The song opens like a crash of thunder. Inbetween rolls, McDermott interjects some playful scat singing. As the first verse begins, the band seems to fade out like an echo, leaving us with him and a gentle piano. He’s bashfully admitting his feelings for his love and flattering her taste in music to convince her to spend some time with him. He uses the scat singing again – technically, to let us repeat the verse without it feeling static, but emotionally it feels like he’s trying to fill the air with noise because he’s terrified that she’ll leave in the silence. As the guitar quietly underlines the conversation, he confesses his feelings again, this time willing to list a few non-pop-culture things, like his favourite colours, and flattering her hipster levels of knowledge. He kicks into the bridge, the full band joining him – he’s laid down the groundwork and gotten a little more confident. He describes her at play, awed by her magical ability to shape reality itself with her dreams, and he assures her she’s going to achieve great things. He brings back the scat singing, gently backed by the band, a little more confident and steady. Thunder rolls again. We come back to the verse, supported by a full band for the first time. He’s casual with her now, unafraid to swear, unafraid to list everyday things that she makes more magical just with her presence, unafraid to call her something that would sound like an insult if he didn’t love her so much for it.

We come back to the bridge, and he describes their fears – the dark and scary things about life that are just around the corner – and he begs her to bring her magic and take them beyond what any ordinary person could imagine. The scat singing this time feels like an attempt to calm down and relax after something heavy, only for us to be struck by the bridge again! The band becomes something chaotic. We’re in terrifying, unsteady territory. The scat singing tries to hold onto us, but the storm keeps pounding down. McDermott reaches into himself and summons the courage to defiantly declare his love’s powers, and the music brightens up with him. He keeps rising and rising, almost impossibly, as she pulls him by the hand up to the heavens until he’s rising above the clouds themselves and then further still, until they reach the moon and hold us there for just a second. McDermott lets go. The scat singing gently guides us as we float back to the ground. McDermott uses one last confession as a full stop to the whole thing. And it’s no longer childlike bashfulness, but a simple statement of fact. 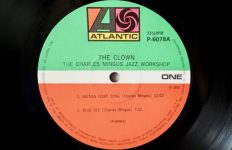