Browse: Home / The Cast and Characters Are What Really Make Terminator: Dark Fate A Delightful Surprise

Here we go again. A robot has traveled back in time to kill a person and another robot has also been spent back in time to protect that person. This time around, the person being targeted is Daniella Ramos (Natalia Reyes), who just works a nine-to-five shift in a factory, her life is pretty normal all things considered. But that all changes once she’s targeted by the Terminator known as Rev-9 (Gabriel Luna), this robotic creation will not stop until Daniella is killed. Luckily, Daniella has got Grace (Mackenzie Davis) to protect her. Grace is a human being from the future augmented with robotic enhancements, she’s a prime fighter to fight again Rev-9. She can’t protect Daniella alone though, which is where Sarah Connor (Linda Hamilton), who’s spent the past two decades killing any and all Terminators that cross her path, comes into the picture as they all try to stay alive and protect the future.

Considering the track record of Terminator movies, the odds seem pretty stacked against Terminator: Dark Fate actually delivering a good movie. Considering that this is also a Terminator sequel written by David Goyer, it would seem like there’s a better chance of me scoring front-row tickets to a Broadway performance of Hamilton for ten dollars than of Dark Fate being any good. Ah, but 2019 cinema is an unpredictable force of nature. This is, after all, the year where a Child’s Play remake turned out to be better than new films from Richard Linklater, Jim Jarmusch and LAIKA. Seemingly to keep the spirit of this rollercoaster of a year alive and well, Terminator: Dark Fate turns out to actually be surprisingly good and entertaining.

What’s most interesting about Dark Fate, which is directed by Deadpool helmer Tim Miller, is that the aspect of it that you’d expect to be the whole point of the production, the action sequences, are actually one of its weakest parts. The action in Dark Fate is rarely bad but it’s also rarely all that creative and too often feels like it goes too big when more intimate brawls would have totally sufficed. An extended duel between two gigantic airplanes, for instance, has its moments of fun but it’s such a sprawling set piece that doesn’t tie into the characters or themes at all, it’s something that could have been dragged and dropped into any blockbuster. As a result, the individual characters of Dark Fate tend to get more lost the bigger the action gets. This is particularly true of Sarah Connor, who doesn’t get to participate in the big second act and third action set pieces nearly enough for my liking.

These set pieces also tend to make use of CGI stunt doubles that are distractingly fake-looking. There’s a sense of tactility to the best parts of Dark Fate but these instances of fake-looking CGI people just take you right out of that. Again, one is left wondering why the action scenes could have been trimmed down in scope so there didn’t need to be as much of a use for rubbery CGI people. While recreating people through CGI means isn’t one of Dark Fate’s strongest suits, it actually manages to excel on a front I totally didn’t expect a 2019 Terminator movie to succeed at, the characters. In a welcome surprise, Dark Fate actually works best in its most intimate character-driven sequences that really allow you to get close to Terminator protagonists both old and new.

There’s a scene about two-thirds of the way through Dark Fate where the movie stops for a small conversation between Daniella and Sarah Connor that really tugs at your heart by allowing Connor, up to this point a figure of awesome action hero might, a moment of vulnerability to show how much she’s struggling to hold onto elements of the past she holds dear. There’s a sense of raw openness here that allows for the characters of Daniella & Sarah to quietly bond over their shared sense of sorrow over the past. This serves as one of a number of instances throughout Dark Fate where the numerous screenwriters credited for the story show a sharp sense of how to make sure the individual personalities of the lead characters shine through in between all the chase sequences.

Some of these small moments include instances Daniella gets to take hold of her circumstances and stand up for herself and others. Daniella could have just been a hostage tossed across action set pieces, but these bits of action on her part allow her to have a more active role in the plot while also showing off her personality in an entertaining manner. Distinct moments of character like that allow the actors assembled for Dark Fate a chance to really show off their acting chops, including Linda Hamilton who absolutely nails her pivotal dramatic scenes while also proving to be a believable force of nature when it comes time for her to pick up a rocket launcher and blow up evil Terminators. Fellow franchise stalwart Arnold Schwarzenegger also comes back for a small role that turns out to be an entertaining delight whose presence actually enhances Dark Fate’s central theme of learning how to create our own destiny rather than coming off as merely fan-service.

As for the newbies to the series, Mackenzie Davis is easily the stand-out. She’s got a great presence in the action scenes (she twirls a chain around like nobody else’s business!) and has enjoyable chemistry with her co-stars Linda Hamilton and Natalia Reyes. The latter of those two performers makes her first foray into American cinema with Dark Fate and it’s a mighty fine debut, particularly in regards to how Reyes portrays Daniella growing accustomed to the presence of robots in her life very quickly. I like that both her performance and the script bypass Reyes refusing to believe all the extraordinary things happening and just get right down to brass tacks with her being along for the ride. That’s the kind of smart storytelling that’s been so gravely missing from all these post-T2 Terminator sequels. Though far from flawless, Dark Fate is enjoyable and well-made enough for it to earn a hearty “Gooooood for you!” from me! 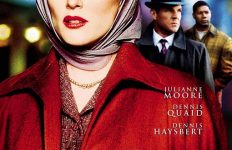