Thanks to the stylin’ scb0212, Drunk Napoleon and Miller for contributing this week. Send articles throughout the next week to ploughmanplods at gmail, post articles from the past week below for discussion and Have a Happy Friday!

Michael O’Malley – known in these parts as Cornelius Thoroughgood – goes long on Darren Aronofsky’s Noah as a worthy object overlooked from both religious and secular points of view:

Most movies of most types are forgotten, often quickly—2021 marks, for example, the 10-year anniversary of the release of Puss in Boots, a film that, despite the continued ubiquity of the Shrek franchise it is a part of, I doubt most people think about often. Christian movies, often ephemeral fluff despite the faithful’s rhetoric that supporting such films is an important part of the battle against Liberal Hollywood and indeed, the soul of the nation as a whole, disappear even more quickly. But in light of its depiction of a dangerously radicalizing core of believers, the obscurity of Noah seems more significant than just the typical pop-culture amnesia, or even the faith-film amnesia—it’s a burying (if not intentional then certainly convenient) of one of the few films directly engaging with faith’s 2010s crisis on the terms that crisis warrants: as an apocalypse.

At Slashfilm, Ben Pearson goes deep into the many factors – including actors’ delivery – behind the crappy sound movies have these days:

Karen Baker Landers, whose credits include “Gladiator,” “Skyfall,” and “Heat,” among many others, has her own term for it. “Mumbling, breathy, I call it self-conscious type of acting, is so frustrating,” she says. “I would say a lot of the younger actors have adopted that style. I think the onus also falls on the directors to say, ‘I can’t understand a word you’re saying. I’m listening to dailies, and I can’t understand.’ No amount of volume is going to fix that.”

Vox‘s Terry Nguyan delves into the enduring fashion iconography of The Nanny:

That isn’t to say The Nanny is all style with no substance. Instead, Fran’s fashion-forward flair was the gateway to my greater appreciation of the series and its tendency for excess through its comedy and aesthetics. The Nanny, both the show and the character, excelled at endearingly doing the most: Yiddish references pepper Fran’s vocabulary; she manages to be brash and self-deprecatingly honest, sweet but not cloying; and her clothes are ridiculously ostentatious for nanny-ing around the house.

At Slate, Rachelle Hampton reports on the popularity of a queer, class-conscious, 500,000 word Harry Potter fanfic:

What makes All the Young Dudes so engrossing is how detailed and invested it is in building a world outside of the one Rowling created. It’s a slow-burning love story told from the perspective of Remus, who is a werewolf, and thus explores the experience of being a gay man in 1970s Britain and being a werewolf in the wizarding society. At the same time, there’s also a lot of class exploration, a dynamic hinted at in the Harry Potter books but more fully explored in All the Young Dudes. Fanfiction as a genre allows for people to write characters into a universe that maybe otherwise wouldn’t have been there or had been given short shrift. Stories focused on Wolfstar, the relationship between Remus and Sirius, fall into both those categories—not least since queerness was largely excluded from Rowling’s version of the Harry Potter universe.

They Might Be Giants talk to The Guardian about how they wrote “Birdhouse in Your Soul”:

The lyrics were stream of consciousness. I was in my apartment in Williamsburg, Brooklyn, and wrote it from the perspective of a night light serenading the occupant of its room. I wasn’t thinking too hard. It was just intended as a dummy lyric, but it ended up as the finished song. People seemed to find it really innocent or charming. Before we appeared on the Johnny Carson show, the scrupulous bandleader made us rehearse it several times using a metronome, but for the actual performance the count had somehow been set 10 beats-per-minute faster. It was hard to sing that fast, but it gave it a nervous energy. The song cemented my decision to never sing in an affected accent. I sang in my own voice and when it was played on the radio in the UK someone rang in to say how irritating she found it that I was doing a fake, thick American accent. It was hilarious.

And last but not least, Vikram Murthi writes about a big Solute favorite for Metrograph:

Near the end of the Repo Man chapter [in his autobiography, director Alex] Cox submits that the writing in Repo Man is better than the direction because it was only his second film after his 40-minute short Edge City/Sleep is for Sissies (1980) and he “hadn’t evolved much.” An uncharitable viewer could attribute the charms of Repo Man solely to the performances, and to Müller’s shooting strategy, which emphasizes two-shots, tracking shots, and limited coverage. But Cox brings more to the table than a clever line and a gung-ho spirit. He erects an outsider’s punk vision of LA, filled with religious grifters and government spooks and errant youths who give something back when a deceitful world kicks them down. Only a worldview hostile to convention and mainstream approval can bring about this type of inhabited urban hallucination. It’s purely atmospheric, long-lasting because it invisibly shapes the frame. 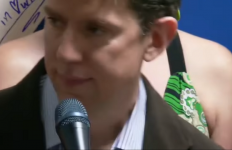