Like the Garbage song goes, it was a stroke of luck. A few weeks after I had finished my essay on Not Your Kind of People, Garbage’s fifth album and their comeback after a seven year hiatus, I was stuck with a case of writer’s block for this piece. What was left to say about the band? They scaled dizzying heights of pop and rock in the 90s, slid into irrelevance in the early aughts, made a popular, anger-ridden ‘Fuck You’ album in the middle of the decade, then went on extended hiatus before regrouping during a serendipitous wave of 90s nostalgia. They are currently at work on an upcoming album and tour, their debut album is about to celebrate its 20th year anniversary, and overall the band seems in a joyous, creative place.

A week ago, to my delight and surprise, my mum was cleaning out her collection of old CMJ New Music Monthly magazines and found a issue from June ’98, with Garbage on the cover, promoting their acclaimed sophomore album, Version 2.0. Now, that album is one of my favorite albums of all-time, a brilliantly layered collection of industrial rock, trip hop, power pop, and electronica that hasn’t lost any of its bite over fifteen years later. Still, flipping through their profile and the magazine’s interview with Shirley Manson, I was hit with an odd, paradoxical feeling of joy, gloom, and curiosity (three emotions the band knows intimately well). The band was about hit a career high and knowing the next decade would be fraught with commercial highs (Bleed Like Me) and lows (beautifulgarbage), along with infighting, label fighting, and general feelings of creative burnout, comes with a bittersweet twinge.

A central theme throughout these reviews has been the question ‘Is Garbage a band or were they just a producer’s side project in creating fad-conscious ear candy.’ My personal answer would be they were an experiment that became a band. Their debut album was crafted more as an experiment in blending alt-rock, trip-hop, and electronica and turning it into pop. They hadn’t even planned to tour, but the album’s success, along with hit singles like ‘Only Happy When It Rains’ and ‘Stupid Girl’ gave them that push. Manson remarked, ‘For so long we were in bands that nobody wanted to see. Now we’re suddenly in this amazingly privileged position–the band is no longer outnumbering the audience–and it’s an amazing, brilliant feeling.’ After years in the shadows, be it in Scotland or the US, they came together at just the right moment where they could freely cobble and sample and turn it sharp, subversive pop music: ear candy with a knowing, acidic kick.

Probably more than any band, Garbage best captured all the different musical trends of the 90s. They may never command the same auteur worship of groups like Radiohead and Nirvana, but their earnest love of every type of music, and their desire to incorporate it into their songs, has a rare admirability. Since the new millennium, it perhaps isn’t unfair to say more and more musicians use certain musical genres for the ‘cool factor,’ while never actually seeming all that into the genre itself.

More than anything, Garbage captured the last days of a music industry that had a greater tolerance for weirdness (if you don’t believe, just look at any of the music videos for Version 2.0), and revealed an interesting paradox: there can be tremendous truth and sincerity in artifice. That mantra isn’t surprising to anyone who fancies themselves a lover of film or TV. But, music is a different beast. Authenticity is frequently championed above everything else, at least if one is to be believe the reviews at Pitchfork. Garbage’s authenticity came from their very inauthenticity, by arbitrary music standards. They were a 29-year old Scottish singer (an age that would be positively ancient by today’s pop standards) and three American producers/friends/former bandmates in their 30s and 40s. But, they were more than a pretty singer and three pop-savvy collaborators. Manson, Vig, Erikson, and Marker all had an intrinsic understanding of the different genres they explored, like alt-rock and electronica. Manson was more than the gorgeous face to the group; she was its heart and soul, a fiery yet vulnerable woman who could alternate between mischievous supervixen, wrathful hurricane, and self-conscious waif, all without it feeling like posturing. All four had all been eager to mess around and have fun, and suddenly, they found the spot light. Over the years, their sampling and experimentation would solidify into their own sound. Experimentation is all well and good and it’s fun to see a band challenge themselves and explore new terrain. However, it can be just as nice to see them comfortably settle into their on groove.

Garbage was a band so of its time, they became timeless. Good pop music, and a good dynamic band are hard to find.

‘It’s so hard for me to be objective about what we do and why people have been attracted to us as a band. It’s so difficult to be analytical about why people have been turned on by our band. I’m not totally naive. I’d like to think it was purely the music, but obviously it’s a little more than that. It’s your music, and how you choose to portray yourself. I mean, I always fell in love with bands not only for their music, but for their image, their look, how they portrayed themselves. And it’s weird when all of a sudden you turn into, like, this subject. I think we made a good record and that’s why people got into it , but I also think we were very honest about our intentions, and we weren’t trying to be something we’re not. And I think people felt that. People felt it was real.’
-Shirley Manson, discussing her stage persona, in an interview with CMJ New Music Monthly

Into the New Year: In this new year, I plan to do occasional reviews of the band’s b-side collections, their documentary Thanks For Your, Uhh, Support, and a look at the each band member’s musical career before they joined Garbage. 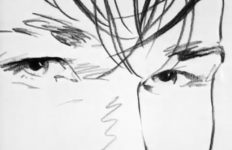 Chartbusting: The Greatest Hits of 1985→ 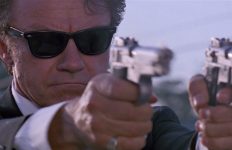 Film on the Internet: RESERVOIR DOGS (1992) on Amazon Prime→