Thanks to Jade, Jared decided not to kill himself. And, he’s changed his will, leaving the Towers to Jade instead of Emerald. But, Emerald found out about it, and now she’s trying to seduce Chet to give her the new will so that she can destroy it. Montana’s planning to kill Jared at midnight so the Towers will belong to Emerald and Montana, but I think she’s going to double-cross him and he doesn’t know it yet. Poor Chet. 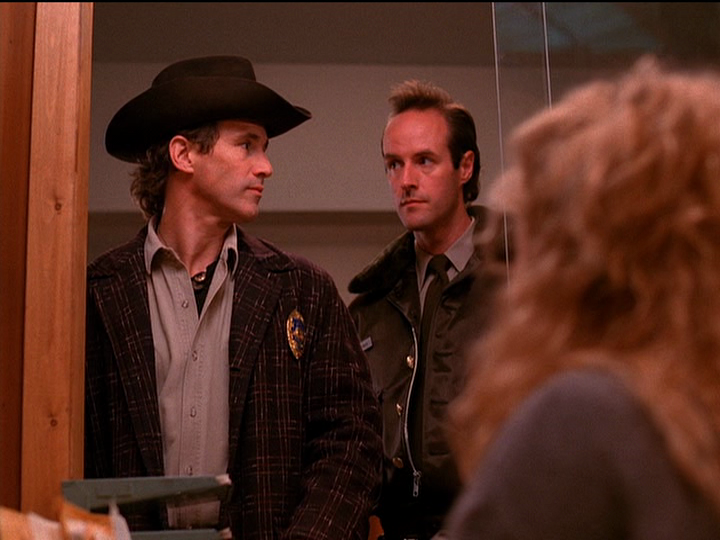 Because Sarah Palmer had a vision of a creepy man behind Laura Palmer’s bed the other day, Deputy Andy can make a sketch of this guy, but nobody knows who he is yet. Dale saw him in his dream a few days ago, and IDs the sketch as “Bob,” but nobody knows which Bob, nor even who Bob is. For some reason, Leland seems to think that Sarah is just hallucinating things, and tells the cops about her vision of somebody stealing Laura’s necklace from under a rock, but thinks that’s a delusion too. For some reason, Donna overheard this vision and realizes that Sarah is talking about James’ necklace, which they had buried the night they found Laura’s body. So, when they go back, they find the necklace is gone. We know, but nobody else knows, that Dr. Jacoby is the one who found the necklace because he was crying with it a few days ago while listening to a cassette confessional made by Laura Palmer. Meanwhile, Dr. Jacoby is being interrogated by Dale Cooper at the police station, where he seems sketchy and defensive at first, a contrast to the sorrowful and regretful Dr. Jacoby we just saw in the graveyard last night. We all know he’s hiding the necklace and the tape recordings, but what else is he hiding? The rock did hit his bottle in the Tibetan intuition game after all. Dr. J says that he followed a red Corvette the night after Laura’s murder, the same night he stole the necklace, but lost track of the Corvette on Old Sawmill Road. Leo Johnson also owns a red Corvette because he’s such a tacky criminal. Leo is still out trying to hide Jacques Renaud, but he’s actually been recruited to burn down the mill by Benjamin Horne. Speaking of Ben Horne, Josie Packard was spying on him and Catherine Martel getting down and dirty at the Timber Falls Motel, plotting to burn down the mill and pin the crimes on Josie. But, Josie knew about the cooked books, and I don’t know how this plot is going to work so somebody must be double crossing somebody else in this scheme. Just because Catherine hid the book doesn’t mean that it doesn’t exist anymore…besides Pete the Poodle can confirm Josie’s story. Poor Pete. At that same motel, the police track down that one-armed man from a couple days ago. His name is Philip Michael Gerard, and he’s a shoe salesman who is visiting his best friend Bob, a veterinarian who was knocked into a coma during a bar brawl in Lotown. Mike and Bob! Like the guys from Cooper’s dreams. Anyways, Dale gets a couple calls from Gordon Cole, who tells him about the twine used in the crime and that Laura was bit by a bird; a myna bird. Putting a couple things together, Cooper figures out that the bird that bit Laura was probaby treated by the Bob the vet, and that one of those birds was in the files, and that’s when they stumble on Waldo, Jacques Renaud’s myna bird. So, they go to arrest Jacques Renaud, who isn’t actually in his apartment. But, Bobby planted Leo’s blood-soaked shirt in Jacques’ apartment that he got from Shelly that morning while they were making out while Leo was off trying to get Jacques across the border to a hideout. So, now, through planted evidence, Jacques and Leo are tied together, even though they actually are tied together, and that shirt might be evidence that Leo Johnson killed Laura Palmer. Still, Donna and Audrey don’t know any of this and are trying to get to the bottom of things in their own way. They hatch a plan where Audrey is going to try to work at Horne’s Department Store in the perfume counter because that’s where both Ronette and Laura worked before Laura was killed and Ronette brutalized. So, she manipulates her father into loving her so that she can double cross him and get to the bottom of the killing, because maybe it was Ben Horne who killed Laura Palmer, even though most signs point to Leo. Though, I’m curious what role Hank Jennings plays in all this. He’s Norma’s husband, and is about to get out of jail on parole, with the help of Norma’s testimony. But, his crime is still a mystery and he’s sending cryptic drawings of dominoes to a frightened Josie, who seems to think this is very important. Oh, as for me, Lucy? I’m mad at Andy for some reason, but I won’t tell them yet and the cops think I’m just being a dumb girl. So, they can just sit and wait until I’m ready to tell them what’s wrong. 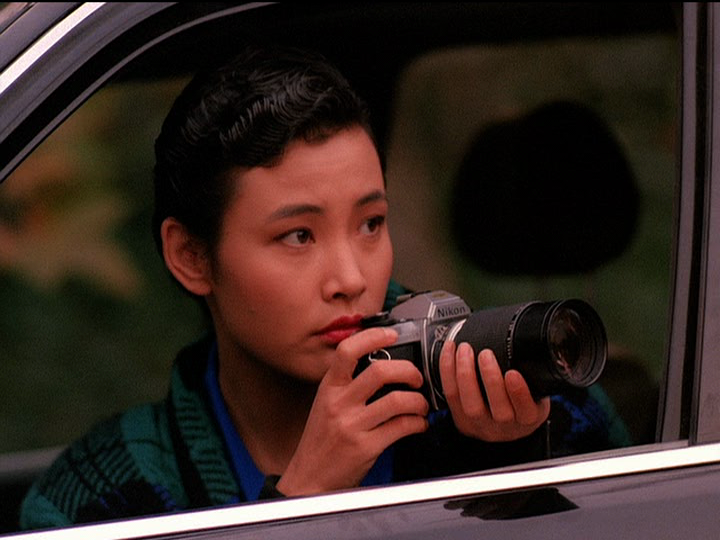 The weight of yesterday’s funeral has not eased the residents of Twin Peaks, WA. The mystery of who killed Laura Palmer still hangs in the air, like an oppressive fog threatening to smother anybody who dares to remember. The fate of the mill – where Laura Palmer’s body washed ashore – is still being wrestled over by the moneyed people who have plenty of golden parachutes they refuse to offer to anybody else. Laura’s death shattered the life and interpersonal connections of everybody she touched. In her absence, the town rearranges their relationships to cover over and heal the hole that she left in her wake. As Robert Frost once said, there is no way out but through. 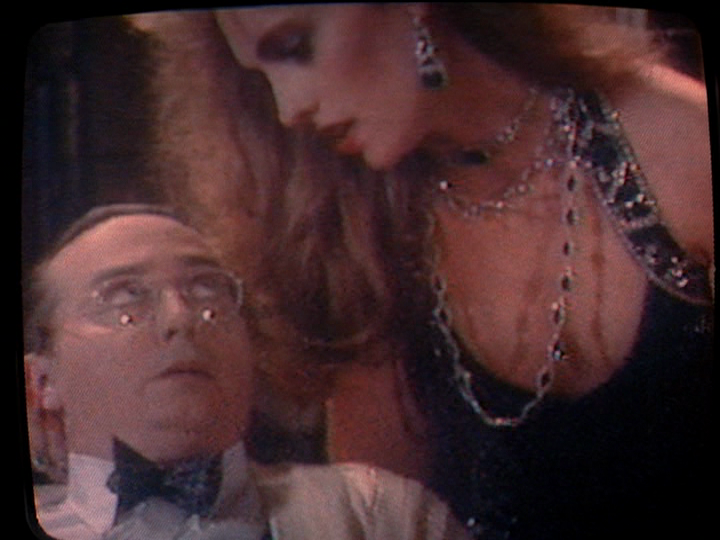 Remember how I said that soap operas love going over points again and again? This episode is the first episode of pure soap opera mechanics. Some plot points are repeated, some plots move forward in incremental fashions. Some move forward in larger steps. But, this episode is all about those small steps of planning that will lead into the explosive season finale. When Lucy Moran recites all of the minute plot developments happening in the soap-within-a-soap Invitation to Love at the beginning of the episode, it’s Twin Peaks admitting that this episode just moves the plot ever forward. 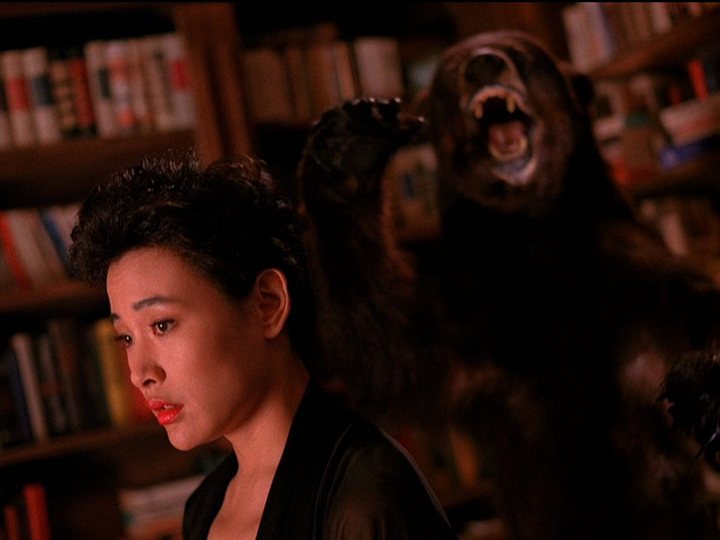 There seriously isn’t much in this episode that’s anything other than either recapping previous events, or dealing with the minutia of moving the various plots forward in incremental ways. There’s even a character introduction – the one-armed man – who is discarded as soon as he provides his vital information. It all feels so…”this needs to happen, so we’re just going to throw it all in this one single episode.” It’s not really a bad episode – there’s a lot of intrigue and double crossing and heavy plotting – but, it isn’t nearly as rich as the previous four episodes have been. If you’ve noticed, now that Laura Palmer is buried, she is almost taking a backseat to the machinations of the plot. This is the first episode where the soap opera suds get a little too sudsy. Remove the mystery of Laura Palmer and the compelling doom of the mill, and this is the type of episode that the back end of Season 2 would have put out. 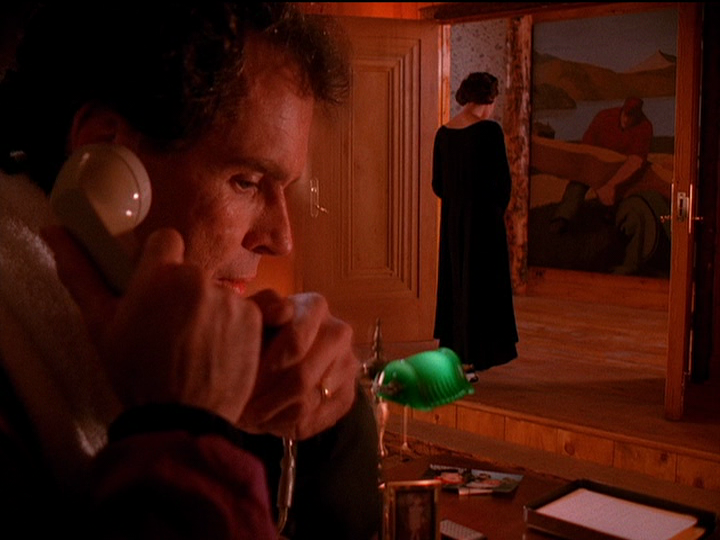 But, like I said, it’s not a bad episode. It’s just not a great episode, like the previous four. Incidentally, this is the first episode where writing credit belongs to Robert Engels (who would pen Fire Walk With Me) and the first episode directed by Tim Hunter, who later directed the Reveal episode. The plotting comes together nicely, and there are some great images in here, including some great rack focusing between Norma and Hank at the Parole board, this split diopter shot between Ben and Audrey, and the above Dutch angle for Josie when she realizes that Hank is coming for her. But…yeah…Have at it in the comments on this one.