The Back Half of Season 2 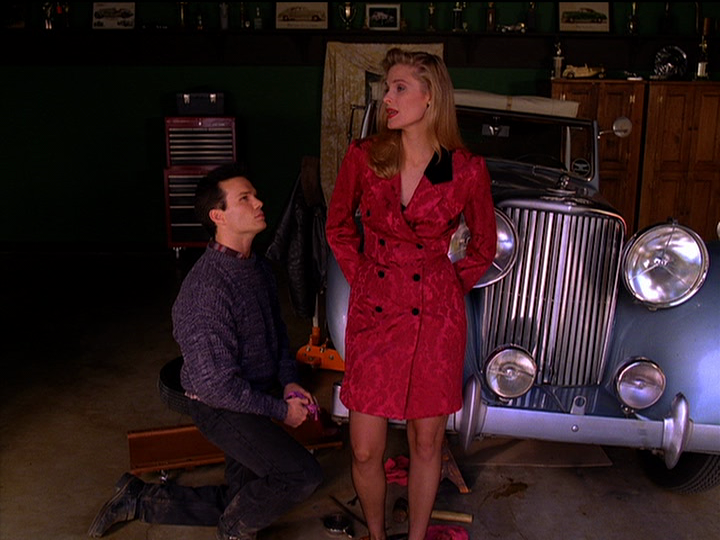 These episodes begin with James riding along the road, off to commit us to The Worst Plot Ever. There are a lot of reasons James’ plot is the most intolerable of the goofball plots, but the most egregious element is that the plot takes place outside of Twin Peaks and that it involves no other denizen but James. It’s not like James is the most interesting character by himself. He constantly defines himself by the women around him, and is one of the most passive characters of the show. He alternates between a small range of emotions, from hurt puppy dog to angry hurt puppy dog to lovestruck hurt puppy dog. And yet, here’s a whole story arc for him to spread his wings and fly…except…he doesn’t. He remains a passive character who constantly says what he’s doing and feeling is wrong, doubling down on the emotions he feels towards Donna. James is SO boring.

His exclusive story finds him motorcycling off to a bar and sharing a drink with a rich femme fatale who hangs out in dive bars trying to pick up lost boys with mechanical abilities. Evelyn Marsh is married to an abusive rich guy with a classic car that she dinged up somehow, so she hires a no-nothing like James to fix it without paying him. Sure, he gets a room for the night and might even get to have sex with Evelyn, but mainly he’s hanging out with her “brother” who is moonlighting as the servant. So, I guess that counts for something. She has designs of her own, and the plot could almost fit into the Twin Peaks universe because of the neo-noir style and focus on lying and duplicity. But, none of the new actors are talented (Annette McCarthy would go on to act in a few Baywatch episodes before disappearing) enough to wring any substance from the ham-fisted dialogue. It’s all so…tacky. 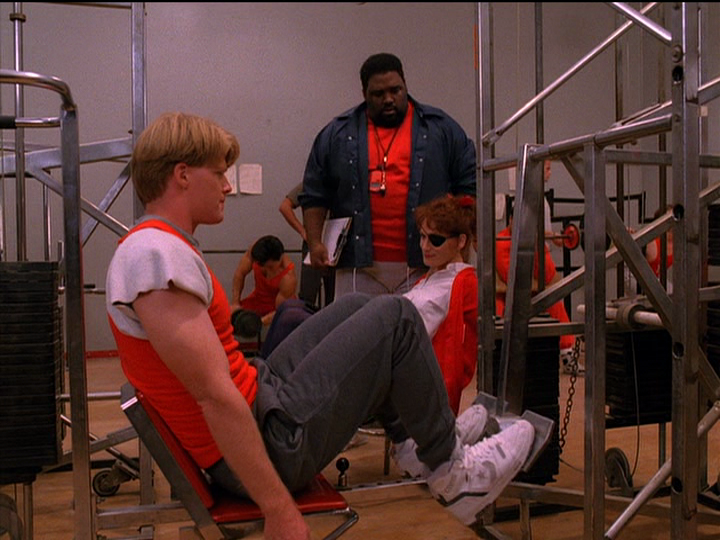 James’ plot isn’t the only terrible plot here. His Aunt Nadine is fully committing to her next goofy plot. Now that she’s a cheerleader who just put a guy in traction, she has fallen in love with Mike from the football team, Donna’s ex-boyfriend. Trying to seduce him, she lifts a whole stack of weights on the leg machine, and gets invited to the wrestling team, where she will get the chance to paw at all the teenage boys with her meaty hands. This whole story is about an old woman with superhuman strength who thinks she’s a high schooler and seducing a potentially-underaged boy. It’s hilariously perverse but not complicated or deep. Nadine has always been a source of goofball antics (those drape runners!), but she had previously been restricted to 1-2 scenes per episode, a D-plot so to speak. In episode 18, she gets three scenes all to her goofy self, and a few more in Episode 19. Her quirkiness is elevated from the D-list to a B-plot in a sea of B-plots. The elevation in status overweights her story unfairly. A goofy scene like Nadine throwing Mike around the wresting mat while demanding he take her out on a date is quite delightful in another context. In the brighter, goofier Twin Peaks, the scene is just another quirky comedy scene. 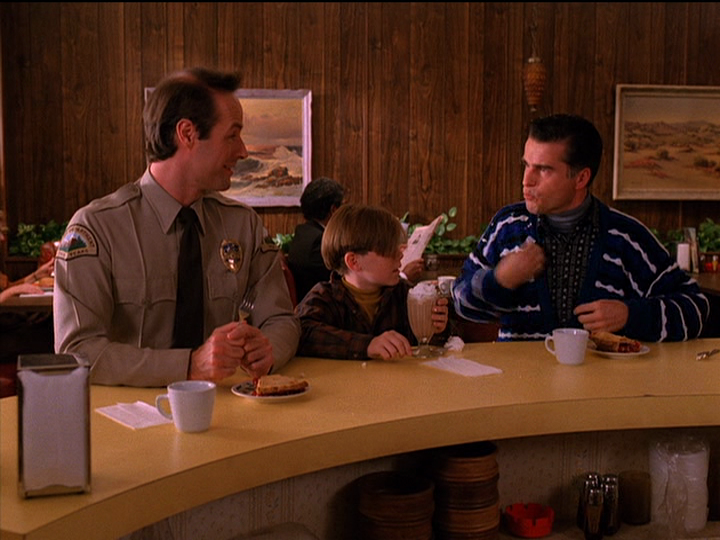 Exacerbating her problem is the new goofball story line from Andy, Dick, and Lucy. Dick has adopted a young boy as part of a goodwill charity device and to demonstrate that he can be a good father. Except the young boy, Little Nicky, is a terror. In actuality, Little Nicky is the closest story to Twin Peaks‘ original intent than any of the other story lines. Little Nicky is an orphan whose parents died in a firey accident, and he’s been rebelling hard against anybody who tries to get close. Throughout the story, Nicky plays pranks on Andy and Dick, challenging them to get pissed off. His constant level of meanness cause Andy and Dick to think he’s possessed by the devil. Or, maybe he’s the devil incarnate. Duality, the existence of otherworld spirits, and what’s behind somebody’s rebellion; these are all classic Twin Peaks plot elements.

Hank and Vivian’s new ex-con husband return from their hunting expedition at One Eyed Jacks. If you remember, Vivian and her new husband were on honeymoon when they came to Twin Peaks. Then Hank takes the new husband to a brothel for a couple days where they get hired by Jean Renault to get involved in revenge against Dale Cooper. Meanwhile, Hank tells the increasingly unstable Ben Horne that Jean is now in control of One Eyed Jacks and Hank is now under his employ. This is all some sort of statement on capitalism and how it used to be good but has been corrupted through greed. Ben Horne was watching a video of his family as they broke ground on the new The Great Northern Hotel some 40+ years ago, and it all seemed like a fresh promise of good citizenry. Now, he’s burned down the mill and gambled away a fortune. Poor Ben.

The Milford’s succubus plot is kicking into high gear as Dougie Milford marries Lana Budding. Lana is a seductress where every man hangs on to her every word. She marries Dougie in the evening of Day 20 and he’s dead by morning. When she’s brought in for questioning, every man in the police station instantaneously becomes obsessed with her, including Andy who dares refresh her glass of milk while she’s talking about her underwear. The only person who doesn’t become infatuated with Lana is Lucy, who can’t even get Sheriff Truman to pick up the phone. 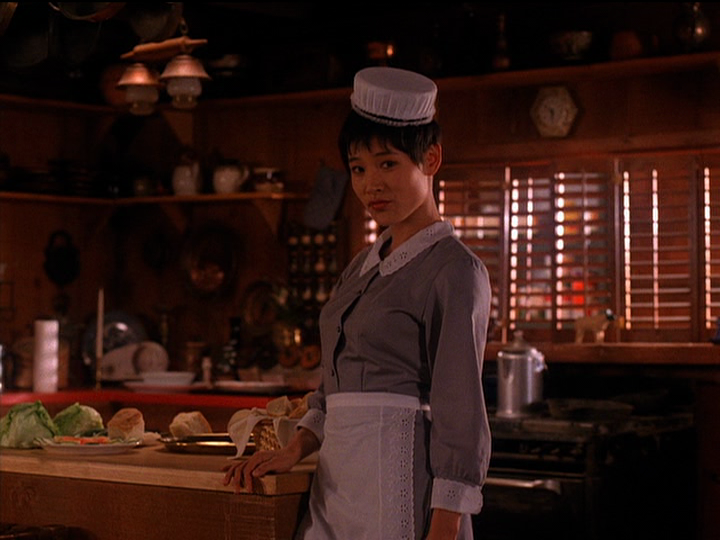 Josie is back and tells Sheriff Truman a tall tale about her origins. She said she was an orphan prostitute who was taken in by Thomas Eckhardt when she was a kid. He took care of her, taught her how to fight, taught her the business, and used her body when he felt like it. Then, she married Andrew Packard, making Thomas jealous. Now she believes that Thomas was responsible for Andrew Packard’s death and she’s in trouble. Well, she’s in trouble all right. Andrew is back from the dead (he’s been gone for like a year), and seeking vengeance. He and Catherine both know that Josie set up Andrew’s death, and turn Josie into a maid with all they evidence they have on her. In actuality, they’re luring Thomas Eckhardt into their trap so they can snare the mastermind. Catherine is the only one who sees Josie as she is, and treats her like a servant ready for humiliation.

Twin Peaks has had more than its fair share of subpar B, C, and D-plots (Nadine’s drape runners!), but the A-plot tied them together and hid their subpar-ness. Rarely had there been so much goofiness struggling to keep the audience’s attention, and they’ve never been so segregated. Here, the A-plot just isn’t all that interesting. Cooper is under investigation for drug involvement after being framed by Jean Renault and the Canadian Mounties. But, we don’t even get to go on half of this investigation. Instead, we’re stuck with Dale whose actions consist of sitting around and asking questions, and people occasionally talking about the Black Lodge and the White Lodge. 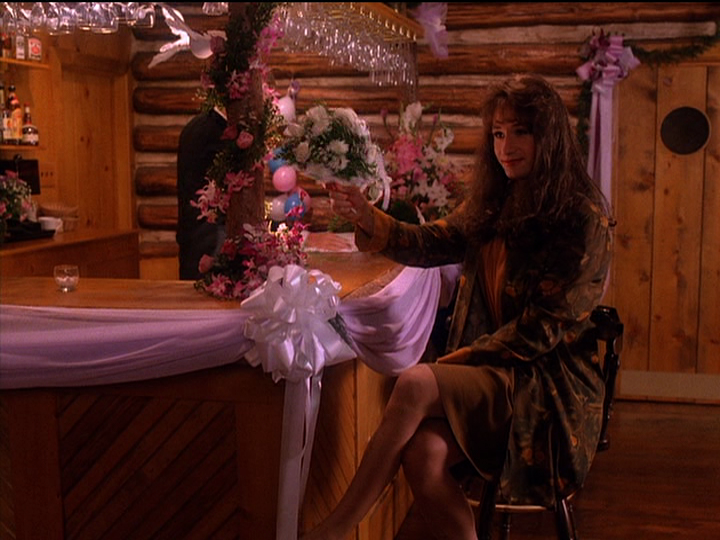 There is one shining moment of the A-Plot: Denise Bryson. Formerly Dennis Bryson, Denise is a transwoman DEA agent who discovered her feminine side after dressing like a transwoman in a sting operation. There are many routes to genderqueerness, and this route is just one of them. There was a documentary making the circuits called Uncle Gloria: One Helluva Ride! where a guy dressed up as a woman to hide out from his ex-wife’s lawyers, and discovered she was a woman (eventually becoming a dominatrix!), mirroring the accidental steps into genderqueer identity of Denise Bryson. Twin Peaks treats Denise with such humanity, even if Hawk and Harry are initially stunned by her presence. It doesn’t judge her for her identity, and it doesn’t make her into a freakshow (especially considering the other story plots). It’s a blissfully humane touch for mainstream television.

Denise is great at her job too. Cooper is looking into buying property and happens upon Dead Dog Farm, a “mysterious” farm where Jean Renault’s gang have been cutting their cocaine with baby laxative. The real estate agent called it a puzzle of a property. At the same time, Ben Horne has hired Bobby to follow Hank Jennings and take incriminating photos. Bobby has the photos developed and shows them to Audrey who takes them to the cops. Denise is able to spot her mark, Vivian’s ex-con husband, who then confesses to everything so he won’t be put back in the slammer. They concoct a plan to ensnare Jean Renault by doing a sting operation where Denise will dress like a man again, a mirror of when Denise first dressed like a woman for a sting. This A-Plot is the only one that moves anywhere, but it doesn’t really do much because it says so little about our world. It’s just a moderately OK TV plot. Even with the lightning during the confession, this plot never comes across as anywhere near as dark or as intimate as the first few episodes where everybody was fucking everybody while people uncovered a plot about drugs, incest, rape and murder. 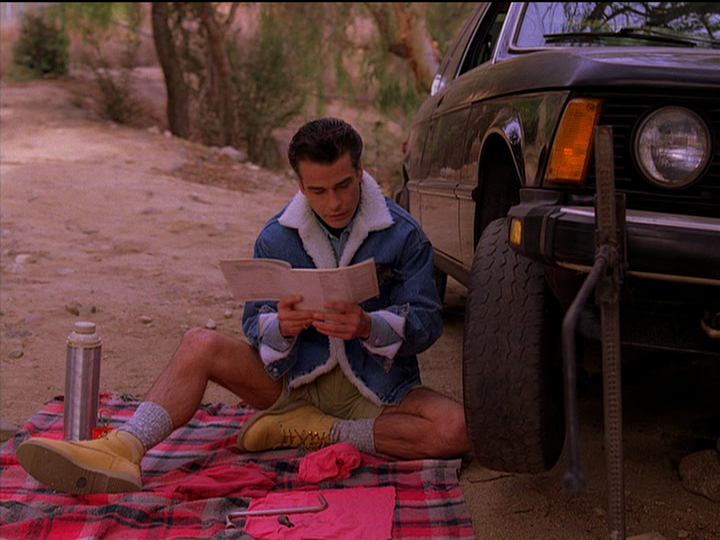