Over the course of Day 8, all of Season 1 has been resolved. And, I do mean all of it. The Mystery Man “J” is not Leo Johnson, but James Hurley, who did not kill Laura Palmer. Leo Johnson, whose mere mention broke the bottle in the intuition game has been absolved from Laura’s murder. As such, so has Jacques Renault. Dr. Jacoby’s involvement has been info dumped. We know how the murder happened, where it happened, and when it happened…but not who did it nor do we know why. Clues in The Secret Diary of Laura Palmer point to a new killer (Ben Horne), but are not definitive.

But, it’s not just Laura Palmer’s murder that’s been solved. Hank Jennings is out of jail, rekindling the romance between himself and Norma. Norma and Big Ed have called it quits, and Big Ed and Nadine are back in love. Bobby seems to have forgotten all about James after he pulled his cocaine stunt, and now he’s free to mack on Shelly since Leo is in a coma. The “are they really?” tension between James and Donna has downshifted into “Yes, they are.” The mill has burned, making way for the Ghostwood Development Project, and Josie and Catherine – the two protagonists of that story line – are missing. Even Invitation to Love is gone!!

So, it’s rebuilding time. Here are the remaining mysteries:

If Episode 8 was a closure episode, Episode 9 reopens the series with a whole bunch of new seeds and plot lines to develop as the series continues. David Lynch is back in the director’s chair, so you know things are going to get weird…

How weird is it?

It is so weird that mini-David Lynch makes a huge deal out of creamed corn.

But, I’m getting ahead of myself. 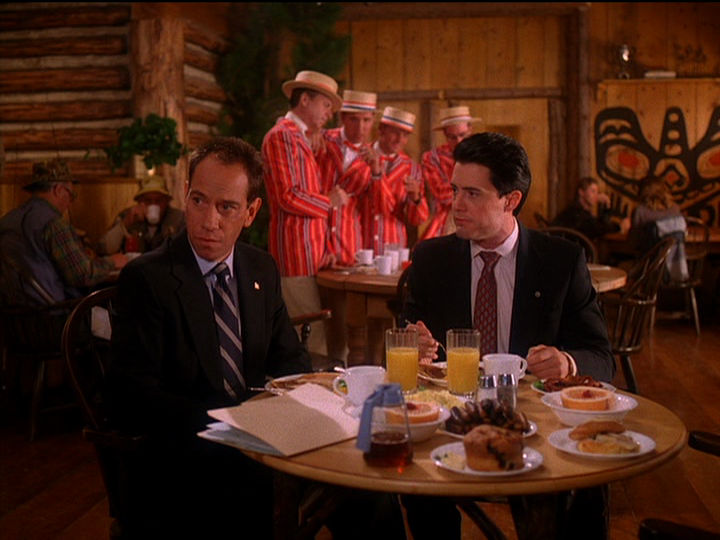 It’s so weird that Albert cracks jokes at that morning’s breakfast at The Great Northern. And not just wisecracks insulting everybody around him. “I….uh…performed the autopsy on Jacques Renault. Stomach contents revealed, let’s see…beer cans, a Maryland license plate, half a bicycle tire, a GOAT, and a small wooden puppet that goes by the name of Pinocchio.”

It’s SO WEIRD that Albert asks Dale how he’s doing. “I believe it is customary to ask after the health of one recently plugged three times.”

Even Dale is weirded out by Albert’s change in behavior at breakfast. But, it is keeping in tone with the sea change presented in this episode and the last. Cooper’s dreams about another place have been replaced by The Giant with the White Light. Suddenly, new characters are being introduced and older characters are being left behind. Some of the old story lines take random wild new twists. There’s a lot of change, and it comes by fast and furious.

The latest of these changes is the introduction of an upcoming big bad. At the end of breakfast, Albert drops a name that seems innocuous enough, but stops Cooper dead in his tracks. Windom Earle, Cooper’s old partner, has escaped from the sanitarium where he had been held. Windom Earle has a huge backstory with Cooper, but none of it matters until the second half of Season 2. He’s just a seedling of an idea – an ex-FBI agent who went crazy – and it all gets revealed much later. Windom Earle’s arc follows the same plot arc as many of Buffy the Vampire Slayer‘s Big Bads…but, again, we still have more weirdness to get to. 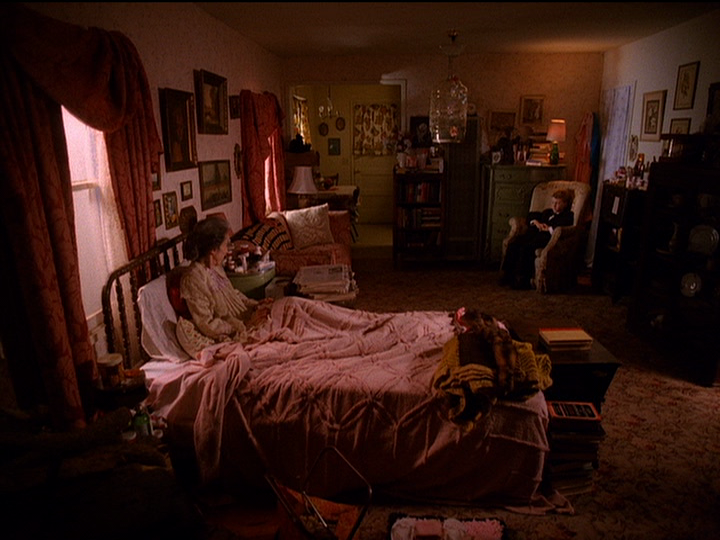 Donna investigates the Meals on Wheels, and stumbles into the den of a pair of new Black Lodge spirits: Mrs. Tremond/Mrs. Chalfont, and her grandson Pierre. Mrs. Chalfont and Pierre make their first chronological appearance in Twin Peaks: Fire Walk With Me, renting out a trailer space in Deer Meadow, OR in the same trailer park as Teresa Banks. Her grandson, Pierre, wears a mask with no holes in it. Later, Mrs. Chalfont gives a painting to Laura when she is making her rounds doing the Meals on Wheels. That painting, in Laura’s dream, leads to her taking the ring she was told not to take.  They also both appear as people in the Black Lodge meeting that Philip Jeffries (David Bowie) rants about in his brief appearance.

But, their first appearance in the series is actually in The Secret Diary of Laura Palmer as the Tremonds, when Pierre makes a magic coin appear in her ear. Pierre Tremond is a striving magician, and his first appearance here is making creamed corn disappear. Last episode, Blackie was seen doing a Tarot reading, with the Celtic Cross formation. The magician usually has a hand pointed to the sky and a hand pointed to the Earth, representing the bridge between the spiritual and the natural worlds. Remember, his grandmother gives the painting that transports Laura to the Black Lodge. He makes a magic coin appear in Laura’s ear. And, he even makes creamed corn vanish from the earth.

When Donna delivers the meal from Meals on Wheels, she opens the tray to reveal a lovely meal for old people. Except the meal includes creamed corn, and Mrs. Tremond chides Donna, saying that she said there was to be NO CREAMED CORN. What’s the big deal with creamed corn? In Fire Walk With Me, the creamed corn is a real world manifestation of “garmonbozia” which, in permanent subtitles, is defined as “Pain and Sorrow.” The spirits of the black lodge feed off the pain and sorrow that they create through their various misery creations. Before Donna can fix the problem, Pierre the Magician takes the creamed corn and makes it vanish into thin air. Whose pain and sorrow did that represent? Maybe it is the pre-garmonbozia for what happens to poor Harold Smith, their next door neighbor. They may be the forces keeping Harold Smith within his apartment through his agoraphobia.

With Ronette’s awakening comes…well…what we already know from the end of last episode if not the majority of last season. BOB is the man who killed Laura Palmer and terrorized Ronette Pulaski. But, nobody has seen BOB on Earth in the last few weeks. Still, Dale Cooper and Sheriff Truman have to verify this because its a procedural and they don’t actually have firm confirmation. Despite Ronette being non-verbal, she flies into a fit when they show her BOB’s sketch, saying train car. Yes, we covered this last episode.

But, there’s an interesting connection that happens in this episode. Major Briggs, one of the more no-nonsense figures in the show, has a lunch meeting with The Log Lady at the Double R Diner. Her log has a message for Major Briggs. That message is “Deliver the message.” Earlier, I posited that the Log was a vessel for The Log Lady’s problematic thoughts. But, Margaret and The Log have a spiritual connection to the white lodge. They at least seem…not evil. And they know that Major Briggs intercepted a communication aimed at Dale Cooper.

Major Briggs works on a top secret operation that “monitors deep space radio signals” and tries to discern patterns or intelligent life. But, most of it is relative gibberish…that is, until last night. That’s when they received a sentence and a repeated word. The messages they intercepted come at the times that Cooper was shot and visited by the Giant: “The Owls Are Not What They Seem” and “Cooper Cooper Cooper.” Later, Major Briggs reveals that he is part of a super secret project looking for the White Lodge; these signals came as part of that search. 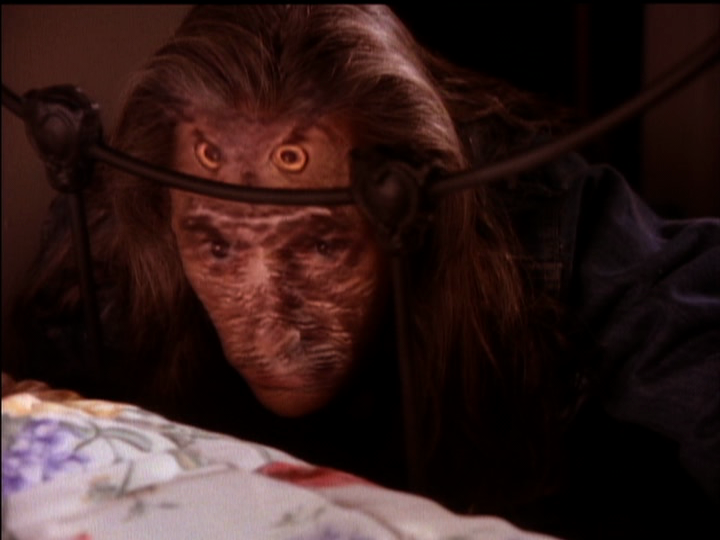 What are the owls? What do they represent? They were flying while Laura was being killed. When she was finally dead, they were silent. They’re vessels or representations of the Black Lodge spirits. By the end of the episode, while Dale was reliving the day’s events, BOB appears with an owl superimposed on his face. Is he an owl? Do owls take over normal people? Before the episode ends, Bob terrorizes Maddy once more, climbing at her in the Hayward’s living room, climbing ever closer and moving everything in its way. Poor Maddy.

And, of course, there’s the other soap opera stories that are rolling down. 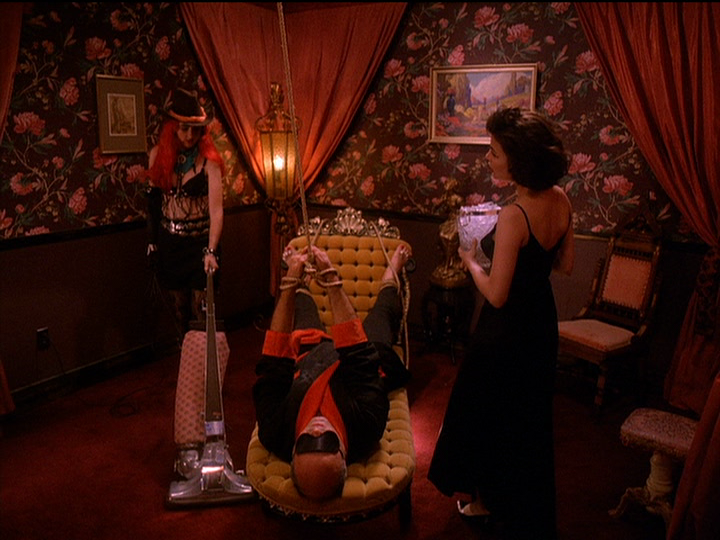 Audrey is trapped in One Eyed Jacks. When Mr. Battis comes in to get his fetishes attended to – he likes being tied up in women’s clothing and painted nails while women vacuum around him – Audrey gets him to triple confirm that her father is the owner of One Eyed Jacks, even though she already knew that last episode. He does say that Laura once did get recruited there but was fired from the whorehouse due to her drug use. Of course, that means that Mr. Battis can now inform Blackie of Audrey’s true identity. When Audrey tries calling Dale for help, Blackie puts the kibosh and officially kidnaps her. 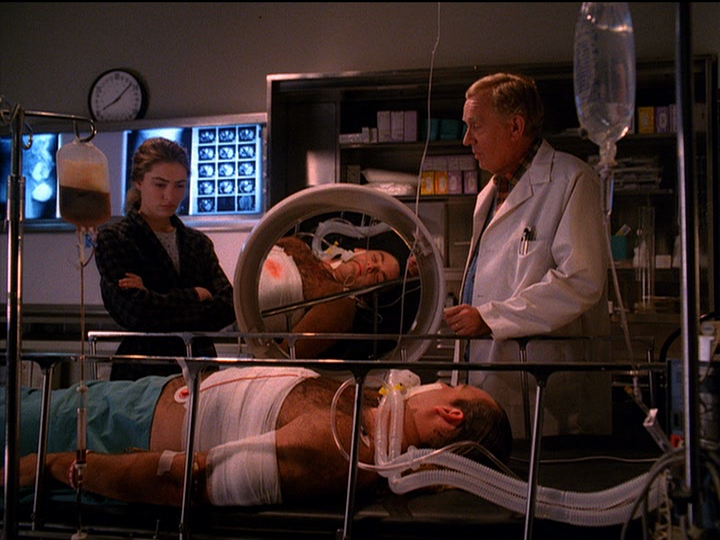 After being shot by Hank a couple episodes ago, Leo is still in a coma in the hospital. Shelly wants to keep it that way; after being abused by him for years, she wants to keep him out of the house. But, Bobby sees dollar signs, and says that Leo can get $5k per month as long as he’s out of jail. Which means that Shelly, the only material witness that Leo is the one who lit up the mill, will have to not speak against Leo and refuse to make him guilty. Those crazy kids. 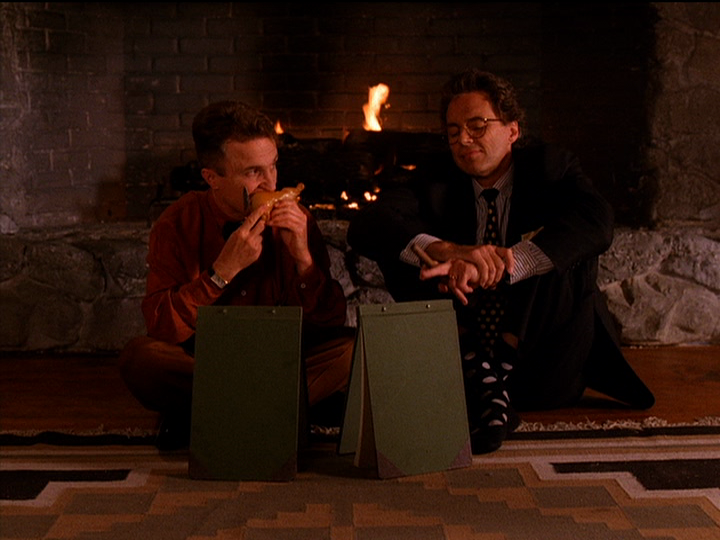 Speaking of the mill and the Ghostwood Development, the brothers Horne are trying to figure out how to move forward. They have two ledgers, one cooked to show the mill is successful and one actual showing the mill sliding into bankruptcy. One can be used to indict Josie and/or Catherine if they every show their face again. The other can be used to increase the profit from their sale. Something must be destroyed to save their asses, so they burn some marshmallows! But, then Leland wanders into the scene and tells the Icelandic investors about the mill burning, which sends them into a tizzy. Oh, Leland.

And, finally, James is struggling between his love of Donna and Not-Laura (aka Maddy). At night, they sing a romantic song in the vein of shallow 1950s dreampop. Both Donna and Not Laura are in lust with kicked puppy James, and the battle between the two causes Donna to storm out in jealousy, and James to follow. Poor Maddy.