As previously discussed, it was declared that by 2007 mumblecore had run its course.  But in that same year, a film raised the stakes for how the genre could be viewed.  It should be pointed out that having a largely inarticulate protagonist had been earlier featured in films such as Wanda (1970) and Safe (1995).  Traditionally, this lack of voice had been viewed as a feminine trait; of course, males who were strong and silent were regarded as more appealing. With the exacting attention mumblecore paid to social roles, it was inevitable the connections between language and masculinity would become reexamined.

The film we will now discuss takes the aesthetic of mumblecore to its ultimate conclusion: what if there were a guy who was really inarticulate?  Who, in fact, could barely communicate at all?

“My Smile Is Stuck”: Frownland

With the emphasis that mainstream Hollywood films tend to put on communication, its absolute failure suggests something fantastic, a crisis more fitting for a science fiction/horror narrative.  Certainly the title of the film that references a song by Captain Beefheart (a groundbreaking artist whose recorded output, from the late 60s to late 70s, remains essential for anyone interested in experimental music) evokes a dystopian vision.  The song’s opening line, “My smile is stuck/I cannot go back to your frownland,” paints a searing portrait of alienation.

Yet apart from the dissonant rumblings of a synthesizer on the soundtrack that make the social encounters of the protagonist, Keith, feel even more uncomfortable, the film hardly appears futuristic; rather it is dedicated to depicting the harsh and grimy reality of young adults just scraping by in the overheated environment of New York City.

We are pulled into Keith’s world, the mundane and soulless routine of door-to door soliciting for an ethically questionable charity.  Despite the jagged rhythms of the scenes, time seems to stand still, until we see an exterior shot of the night sky: a day has passed with our barely being aware of it.  It is a world that is collapsing, drained of happiness, emptied of energy, save the raw ache of desperation.

As Keith, Dore Mann gives a truly unsettling performance. Not only does he not try to smooth any of the rough edges of Keith’s personality; he looks completely lost: we’ve all felt this way hopefully only for a few moments at a time.  But Keith can’t ever regain equilibrium.  You don’t know whether to laugh or cry—and in the time it takes to make this decision, what is witnessed is perhaps one of the barest pictures of the human form ever shown onscreen.

In perpetual misery, Keith can’t tell anyone around him what he wants, much less what he needs.  Responses to his lack of social skills vary; many ignore him, some exploit him, even assault him.  Yet those who are also stuck in the bleak landscape of Frownland have difficulty as well communicating and are similarly frustrated.  Charles, his roommate, is a pathological liar (thus he never says what he means), while the guy Charles runs into during a test session for being hired as an administrator spins verbal circles around him without ever making clear what he is trying to say—reminding us that intelligence is not a sure-fire remedy for communication problems.  Keith’s boss, Carmine, speaks with the blunt force of authority, but looks no more satisfied with his lot in life than anyone else.

Since language and meaning are ripped apart, the sounds of the words have an elevated presence, becoming musical, sometimes melting into the ambient noise. As lead performer, Keith’s grating, repetitive delivery sounds like a primal free jazz riff in a locked groove.  Charles’s efforts to maintain a cool detachment through sarcasm has a bitter tonality like the synthesized music he programs for an imagined cyberpunk film soundtrack.

The scenes featuring Charles drive home the idea that, while Keith may be a sweaty mess of a human being, it is Charles who is the real asshole.  His berating of Keith makes all the more visible his smug narcissism (also signaled by the posters of bands and films considered  hip a decade earlier on his bedroom wall),  And his dishonesty about paying the electric bill results in the power being shut off.  The nighttime inside and outside world have become equally dark, giving the impression that things are coming together in the worst possible way for Keith.  After a fight with Charles, Keith is further beaten up by his long-suffering friend, Sandy, who is pushed over the edge by Keith’s desperation to tell him about the earlier altercation with Charles.

In the next scene, Keith, with a bloodied face and shirt, runs down the street in search of a bathroom in which to clean up and recompose himself.  He ends up at a bizarre party, with loud music and smoke; people are laughing but we don’t know why.  This is where Ronald Bronstein’s acidic humor really comes out: the film maintains a pose of objectivity, but we sense something awful is going to happen—and surely enough the film waits a few beats before strangers start to harass Keith.

It would be rather easy for the film to convince us that all of the turmoil is in Keith’s head.  Instead, Frownland shows us a hateful, hurtful world in a more powerful way than The Devil, Probably (1977), that infamous parable of punk nihilism written and directed by Robert Bresson.  Unlike this film, there is nothing in the world for Keith to reject—it feels the other way around, as if the world has rejected him.  And while it would be tempting to do so, it would be best to avoid talking about the creation of a new film language when discussing Frownland, because the one thing it does, above all, is to question the regarding of style as any kind of a concern that an ethically-minded filmmaker ought to have.

It’s not simply that we care about Keith because no one else in the film does, or that the close attention that the film pays to him affords us the opportunity to feel his anxiety.  Like in the films devised by Mike Leigh, whose early work, such as Bleak Moments (1971) and Nuts in May (1976) Bronstein cites as an influence, we see Keith as an individual trapped within a system whose ends, like in real life, are frustratingly opaque.   There is no fantasy of tearing it down and starting over again, a point that will be startlingly rendered in the closing image.

There is now a sudden tonal shift away from the drab realism of scenes such as Keith’s attempt to console his girlfriend and Charles’s search for a job.  In a final moment of exile, Keith emerges from the building where the party was held and into the sunlight of the early dawn.  It is a heartbreakingly beautiful moment—in a film that does its best to avoid any sense of visual harmony.  Yet we can’t resist the thought that, for Keith, the new day will most likely be nothing different.

At the same time, maybe the insistence of Captain Beefheart’s song that another world exists could, somehow, be made more believable by what we have just experienced:

It’s not too late for you

It’s not too late for me

To find my homeland

Where a man can stand by another man

Without an ego flying

With no man lying

‘n’ no one dying by an earthly hand 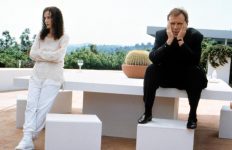 Year of the Month: Watching THE NEW AGE from the Point of No Return→ 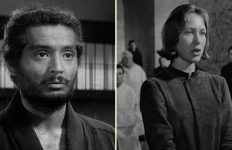 Year of the Month: Jake Gittes on Harakiri and The Trial of Joan of Arc→ 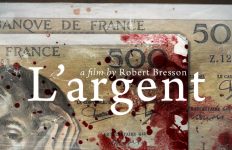 The Root of All Evil: Jacob Thomas Klemmer on Trading Places and L’argent, The Twin Radical Films of 1983→