This is how Michel Delassalle (Paul Meurisse) dismisses any stories his wife has heard from his mistress.  He’s telling her the truth, as it turns out, but in a way that guarantees she won’t take it in or even notice it.  It’s the same technique deployed in the French title. Les diaboliques: The devils, plural, in this case not only in the details but often brazenly in the big picture as well.  It’s all right there.

Clouzot is a master of directing the viewer’s attention to the wrong detail or the wrong problem.  It’s partly a genre trick—Diabolique is a con movie disguised as supernatural noir.  Worry enough that the couple in the apartment above Nicole’s have good reason to remember the oddity of when she ran her bath and when she drained it, and you could miss, say, the way the opaque tablecloth tightly stretched over the tub would allow Michel to come up for air without being seen.  Cringe when a drunken soldier almost stumbles upon the trunk carrying Michel’s body, and on a rewatch, learn that what Nicole is really afraid of is that the soldier will discover—and reveal to Christina—that that body is still alive. There’s no better example of this than the school’s stagnant, clouded swimming pool, which at one point ostensibly has Michel’s corpse at its bottom.  The opacity means, Christina thinks, that they’ll have to get someone to discover the body. The opacity means, Nicole knows, that Christina won’t be able to see that the body is already gone.

The bow on all of that is the wet, visceral smacking sound the boys’ ball makes when it hits the water.  To quote one of our former hosts, that shit… is cinema. 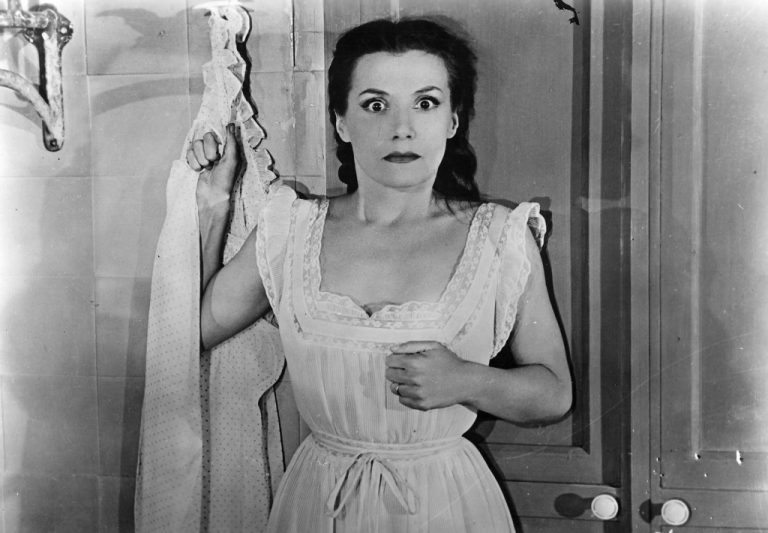 And Diabolique is definitely cinema.  It delights in its visuals.  There’s innocent Christina in gingham and braids, crucially not French, looking like Mary-Ann from Gilligan’s Island; Nicole tall and strong in her black dress, her hair blonde as Phyllis Dietrichson’s.  The wooden bars in Christina’s bedroom cast prison shadows everywhere as she wanders through the dark halls in a long white nightgown, the heroine of a ghost story receiving (she thinks) a ghost’s retribution.  Most of all, there’s Michel’s slow rise from the tub, his shoulders impossibly broad, his lower half impossibly narrow, like a vampire coming up from his coffin; there’s the fishbelly-white slide of the contact lenses off of his eyes.  You could make a good case for it being the best “shocking reveal” in the movies, period. 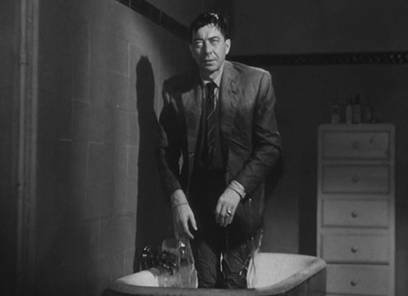 But it’s also the revelation that makes the rest of the film just a little disappointing.  When The Next Picture Show discussed this (well-paired with Thoroughbreds), Genevieve commented on it: the relationship between Nicole and Christina is more interesting at its start than at its end.  For a while, Diabolique is doing something rare and strange in setting up a wife-and-mistress murder team and in detailing this complicated relationship where Nicole is alternately protective of Christina and contemptuous of her (there’s an excellent scene where Christina talks about making mistakes grading her papers because of how anxious she is, and Nicole just matter-of-factly lobs an eraser at her: if you’re fucking up, fix it, don’t complain about it).  Early on in the film, a teacher acknowledges how bizarre it is to see the legal wife consoling the mistress, and there’s the idea that we’re getting something specific about Christina and Nicole, something possible enough to be believed but implausible enough to be dramatic.

But it’s a front.  The complex strangeness is just the third lie in the two words.  All along, things were simpler: the other woman couldn’t be trusted.  The femme fatale is only out for her own profit.

I love stories that invest wholeheartedly in their tropes—Body Heat goes all in on it, among many, many others—and stories that subvert those tropes.  But there’s a peculiar disappointment to being given something that looks like its own story, told according to its own rules, and then finding out that all along it was following the same old familiar playbook.  The twist was that things were exactly what they appeared to be.

But despite my misgivings about that, Diabolique still works.  Partly that’s because its playbook is sometimes charming on its own—I love Michel as the quintessential French bad guy, a villain less for his infidelity and violence and more for the fact that he serves bad fish, gets stingy with the wine, and will cheat his employees out of their vacation time.  But mostly because the reveal of Michel standing up in the bathtub is so great and so iconic that it briefly recaptures the feel of the film outside of that revelation: here is something totally itself.  Here is something completely committed.  Here’s the truth.