Browse: Home / Year of the Month: The Cat in the Hat Comes Back!

The Cat in the Hat Comes Back might be the perfect book to review today. He is, after all, the ultimate prankster, making fools out of everyone, April and every other month. Even though he’s been softened into a bland teacher, a kind of fuzzy Mr. Rogers, in latter-day adaptations like The Cat in the Hat Knows a Lot About That or Seussical the Musical (and even by Dr. Seuss himself in I Can Read with My Eyes Shut), the Cat in the Hat is probably the best modern-day incarnation of the Trickster God: a kind of kid-friendly version of Anansi or Coyote, bringing chaos to the mortal realm.

The Cat in the Hat ended him with him restoring the ordered world he’d spent a few pages dismantling. But since his charges hadn’t learned their lesson the first time, he has to return to see if he can make it stick. The Cat in the Hat didn’t wrap up with a neat, Aesop-like moral, but if it has one, it’s the Cat’s words “It’s fun to have fun, but you’ve got to know how.” And if so, the two uptight little Dick-and-Jane-alikes clearly haven’t learned it, because this is how The Cat in the Hat Comes Back opens:

They might as well have summoned the Cat. At a time when children’s books encouraged their readers to be seen and not heard, miniature adults in their pressed shirts and frilly dresses, Dr. Seuss created the Cat to, in the words of The Dark Knight, “introduce a little anarchy.” A big part of the book’s comedy comes from the contrast between that aspect of the character and his refined, hyperformal appearance: he prances into The Cat in the Hat Comes Back demurely looking down, carefully lifting his tail to keep it out of the snow. He’s wearing a bow tie and white gloves, and even his trademark floppy hat is a whimsical corruption of the top hats that the previous generation’s high society demanded. 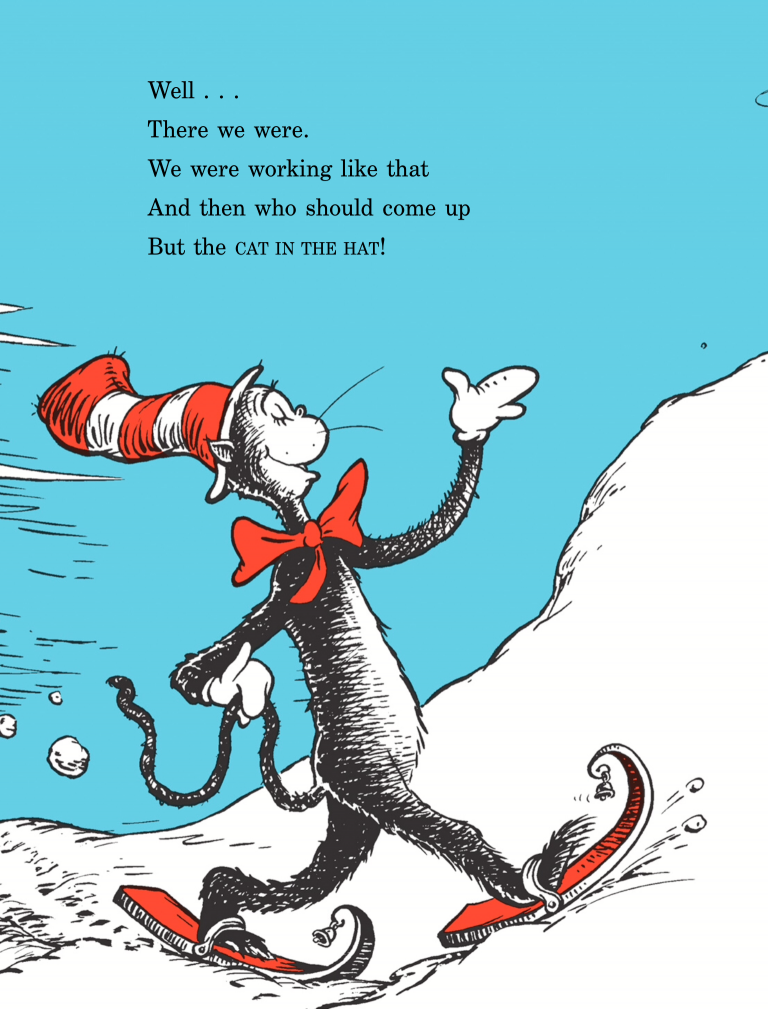 Seuss gets a lot of comedy out of the contrast between the Cat’s elegant unflappability and the chaos as he causes, most memorably when he pulls up the rug, eyes closed, sending the narrator helplessly flailing into the air. 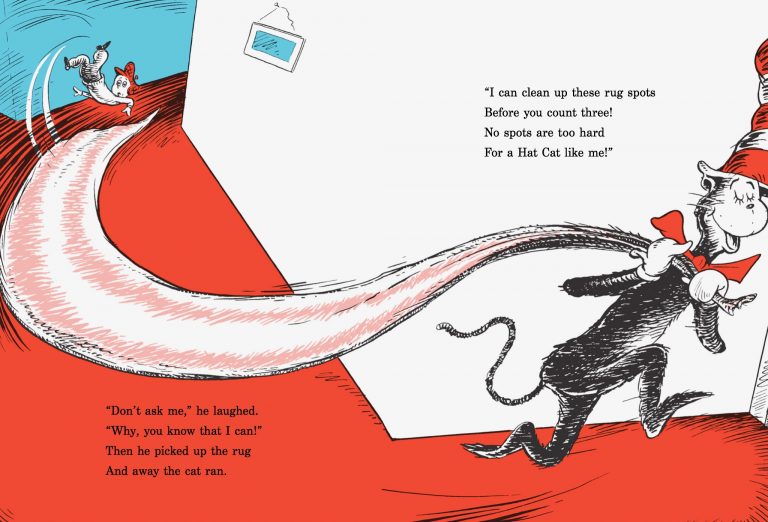 Dr. Seuss knew his readers, even the very young ones, would know they were in for more of the same as soon as they pick up this book. That could get old quick, but it actually becomes a source for comic tension, because the characters know it too. Seuss uses all caps to convey the kids’ shock and horror when they realize what’s about to happen: “Who should come up/But the CAT IN THE HAT!” The Cat, of course, denies he’s up to anything and skis right through the front door before they can raise any more objections. Instead of passively watching like he did in the original, the narrator rushes after him to put a cap on the chaos. He’s too late. The Cat has somehow already turned the whole bathroom into a swamp. Dr. Seuss obviously relished drawing the big, arcing water droplets splashing out of the tub, and there’s the wonderful, unspoken absurdity of the Cat shielding his cake with an umbrella. (The narrator’s more concerned with mundane details: “The hot water was on/And the cold water, too.”) 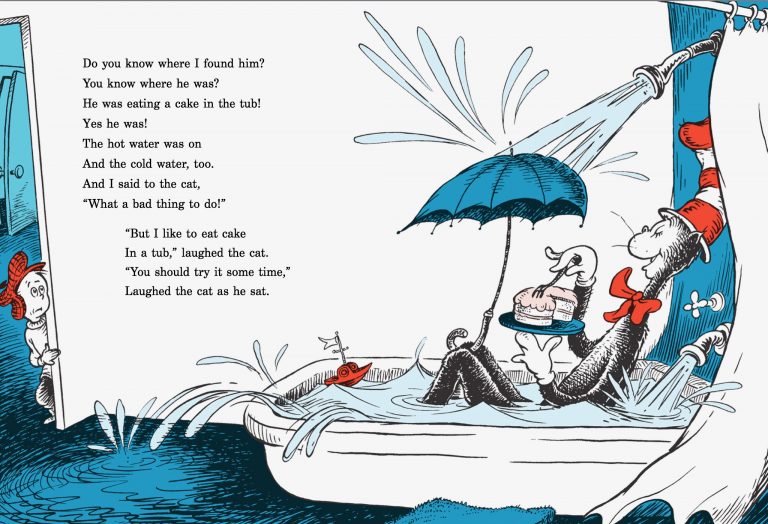 Even though most of the humor is pitched broadly enough for his young readers, Seuss enjoys subtle humor like this: the description of how the kids ended up shoveling the walk is a brilliant bit of talking-around worthy of A.A. Milne: 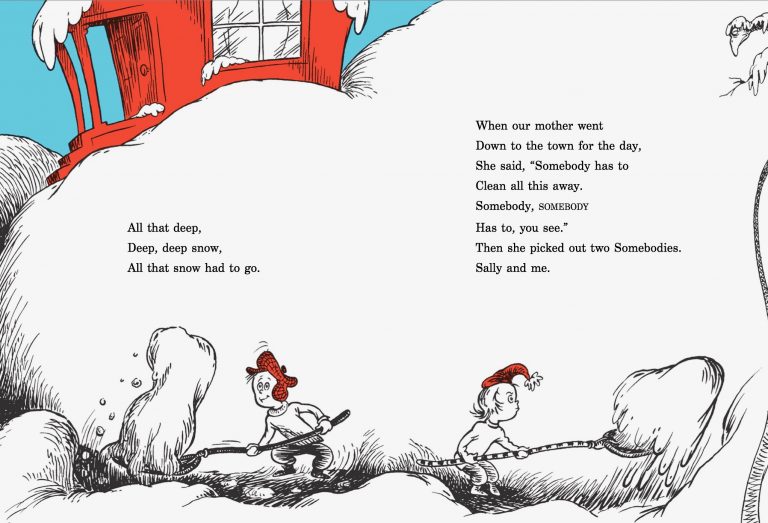 On the same page, he tucks another subtle detail into the corner, a hunched-over little bird covered in snow with an expression of hilarious discomfort – the kind of visual richness you need for a book that’s going to be read over, and over, and over again.

After the narrator catches the Cat in the tub, he angrily demands he get out, and we’re introduced to the book’s main conflict: the teleporting stain ominously referred to as “THE RING.” (Seven days…) Dr. Seuss makes excellent use of his limited color palette here, the hot pink stain contrasting with its plain white surroundings. 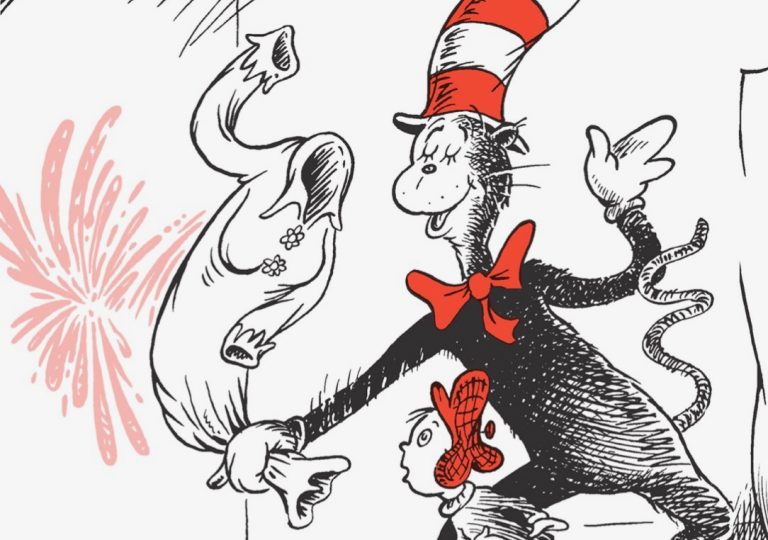 What we get from there is a masterpiece of comic escalation, as the kids’ reactions to the chaos around them goes from shock 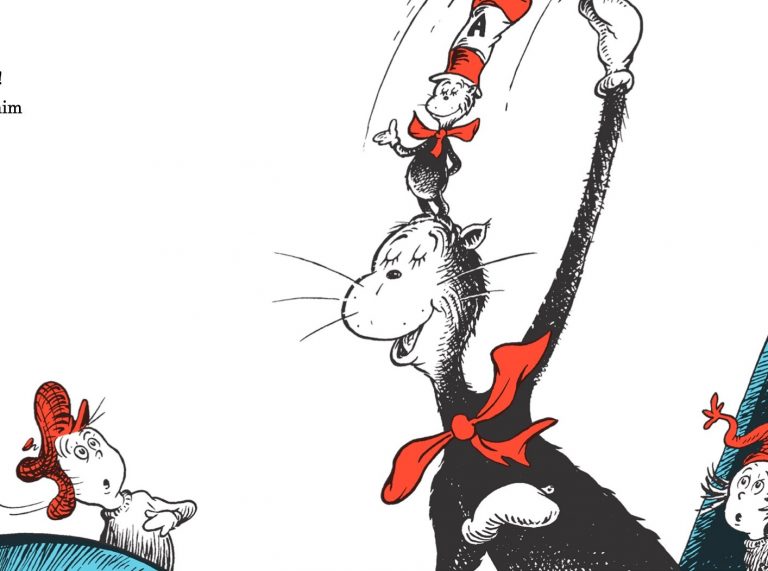 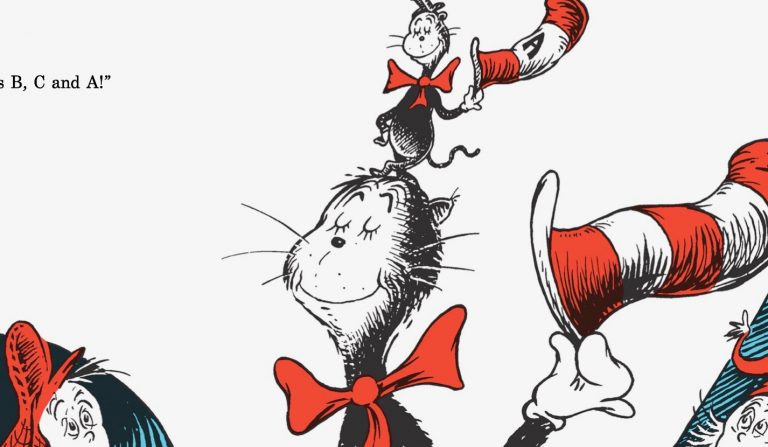 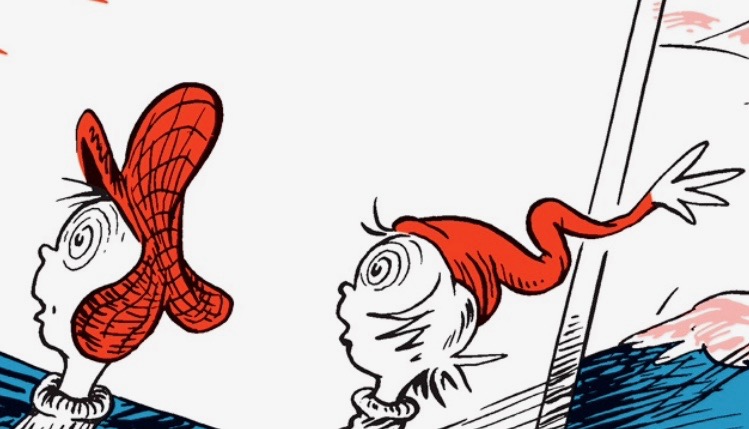 Dr. Seuss has written other books that offered a better showcase for his legendary imagination, but none are as flat-out funny as this one. It was my favorite once I got old enough to develop my own sense of humor, and even as an adult, there were moments here that got me perilously close to laughing out loud. Maybe the book’s constant how-can-this-get-any-worse? progression explains a story my parents told me from when I was very young. I would always ask the babysitter to read this book and then lose interest before we finished and run off. But she had to know how it ended. So one day she sat down and read through it as fast as she could so she could finish it before I got away!

Like John Stanley, Dr. Seuss understood the surreal and unyielding logic of the child’s mind, as the Cat calmly and reasonably insists that the best way to take the ring out of the tub is with a dress…and “the thing that takes spots off a dress is a wall”… and “to take spots off a wall,/All I need is two shoes”…and to take spots off the shoes all he needs is the rug…and to take spots off the rug all he needs is “the right kind of bed”…only to conclude, like a kid who’s had holes poked in the story of how the cookies went missing from the cookie jar, “This is NOT the right kind of bed.”

Now the Cat needs help, and this leads to the book’s most memorable image, as he keeps pulling more cats out from under his hat, who pull more cats out from under their hats, on and on into infinity, until by the time get to Little Cat Z, they’re pulling infinitesimal cats out of microscopic hats. It’s an image memorable enough to be homaged in the Seussian Gothic world of The Nightmare Before Christmas, by way of The Cabinet of Dr. Caligari. 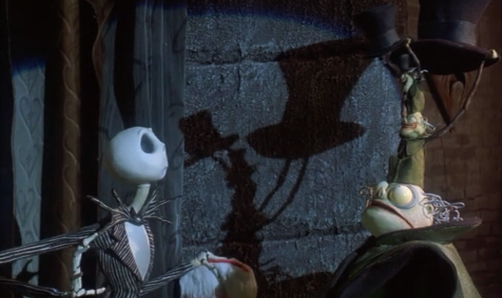 And as an added bonus, it’s a good way to teach the young readers their ABCs. It also leads to one of the book’s most striking stylistic flourishes, as abstract blue brushstrokes flow out of Little Cat B’s hat when he pulls it off to reveal Little Cat C. 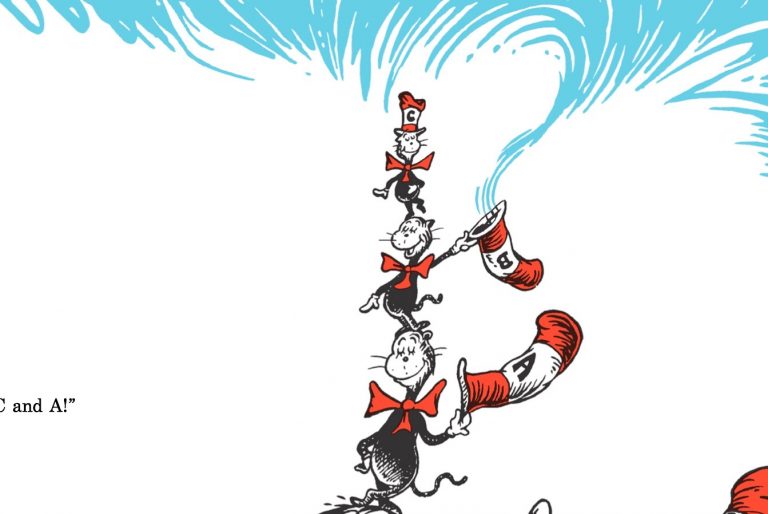 It’s more of that brilliant comic escalation, and maybe that’s where the whole idea came from. If the Cat could turn everything upside-down with the help of Thing Two and Thing One, how much more damage could he do with twenty-six little helpers? 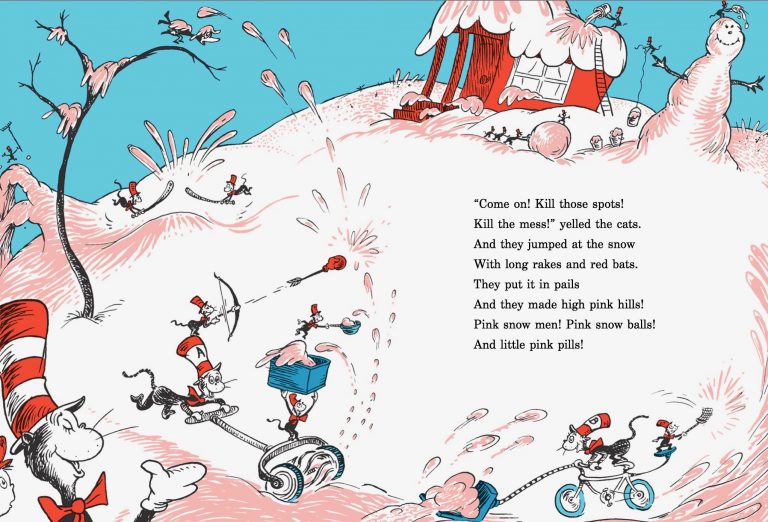 The little cats only seem to make the mess worse, turning the yard into a battleground of slapstick anarchy worthy of the Marx Brothers or the cast of Looney Tunes. Maybe it’s the influence of generations of sanitized children’s entertainment, but the hyperviolence of the Cat’s insistence “They will kill all those spots!” is especially hilarious. But the most violent moment is almost abstract, when Little Cat Z unleashes the “VOOM!” he has hidden under his hat. Other than the word itself, written in harsh, slashing angles, the whole page is filled with sweeping brushstrokes, clouds, and spirals, one of them curling around the letter “V.” 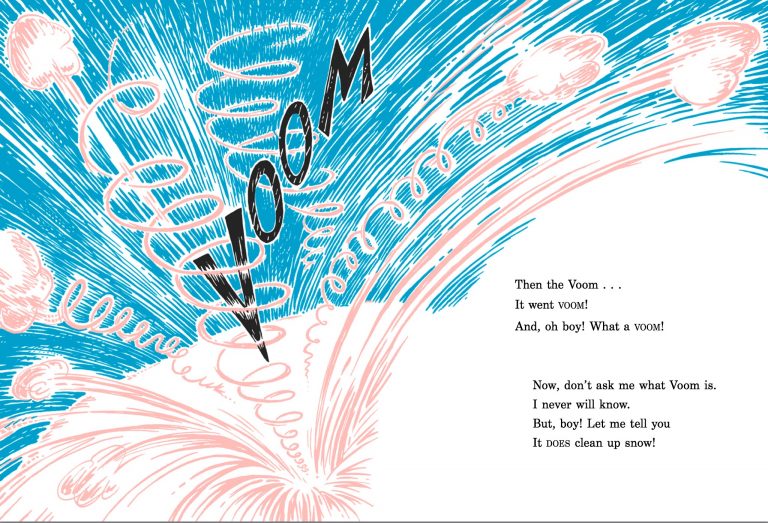 Like the original Cat in the Hat, the book ends with everything back in its place, even if the kid are a little worse for wear. And then the Cat walks off the page, back to wherever unknown place he came from – sure to return and demolish the button-up world of some other button-up children another day.