Betty Boop may be one of the few characters  to have passed almost entirely from fictional character to pure icon. Before researching this essay, I’d seen her on about a thousand cheap sets of sports clothes, pyjamas, and underwear, but the only place I’d seen her ‘perform’ was in the film Who Framed Roger Rabbit, making a joke out of her own irrelevance. Wikipedia reliably informs me that her cinematic fall was due to a) the Production Code necessitating the studio downplay her sexuality, thus removing what industry insiders called ‘the fucking point’ of the character, and b) the decline in popularity of jazz and flapper culture that she riffed on, with Fleischer Studios never quite able to adapt her to the changing times, and that her revival as a logo was in the Eighties; obviously, people really respond to the way she looks, and I suspect a lot of it comes down to the fact that she’s simultaneously sexy and ugly. The way Wikipedia describes her design sounds skeevy to me, drawing attention to the way her oversized head and eyes make her look more childlike, as if she’s sexy specifically because she looks like a kid; greater minds than mine have talked about the way women’s sexuality can be infantilised, with predators working to justify fetishising youth in order to get away with preying on girls. In this case, though, we’re talking about a character that appeals to women – I’ve seen her on men’s boxers, but more often seen her on women’s clothing. I wonder if it’s because her goofy, misshapen design pushes her into a genuine caricature of a sexy woman.

Caricatures of attractive women enjoy a long history but not a healthy one; I doubt it would be controversial to say here that there are men who have lost all conception of what women actually look like because they’ve overindulged in caricatures of sexiness (when you’ve reached the point where the concept of a woman’s thighs touching is gross and alien, you’ve lost your connection to reality) and that it’s harmed women. Even short of that, deliberately trying to caricature attractive women to satirise sexism can end up playing right into that; speaking of Roger Rabbit, whenever I bring up that some asexual people claim Jessica Rabbit as an asexual icon – desirable but never expressing desire – someone often shoots back an argument that’s some variation of “yeah, but you still want to whack off to her, right?” It doesn’t totally deflate the point – even without the asexuality interpretation, the whole point of Jessica is that she’s an attractive woman with an inner life that’s not always respected – but it’s hard to ignore the real world effects of her existence.

Betty is different. Her features are distorted in such a way that she’s recognisable as a sexual object while not being sexually desirable. Her body is proportioned all fairly correctly, but her head and face are ludicrous and throw the whole thing out of joint, and the way her body moves like wet noodles makes it impossible to take her seriously as an attractive human being. I believe that inherent contradiction is what draws people to her; hell, it’s an emotion I recognise in myself, being both a goofy-looking dude with bits that are too big, too small, or the wrong shape AND secure in the knowledge that there are people attracted to me, so I can certainly see that women, considering all the cultural forces weighing down on them, might be drawn to her.

The best original songs of 2007, according to the Academy→ 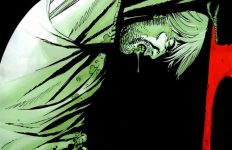