Honestly you could get an entire reaction folder out of just shots of Charlie. He’s such a mood so much of the time. There’s also one of those great animated opening credit sequences, and Charlie’s facial expressions in those are delightful as well. They used four different cougars for this—and apparently a stuffed one on a Styrofoam log at one point—but wildlife photography, Disney or otherwise, has long been a great source of animals expressing moods you can feel yourself. Besides, Disney excels at finding the best shots to put into their movies wherein an animal is the main character.

Charlie is orphaned. He’s left on his own in the Cascade Mountains (North Central Idaho), which is normally a death sentence for a young cub. However, goings-on pair him up with Jess Bradley (Ron Brown), who works for a logging company. Jess takes in the little cub, and there are more goings-on, including a rivalry with a dog named Chainsaw. (Alas, there is no corresponding dog named Dave.) Charlie causes problems for the loggers as he gets older, and Jess gets a girlfriend (Linda Wallace, who gets neither lines nor a character name), and, what with one thing and another, everyone realizes that Charlie is a wild animal and cannot be kept as a pet.

This is the kind of documentary that gets poked fun at a lot. In my head, it’s Charlie, the Way-Out Cougar, which is absolutely not what it is called, and that’s me mixing it up with Sammy, the Way-Out Seal, which actually is what that’s called. Still, you get wholesome Rex Allen narration, and Charlie gets to be adorable and also kind of terrifying, and there are assorted other cute animals, and it’s just generally wholesome Disney fun. With the reminder that wild animals are, you know, wild, and you can’t keep them as pets and they have to live free and go find mates. There’s always a mate in the end.

But honestly, it’s true that cougars do not make great pets. Charlie deserves to be free, and if he were kept around the camp, he’d grow bigger and wilder and eventually have to be put down or locked up because he was a danger to himself and others. That isn’t a fair life for Charlie, and pretty much everyone genuinely seems to like him and want what’s best for him. In the long term, it’s hard to be sure with this story if Charlie would survive, because he’s used to humans and that ends poorly, but at least Jess takes him to a wildlife sanctuary, where cougars can roam free and not fear hunters, not that Charlie necessarily actually would. Which is the problem, after all.

It’s not as annoying as it could be that Jess’s girlfriend never gets a name. Hardly anyone in this gets a name. Oh, Charlie, of course. And Jess. And there’s a guy nicknamed “Potlatch” because, sure, why not. (“Potlatch” is a local Native term, and I’m sure his nickname is thoroughly culturally sensitive. He’s played by Brian Russell, born in New Jersey.) And Chainsaw the dog. And that’s literally it. This kind of film—it’s barely feature length and aired in theatres with The Jungle Book—was more interested in its animals’ lives than its humans’.

Still, I’d like to know what those loggers were thinking when they decided to blow up a log jam with dynamite before making sure that the river was completely clear for far enough so that no one would be endangered by it. This was, apparently, the last log river drive in the United States, so that’s interesting, but it really does emphasize that this was not the most efficient way to get lumber to market. The other nice thing about that wildlife sanctuary is that one hopes that Weyerhauser—who worked in cooperation with Disney—wouldn’t be able to log there. It’s a better ending for Charlie than the Olympic Game Farm in Sequim, Washington, formerly Disney’s Animal Ranch, which is where the acting cougars lived.

I paid real American dollars to rent this movie, albeit not many of them; reimburse me by supporting my Patreon or Ko-fi! 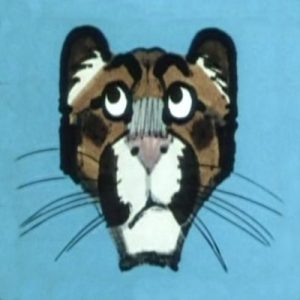