On the whole, when it comes to Donald Duck, Aquatic Sociopath, I’d really rather watch him against the forces of nature. So much better than remembering that he’s responsible, in much of Disney chronology, for the lives and well-being of three children. It takes a special cartoon indeed to cross over and make you concerned about his parenting skills while he’s up against forces of nature, but watching him spank a lion cub will do it.

Louie the Mountain Lion is fishing. Using his tail as a rod. Meanwhile, his son—who will only ever appear in this short—sees Donald getting out of his boat with a whole mess of fish. One falls, and he proudly takes it back to his father. Who has managed to catch a tiny fish, which he throws away to go in pursuit of Donald’s huge pile of fish. Though apparently Donald is going to cook at eat about twenty large fish all by himself.

Does anyone handle guns less safely than Donald? Okay, the most harm anyone gets from it is a backside full of buckshot, but still. He answers the door by pointing a loaded shotgun. We know it’s going to be the lion because this cartoon has three characters, but what’s Donald’s excuse? It could’ve been Mickey or Daisy or his nephews. It could’ve been J. Audubon Woodlore. It could’ve been a lot of people/animals. And his response was to aim a loaded gun. Really, almost the entire cartoon is a demonstration of how not to handle a firearm.

It’s interesting that Donald spanks the lion cub but Louie does not. He puts the kid in time out, but he doesn’t spank him. In fact, the lion shows better parenting than Donald is ever seen to; he’s trying to teach his kid how to safely acquire food without getting shot and getting his head put on the wall (with a stuffed fish in his mouth, which seems just extra cruel). He does put his kid into danger at one point, sending him in through the wood box (my mom actually has a similar door in her house, to bring in wood without going outside) to get the fish, but it’s not the lion’s fault the kid is caught. And his next idea is relatively safe, except the part where Donald seems to have a magic shotgun in this short.

Some of the animation is weird—fish change size wildly from shot to shot, for one thing. And we also get a fully naked Donald for some reason. And there is the magic shotgun; it fires once on its own, when the lion hauls it up through a ventilation pipe. The buckshot follows the lions along a trail and into their cave, and if they turn, it turns. It’s really unfortunate. Also, that’s one moment of bad parenting—Louie is perfectly willing to let his kid get shot if it’ll stop him from getting shot for a third time. But since they don’t come to any lasting harm and it seems more of an inconvenience than anything, it’s still better than the lasting psychological damage Donald has done to his nephews? 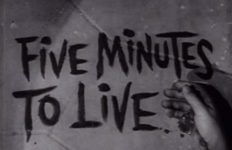 The Year in Gimmicks: Vomas on William Castle’s 1961→