I paid actual money for this. I had to rent it, because it isn’t available streaming anywhere. (You can reimburse me by supporting my Patreon or Ko-fi, but still.) The much-vaunted End of the Vault with Disney+ sure didn’t open the Vault door wide enough to let this one out. Now, I grant you that it is awfully obscure. It’s Fess Parker’s third best-known film to be released in 1956. What’s more, it’s racist. It’s not just that one of the only credited Native American characters is played by, sigh, Iron Eyes Cody, though goodness knows that doesn’t help. Still, this is one of literally dozens of movies I’ve had to track down in ways not involving Disney+.

The year is 1846. A wagon train, theoretically led by James Stephen (George Reeves), is crossing the plains. The emotional leader of the group is John “Doc” Grayson (Parker), who hopes to someday become a doctor. However, the minute the opening credits finish, we launch into a raid by the Pawnee, who steal a string of horses. They make it to the fort of a French trader named Bissonette (Sebastian Cabot), who lives in uneasy peace with the Sioux, who don’t get along with the Pawnee.

Probably the creepiest bit is when Wolf’s Brother (John War Eagle) is admiring pretty little Myra (Karen Pendleton), calling her a “daughter of the rising sun” and “good medicine,” and we are clearly supposed to be seeing her as a potential captive for a fully-grown Sioux man admiring the blonde-ringletted white girl. The implications there are definitely intended, as James Stephen takes it amiss. We’re supposed to be worried about what would happen to that little girl if the big, scary chief gets his hands on her.

In fact, he wants to trade for the girl to be wife to his son. Many Stars (Cody) assures him that the girl will bring them good luck. Her older sister, Laura (Kathleen Crowley), understandably does not want to give her sister up—the parents are dead. We also make sure we know the Sioux are sexist, as Wolf’s Brother does not wish to negotiate with Laura. As though Laura had any kind of rights in an American court. Fortunately for everyone, White Man’s Medicine in the form of someone who’s studied a few books and really wants to be a doctor saves the day.

I mean, it’s not a surprise that this particular movie isn’t on Disney+, I suppose. I was deeply afraid that last week’s offering would be pro-Confederacy, given it’s set during the Civil War, and was pleasantly surprised. Similarly, this movie could be a lot worse. As far as I can tell, the only person playing a Sioux in this movie who wasn’t of at least partial Native American ancestry was, sigh, Iron Eyes Cody. Not necessarily Sioux, though some of them were, but there could be so much more redface than there is. It’s a respectful portrayal of the Sioux for, you know, 1956, but that’s only a slightly higher bar than “a respectful portrayal of the Sioux for 1846.”

Still, this is not that long after 4.4% of the total expenditure of the Manchester Royal Hospital in a year was on leeches. Let’s leave aside how little medical training the character has entirely, which we shouldn’t, because it’s not a whole heck of a lot. Let’s consider that this is an era when the philosophy of European medicine boiled down to, “Whether it works or not, it’s better to look like we’re doing something.” Which killed quite a lot of people, including George Washington not all that long before the movie is set. Everyone’s damn lucky to get the results they do.

It’s not that I’m specifically upset that this movie isn’t available on Disney+. It is racist, after all, even if it manages to clear the extremely low bar of “not the most racist movie of 1956.” It’s that I’m getting tired of looking for things I want to watch that are both better and better-known than this and not finding them. Barely any of the classic Disney TV is available. The availability of live-action movies from before about 1990 is spotty at best. One of the animated features is missing. The Vault is very much not open yet. 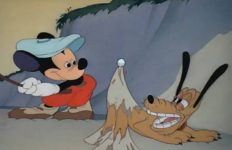