The real Ivan IV was “Terrible” in the sense that the Old Testament God was Terrible: the terror of thunder and lightning, of violence rained down upon unworthy subjects. He himself was ugly, deformed both by illness and by a manic paranoia that only increased as he aged. His most infamous contribution to Russian political history was the creation of a personal paramilitary force, the Oprichnina, a black-clad cavalry known for bringing literal fire against Ivan’s opponents. Not for nothing was the most controversial Russian artwork of the 19th century  (and a recent focus of violence itself) dedicated to one of Ivan’s moments of impulsive violence against his own family.

But Ivan was much more than that. He was also a savvy diplomat in regular correspondence with England’s Elizabeth I, man of faith who wrote letters under a humble pseudonym (“the Holy Fool Parfeny”), and beloved in folk culture as the enemy of the boyars, the squabbling aristocratic class of pre-imperial Russia. From some angles he cuts a tragic figure as a sensitive, intelligent man driven to rage by conspiratorial murders of his loved ones. And so much of what we think we know about Ivan is in doubt: Are his letters, correspondences with people like his lifelong frenemy Prince Kurbsky, real or forgeries? Were the images of the crooked Tsar of All Russia that have come down to us drawn by political enemies and thus unreliable? Do the folk stories about Ivan, friend of The People, derive from nothing more than popular wishful thinking?

Given some of the most widely-known facts about Ivan’s life — the cruelty, the paranoia, the religiosity — it may seem strange that the Soviet ideologues decided to rehabilitate him in the late 1930s-early 40s. But there were certain aspects of Ivan’s life that were ripe for revision, especially given the ascendency and political programmes of Stalin. Ivan IV was the first to declare himself “Tsar of All Russia”, that is, of the various princedoms that would eventually be absorbed into what we now consider the modern Russian state. He conquered neighbors, expanded his empire into previously unexplored (by Russians) Siberia, and transformed the provincial Muscovy into a respected (by Europe) power. And his real animosity toward the aristocratic class was useful for communist narrative. In 1942, party propagandist Aleksandr Shcherbakov penned the official memorandum extolling Ivan as the champion of the people, defending his “harsh measures” as necessary against boyar entrenchment. Stalin himself reworded a draft memorandum by Zhdanov to emphasize Ivan’s service to the state, with himself only as figurehead to a larger cause of national greatness.* 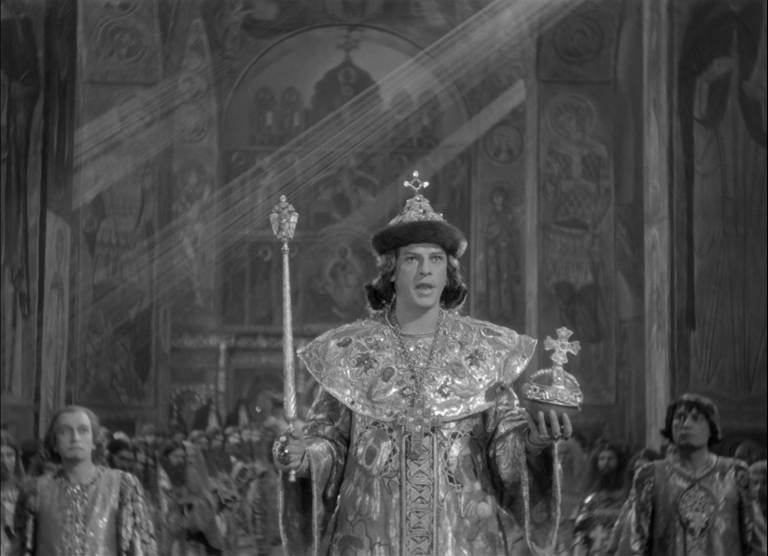 Part one of Sergei Eisenstein’s planned three-part series Ivan the Terrible was released the same year as that Zhdanov memorandum. It covers the period from Ivan IV’s coronation to just after the death of his first wife, which Ivan believed (and the film presents) as a deliberate poisoning by his political enemies. It stars the great Nikolai Cherkasov, who plays Ivan less as a human being than as a divinely touched figure looking constantly to the horizon. It is, especially in the opening acts, almost dramatically inert. The acting is stiff and unnatural. It assumes its audience already knows most of the story. Its attempts to make Ivan into an acceptable figure for Stalinist ideology are laughable. It’s also a great film, and a lot of that has to do with talent involved.

Since his return to the Soviet Union after his visit to the States and his failed project in Mexico, Eisenstein had largely abandoned (or been forced to abandon) the sometimes-abstract experimentation of his more modernist early films. There’s nothing quite like the wild montages of Strike (his best movie!) or Potemkin after his Mexican sojourn, and even his choice of material after the mid-1930s hews more closely to traditional narrative. Instead, he and his collaborators began looking to push the boundaries of film expression and the symbolic capabilities of cinema in more subtle ways, as when he worked with Prokofiev on Alexander Nevsky to design a film score that echoed the geometry of the images themselves. Prokofiev is back on Ivan, though with a more conventional score than Nevsky (or even the non-Eisenstein Lieutenant Kizhe). The production design by Iosif Shpinel and the costumes by Leonid Naumov and Nadezhda Buzina take great advantage of both the pomp of the Muscovite court and of Ivan’s expressionistic decline into grief and rage. The sharp line from the crown of Ivan’s head to the point of his goatee is one of the most memorable images in all of Soviet cinema. 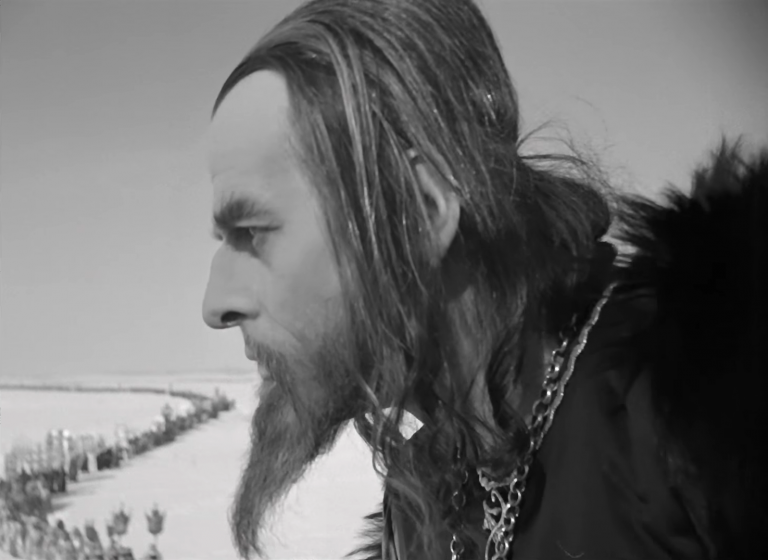 In the earlier Nevsky, Eisenstein had compensated for the utter blandness of its hero (also Cherkasov) with spectacle, like the stunning Battle on the Ice. Here, the spectacle is mostly indoors (the siege of Kazan is only a pale shadow of Nevsky‘s battles), but no less impressive for the limited space, from the absurd luxury of the wedding feast to the twisted corridors of the palace, the film increasingly dark and claustrophobic until Ivan himself seems to blend into its expressionistic design. When, in the final sequence, Ivan exits his candlelit cloister into the blinding light of sun and snow and casts his gaze over the trail of extras stretching to the horizon, the bright expanse represents an overwhelming promise of rebirth, albeit with a sinister subtext.

On the more traditional end, the film hews closer to the codes of popular silent filmmaking than Eisenstein ever did during the actual silent era: he has his actors emoting in silent, static and stereotypical ways, from the foppish Kurbsky (Mikhail Nazvanov) to the virginal Anastasia (Liudmilla Tselikovskaya), from the masculine crone Efronisia (Serafima Birman) to the ruddy muzhik Maliuta (Mikhail Zharov). Each could very well be a stock character from a 1920s melodrama, and each looks positively old-fashioned compared to what else was happening in cinema in the 1940s. The protagonist is a harder nut to crack: Eisenstein and Cherkasov create an almost Shakespearean Ivan, a man prone to monologue rather than connection with his fellow humans, a creature of exaggerated gestures and inhuman expressions. Even as a fresh-faced youth he is isolated and hard to like, much less when he is effectively beaten down by circumstance into physical deformity.

By the end of the movie, Eisenstein is already pushing into troublesome territory.** It’s one thing to create a new myth of Ivan in a Party Memorandum, but any film that treats the facts of Ivan’s life eventually has to deal with his ongoing mental and physical decline. We might rationalize Ivan’s steady physical deterioration not as a reflection of moral deterioration but as a consequence of the enormous burden and personal suffering he takes upon himself as a servant of the People. We might say that. We might also say that Eisenstein regardless transforms his protagonist into an increasingly hunched, angular, almost crow-shaped monster. The final Ivan, cruel and crippled and black-bedecked, cuts a grotesque figure against the whiteness of snow and monastery walls. At this moment of greatest doubt, he is resurrected by the unanimous voice of The People who arise to support him. In the final sequence, he is become a tool of divine righteousness, albeit one with sunken cheeks and hollow, baggy eyes. When he accepts his role at the end of the film, it comes with a promise: he will be a terror of thunder and lightning.

Good news! If you haven’t seen this movie yet but want to, Mosfilm has kindly uploaded a very crisp transfer of Ivan the Terrible, both parts, for free on Youtube. The entire Mosfilm catalogue is worth looking through, with lots of classic films available.

** Sure enough, ’twas part two where Eisenstein really ran into trouble, and the censors found it impossible to overlook the dramatization of Ivan’s battles with boyars as anything but a critique, implicit or explicit, of Stalinist terror: seems the summary executions hit a little too close to home.

This wasn’t the only great dramatization of Ivan the Terrible in Soviet cinema: for a great change of pace, everyone should seek out Leonid Gaidai’s classic 1973 film Ivan Vasil’evich Changes Professions, an adaptation of Mikhail Bulgakov’s long-banned play about a scientist whose time-travel machine accidentally causes his bumbling building superintendent to switch places with the 16th century tyrant. Various hijinks ensue.