Just before scorching the stale tropes of music biopics with Walk Hard: The Dewey Cox Story, Jake Kasdan aired his personal grudges with the network television system. 2007’s Walk Hard is an over-the-top comedy, with gags and jokey dialog delivered by outsized characters. The characters of 2006’s The TV Set have realistic goals and mannerisms, yet the movie shows how groupthink and advertising-based economics put them in situations indistinguishable from parody. Naturalistic scenes lead to lines that wouldn’t seem out of place in the world of Dewey Cox: “In a fight between sex and sex, the sexier show will win.”

Kasdan confronts his demons here, having been part of the team that created the singular and beloved Freaks and Geeks then watched it smother under the hand of NBC. For all its poison, The TV Set is a subdued film, eschewing even the network TV flourishes of the show-within-the-movie. The movie stares coldly at the process and the people who prolong it. Every character either bitches confidentially to allies or speaks in tight, polite equivocations to adversaries. The movie’s simmering anger lashes out only to hurt the characters who risk something personal.

The primary target of those lashings is Mike (David Duchovny) whose sitcom pilot script The Wexler Chronicles has been chosen for development. It’s a tricky dark comedy scenario about a man bouncing back after his brother’s suicide. It’s also a semi-autobiographical script, inspired by the suicide of Mike’s own brother. We join Mike as he deals with two pains in his backside, a spasming spine and network pressure to water down his idea to better fit the data gathered from test audiences and advertisers. The Panda Network – lately making hay with their surprise reality hit Slut Wars – is a sea of mostly anonymous men who crowd rooms and wander sets in undefined roles. Two faces get singled out: Richard McCallister (Ioan Gruffudd), a British import whose scruples and marriage crumble in this new land, and the network’s president known simply as Lenny and played by Sigourney Weaver, the film’s MVP (the V stands for Venomous).

Weaver’s Lenny is to The TV Set as the shark is to Jaws, starting at the smiles. Even when not in the room, the fear of her next strike drives conversations and decisions. Her unwavering focus on her job and her proven success with the bottom line – Slut Wars pulled a 19-share! – make her invulnerable in a way that Mike cannot be. He has a personal connection to the script and a pregnant wife to support. Lenny advises a distraught Richard that “Spouses are not necessarily a fixture of the schedule.” She relates a harrowing near-death experience and how it inspired her to live a better life – by winning the Thursday night ratings battle.

The performance injects the jokes with tension, as Lenny’s cheerful double-speak pries at Mike’s grasp on the project. She needs his buy-in to make changes, but his power is an illusion – displease her and the project goes nowhere. She may not want to go around Mike, but she’ll patiently tunnel through his objections. She points out that suicide is a depressing topic, a view shared by “82 percent” of surveyed viewers. He counters that it’s the personal crux for him and central to his vision of the show. Lenny understands but borrows from a classic Wes Anderson line to suggest “What if it weren’t?”

Kasdan understands how the changes to Mike’s script don’t simply make it dumber, but more impersonal. The network dumps Mike’s choice for the lead actor, played by Simon Helberg whose full beard explicitly and Semitic features implicitly make him both a double for Duchovny and a hard “no” for the suits. They favor the overacting Zach played by a hilarious and versatile Fran Kranz who, like Helberg, had network success in his near future but here channels the frustrations of the auditioning world. Zach’s penchant for slipping into a random accent and improvising (his big idea is to tag his lines with a painfully white-guy “holmmmes!”) moves the show’s seriocomic needle further to the right. Mike’s convinced to roll over and accept his casting with the promise that he’ll get to keep his suicide plot, but of course this is not a promise, just a tactic to delay confrontation over that change.

The battle over whether the brother will die waits until a pivotal day of filming. During a rapidly dwindling shooting schedule with an inconsistent Zach, a director more concerned with his sweeping crane moves than the dialog, and more back pain, Mike has an aside with Lenny where she delivers the dagger prick that will bleed out over the next couple weeks: “Let’s shoot it both ways.” The brilliance of Kasdan’s handling of this innocuous-seeming suggestion is in every character’s knowledge that it isn’t as fair as it sounds. The default course is to film the script as written and shooting Lenny’s version at all only serves to keep that option alive. All creative discussions in The TV Set play like gaslighting competitions, and to say no would make Mike the first person in the huddle to fully engage in a confrontation, and with the person who ultimately decides if the project lives or dies, no less. A singular vision can’t be shot both ways, and only one person sees this as a problem.

Here’s where the particulars of The TV Set seem dated by the streaming era – surely somebody of Mike’s status could shop his vision to Apple+ or Hulu and nestle it away from the demands of advertisers with a platform that would be happy to host a niche hook and darker material. If anything, with all the grumbling about the trope of Trauma Plots, we might be a little fatigued of Wexler Chronicles. But that option wouldn’t be available for another decade, and the movie suggests that classics like Seinfeld and The Sopranos, both namechecked, were miracles. The TV Set’s enduring lesson is that caring is a punishable sin in the inner circles of motion pictures. “If I don’t worry about the content in my show, then I’m part of the problem!” Mike moans. “I’m making the world more mediocre!” But the alternative to showing the world a compromised vision is to show nothing at all. Integrity is a secret, lonely virtue – not to mention difficult on the finances of a new father.

After a roomful of test rubes, a mall survey, and a desperate move to play against the competition’s schedule, Mike is the creator and head writer of the newly commissioned The Wexler Chronicles. Except now it’s titled Call Me Crazy and it’s a broad comedy. A new sizzle reel of the show keeps Zach’s hammy takes and adds leering crash zooms on the ass of his co-star (Lindsay Sloan). The brother character is pointedly not dead but instead punctuates his dramatic monolog with a loud fart. Everything is set to the most overplayed songs of The Cranberries and Hootie and the Blowfish. “Just imagine what the next twenty episodes will bring!” Richard crows while Mike stares painfully into the middle distance.

It’s a lesson about creativity easily hidden by ambition: the reward for eating shit is the opportunity to eat more shit. There’s a tiny but fascinating moment during the scene where the pilot is being filmed, where a gruff veteran cinematographer (M.C. Gainey) saunters past a distraught Mike and assures him “I know this seems important now, but it’s not. It’s just a blip.” Mike wanted it to be more than a blip and follows it into purgatory. The wise DP was right, neither version of the show will mean as much as anything Mike experienced before it came to be. By putting something of himself into it, Mike put himself at risk in a way Lenny never would. All these goofy shows, they’re all just blips, each of them insignificant, as Lenny would be happy to point out as she gobbles each of them one by one. 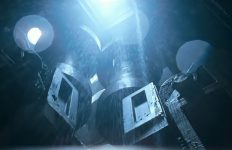 And These Visions Of A Spaceship Are All That Remain: Alien (Year Of The Month)→ 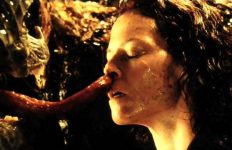 Year of the Month: Miller on Alien: Resurrection→ 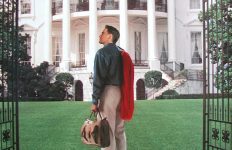