Madonna
When we last left Madonna, she was cinematically floundering in chicken shit, but scoring high with her album True Blue. After the success of Desperately Seeking Susan, Madonna’s goal was to return to what made her successful: a comedy about New York City. With that goal in mind , she found the screenplay Slammer about a girl named Nikki Finn who was wrongfully accused of homicide and needed to clear her name. Her thinking was that she had to clear her name several times over the course of her career. She could relate.

Given the thrashing of Shanghai Surprise, and its subsequent failure at the box office, the only way Madonna could convince Warner Bros to make the movie was if she also made the soundtrack. Because of that negotiation, Who’s That Girl? is the first Madonna movie to not be accompanied by a completely separate studio album and subsequent image change.

The only video released around the time of Who’s That Girl? was that of the titular song.

The Who’s That Girl? Tour in 1987 was Madonna’s first tour since The Virgin Tour in 1985, which happened just after the release of Desperately Seeking Susan. Yes, folks, between November 1984 and September 1987, Madonna had released 2.5 albums, 3 movies, and did 2 tours. Madonna was working hard as hell. Even though I’m going to be giving her some shit for this movie, it’s impossible to say that she wasn’t trying.

The Who’s That Girl? Tour was Madonna summing up her career. She combined new outfits with outfits from The Virgin Tour, and the main theme of the show was to make the characters from her videos come alive. The tour was meant to promote both the 1986 True Blue album and the 1987 Who’s That Girl soundtrack, on which she had 4 songs. In actuality, Madonna was promoting all of the Madonna images that had come previously. It was a culmination of everything she had done up until this point.

Julius
My first Madonna movie. Oh, sweet lord, this was one of the movies my parents refused to let me rent 100 times over. As a tyke, I would become fixated on certain movies regardless of their quality. And, mostly my parents indulged me, but sometimes, for their sanity, they just couldn’t.

Who’s That Girl? was a staple on the afore-mentioned Nick Rocks show, and I enjoyed the song. It’s poppy, upbeat, kind of dreamy, and the video had a mysterious nostalgic tone. Plus, there were kids in the video who were fascinated by her, so I should be too, right? And, cartoons! Oh, this was right up my alley.

We didn’t see this in theaters, I remember that much. So, I must have been like 7 or 8 when we finally rented the movie on VHS. Who’s That Girl? was age appropriate for me at the time, as it is tonally pitched at 7 or 8 year olds. Who’s That Girl? opens with an animated credits sequence with a dancing Madonna, has a child-like maniac as the lead, is pitched at a frenetic pace, and there’s even a tiger! Plus, there’s a music video I liked! My parents wouldn’t let me rent it after the second time. They plied me with the rental of Disorderlies a couple of times, a similarly pitched zany music/film crossover, and largely distracted me with other films. I’m sure anybody who’s a parent can relate to this trick.

Madonna as Nikki Finn
Though, this brings up the question, what the hell was anybody thinking when making this movie?

Who’s That Girl? is a PG-rated movie. It’s aimed at little kids. Yet, the animated opening sequence doles out a full adult movie’s worth of story. There was a photographer, or detective, who took some photos of a guy doing some bad deeds. He hid the evidence in a safety deposit box, and passed the key off to his party girl girlfriend, Betty Boop/Marilyn Monroe/Madonna. Then there’s a couple of guys who ended up killing the guy, and throwing him in the trunk of Madonna’s car. They then follow Madonna, who gets scared and speeds away, only to be caught by the police. The police find the dead body, and then Madonna gets thrown in the slammer. All told in less than 3 minutes. The next thing we know, we get the on screen title “Four Years Later”. (P.S. If you missed everything in the opening credits sequence, Madonna breathlessly rants this pre-plot later in the movie…but that monologue is less than a minute, so you better not have gone to the bathroom during it)

Now, mind you, in between the plot of this animated sequence, Madonna causes a major multi-car collision by jaywalking, dances with some random women, and is basically street harassed by every guy in New York. Though that’s not bad, as it almost seems that she wants the attention. Even the catcalling construction guys fall over backwards into the concrete as she passes by. This…is Madonna. For 8 year olds.

When we finally meet Nikki Finn, she is a cross between a devious woman and a mentally challenged 8-year-old. There are a lot of people to blame for this one. First, there’s the writer, Ken Finkleman, who wrote Grease 2, and also wrote and directed Airplane II: The Sequel. Or, possibly the other writer, Adam Smith, who wrote for SNL, and also had written the Barbra Streisand movie, The Main Event. For some reason, James Foley directed it, who had prevously directed Sean Penn in At Close Range, and would go on to direct Glengarry Glen Ross.

But, ultimately, Madonna had to perform the character. And, she makes acting choices like this…

Griffin Dunne, that ever-put-upon yuppie-out-of-water from After Hours, has to pick her up from prison. You see, he is marrying the daughter of the head to his law firm on Saturday. But, the father is also the guy in the photo in the safe deposit box. As part of Nikki’s parole, she has to go back to Pennsylvania for whatever reason, and he makes Griffin Dunne take her to the bus station. Oh, and Griffin Dunne is also delivering a rare live puma to a client.

There are many, many scenes depicting Nikki as an undeveloped woman-child peppered throughout Who’s That Girl? I’ve spent a week trying to figure out why this exists. Why did Madonna agree to this? Why did Madonna create this character like this? The only answer I can come up with is that Madonna is assassinating her boytoy street-smart NYC image from the first album and Desperately Seeking Susan with every ounce of her being.

It’s not just in this movie, though. This idea extends to real life. In the first pair of albums, Madonna sang with a dance-pop high pitched voice that was perfect with a bass song. For True Blue, she dropped her voice to sound more mature. Contrastingly, to play Nikki Finn in Who’s That Girl, Madonna brings her voice way way up to obnoxiously high and nasal levels. Even when she’s being chased by the cops, she’s still combining an obnoxiously high pitched voice with behaving like a mentally challenged 8 year old..

Or, when she barges in on Dunne’s fiancee who’s busy massaging the hunky security guard/delivery boy Buck at her bachelorette party because the key had been thrown into one of the presents. She screams presents, and begins opening up somebody else’s expensive presents in search of a key.

At one point, Griffin Dunne asks her to pose as his fiancee, who has been kidnapped, for a meeting with a co-op board to get an apartment. Madonna transforms from street Madonna to Vintage Classy Madonna, then proceeds to annihilate that image with all of her “acting.”

It’s as if Madonna is openly mocking herself and her fans. Is she calling all of her previous iterations immature and childish? Or, is she just extremely clueless about what she’s doing? Griffin Dunne falls in love with this woman-child, and they do end up getting together, but it seems more of a case of Stockholm Syndrome than actual love.

There is one scene that’s an exception to all of this rigmarole, and that’s when Dunne and Madonna end up in an apartment rainforest owned by the 1% client who bought the rare live puma. Madonna is introduced in the scene as the prototype for Madonna’s next iteration, Classically Classy Madonna.

This edition of Madonna is introduced with a slow pan, she gets in a few words, and then is glorified by being a variety of love. Later, her and Griffin Dunne kiss and it is heavily implied that they spend the night together.

Since Madonna is one of the greatest self-marketers of all time, and she pulled some serious strings to get this made, the question becomes, “What was she actually trying to do with this zany screwball movie?” This is the second movie where she is trying to capture her image of what screwball meant in the 1930s and 40s. We know from Vogue (which we’ll be getting to in a later entry) that she has a fascination with the old school Hollywood glamour. Here, she’s trying to force that sort of mentality into hardnosed 1980s reality.

Julius
I’m sorry Mom and Dad for trying to rent this so many times. Truly I am. All I can say was that I was under 10, and had no taste. You guys, this is rough and we’re still in September. I will see it through to the end.

Next
Bloodhounds of Broadway 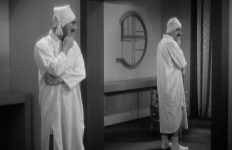