Starting three years ago, I set out to cover the complete filmic works of Mike Mills. I mostly succeeded but left some gaps, mostly with his commercials and music videos. Now, with nothing else for me to do, I will fill in as many of those gaps as I can/want to.

The story of Mike Mills is the story of someone who started clever and gradually dug deeper and revealed meaning in that cleverness. You can tell a former graphic designer was behind some of the artier moments of 20th Century Women and Beginners, but those movies work because their distancing devices get unmasked as Mills’ way to cope with real-world misery. Judging by his one attempt at straightforward emotion, he’s better off sticking with the devices.

For some of Mills’ music videos, the concept becomes more of the star of the show than the actual music. The “concept” of the “Concrete Sky” video is that Beth Orton, and eventually a few unknown men in suits, is wandering around a forest in a red dress. This ties into the song in that “the trees” are referenced in the song’s chorus, but Mills does nothing further with the tree imagery other than Orton walking around them like a parody of a Malick character. It looks pretty (or at least I imagine it does in something other than the ghastly 240p upload that seems to be the only way to watch it), but to seemingly no end other than to provide visual wallpaper for the song. It’s all so aggressively unclever that one wonders if that’s the point, an attempt by Mills to rid himself of his usual affectations and try his hand at something like normalcy. But at this point in his life, normalcy to Mills just looked like a perfume ad, gauze and cliches about the serenity of nature and the ocean. He previously mocked these kind of soft-focus views of the world in his video for Jon Spencer Blues Explosion’s “2 Kindsa Love”, so it’s tempting to read this as a deep-undercover parody, but much more likely it’s just a botched try at sincerity. There’s no ironic distance, but there’s also no feeling in irony’s place.

This came at the tail end of Mills’ music video career, when he seemed more interested in deconstructions of music videos than in delivering straightforward ones (the video after this one, Martin Gore’s “Stardust”, is a taunt to anybody who goes to music videos for rock stars in hotel rooms and hot women). In this light, one can see this as a visualization of Mills having run out of ideas that would produce any kind of conventional enjoyment, a process he would repeat to even more embarrassing results with Thumbsucker a few years later. Thank god he figured himself out soon enough. 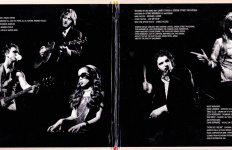