Once a lost film that languished unseen for decades, Vertigo is now quite accessible, readily available for rental and regularly touring streaming services. It’s been in recent rotation on Amazon Prime Video, HBO Max and at the moment on the Criterion Channel. Streaming allowed me to see it for the first time in HD, having memorized it from dozens of watches on a VHS copy of the film’s 1996 restoration. The HD streaming version has the clear, vibrant picture that I presume originated during that restoration, but the soundtrack points to the 2014 4K re-restoration. This is apparent right off the bat when the gunshot effects during the opening rooftop chase blend seamlessly with the rest of the audio instead of sounding like they’re being performed thirty years after the fact.

The incongruously modern gunshots had always been an annoyance for me personally, and the sound of the ’96 restoration, which was also upgraded to meet modern stereo standards, has been a bugaboo for some Vertigo aficionados since its introduction. Cleaning up after the entropy of the medium justified most of the other decisions to add door squeaks, birdcalls and, in one case, a foghorn to hide what restoration supervisor James C. Katz described as the “sins of 1958 – the hisses, pops and bangs.”

Katz’s description comes in an interview toward the end of Dan Auiler’s definitive book on the subject, Vertigo: The Making of a Hitchcock Classic. At the front of the book, Auiler introduces Vertigo by describing it as “a flawed gem – whose imperfections somehow make the work all the more effective.” Which is entirely true. For those who felt Vertigo‘s claws sink into them, its virtues shine through ghost story hokum, mixtures of naturalistic and melodramatic performances (with James Stewart providing both at times), dodgy rear projection effects and of course the technical “sins” that accumulate with any film that dares survive to play in a future time. Restoration has it pitfalls in any case, yet just as beloved Soluter Son of Griff points out that Vertigo is “a movie that animates all of the major theories of film criticism,” so too does the movie toy with ideas about what technical tinkering means for a movie.

For one thing, polishing up Vertigo revealed more scratches. Bernard Herrmann’s all-time great score for the movie was made much more clear by the restoration, digitized from the rediscovered original orchestral recording sessions. Original recordings that, per Auiler again, Herrmann didn’t actually like. Due to a musician’s strike in the U.S., The performance had to be farmed out at the last minute to an orchestra in Vienna without Herrmann conducting. Herrmann complained that the results were sloppy.

This isn’t just a case of artistic bellyaching. It’s much clearer on streaming than it was on VHS that the end of the iconic opening theme, under the Saul Bass-designed credit sequence, sounds like it’s struggling to keep up with Herrmann’s looping arpeggios. It’s especially noticeable compared with re-recordings for later editions of the soundtrack album.

Another painstaking task was restoring the color scheme so important to the film’s effect. The poorly-stored negatives from which much of the work was done – you’ll be spared discussion of the preservation of the VistaVision aspect ratio – as well as the equally time-ravaged existing prints only hinted at the vivid Technicolor scheme detailed in Hitch’s notes. Katz and his partner in restoration, Robert A. Harris, went to great lengths to find the correct hues, researching the original locations and soliciting the Ford Motor Company for a paint sample from Madeline’s distinct green car. Green samples were the most valued, as the right shade was crucial to the most pivotal scenes in the film. 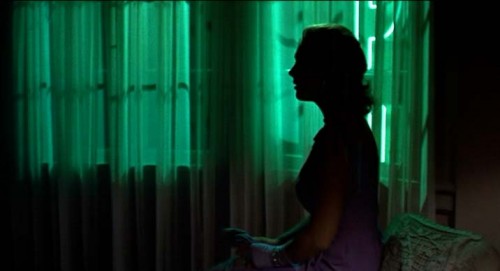 As thorough as Katz and Harris could be, the very reason for the restoration’s necessity – film’s ability to thwart color as it appears in the world – negates at least some of the usefulness of all this research.* At a certain point we’re taking it on faith that the calculations based on research are accurate to what Hitchcock captured. Or we can accept that what the duo approximated is a beautiful choice in and of itself. It’s the shade of green that the majority of viewers who have elevated Vertigo to GOAT status have seen, given the film’s chilly response with 1958 audiences.

Same as the sound, scrubbing the picture can actually reveal messiness. The HD restoration makes it surprisingly clear that nearly the entirety of Stewart and Novak’s final, fatal trip up the tower steps plays out in soft focus. Hitch chose the long take for the mesmerizing performances despite obvious technical problems.

If Katz and Harris approached the process with the goal of perfecting Vertigo, they failed wonderfully.  Vertigo has never been perfect, it only feels that way. Fortunately, their goal was to bring the Vertigo experience to new audiences, and by adding mistakes as often as fixing them, the restoration process participated in the creation of a rediscovered masterpiece.

* Since they also had reports on the color film stocks being used, their attempts are at least not completely nonsensical like the PR around the supposed primary research during the abominable practice of colorizing of movies at around the same time of Vertigo’s restoration. Knowing the color of the original prop means jack when it was intended for black-and-white photography. 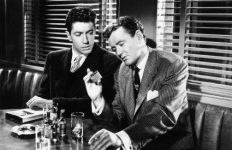