Before he achieved fame and fortune as a musical composer for kids movies, Randy Newman made records in the 70s that featured complex character studies and a sarcastic worldview. In the liner notes to a compilation of his work, he wisecracked that Interiors was Woody Allen’s funniest film.

Thinking about Newman’s remark brought me back to my graduate school training, where I learned how to read against the grain. It is the practice of finding meanings in a text other than those the text might be expected to have.  One example of reading against the grain is to interpret a film, traditionally viewed as a tragedy, as more of a comedy—which is how my reading of Interiors will unfold.

A word of caution: this approach may strike some particularly raw nerves. Whether positive or negative, I welcome your comments. They will have a bearing on how this series develops, or, whether it continues.

Stripping Interiors of what I think are its contrived tragic elements accomplishes three goals. First, the film appears more dramatically consistent. Second, it challenges the presumed differences between Allen in more “serious” artistic mode and his more “comedic” films, such as Annie Hall (1977) and Manhattan (1979), which, respectively, come before and after Interiors. Third, we can better appreciate the cinematography of ace DP Gordon Willis that emphasizes cool precision and a geometric order. The film’s look counterpoints the messed-up, upper-class family we observe, giving us a comic distance.

Let’s start by considering the protagonist, Eve (a rather loaded name, of course), who makes life miserable for everyone around her, namely Arthur, her husband, and Joey and Renata, her two daughters, while the third, Flyn, has escaped to Hollywood. Eve’s backstory is that she was once beautiful, but crazy. Now she’s just crazy, and acts as if she were getting worse.

Averting our eyes momentarily from this glaring stereotype, we can reflect on how Allen’s view of women registers in his comedies. As commentator Son of Griff has pointed out, Allen’s casual sexism often seems defused because it is considered as part of the self-deprecating characters he plays (that tends to be regarded as a fictional version of his own life and experiences). While he does not act in Interiors, Allen shows up, as writer and director, just about everywhere else: all of the family members, other than Eve, sound remarkably like him, from Renata’s fear of death to Joey’s indecision about her career.

Comedies can and do have more serious themes. Renata’s struggle to be a noteworthy writer is given considerable attention, not the least because she is played by Diane Keaton, who gives Renata a visible degree of composure. The depiction of Renata’s struggle, however, is limited by the stereotypical relationship between her and Frederick, a fellow writer—and raging alcoholic—who is wounded by the lack of critical recognition. Trying to console him, Renata says the reason for her success is because, being a woman, the critics have been “lenient” to her. We see Allen rely here on one of the older tricks in the book, disguising misogynistic remarks by having them spoken by a woman character.

The plot moves into high gear when Arthur, who has managed to obtain a trial separation from Eve, shows up with Pearl, his new girlfriend. She is straight out of Screenwriting 101, a character foil, whose purpose is to represent everything Eve is not. Although Pearl is trashy and vulgar, these class differences, owing to the conventions of a comic narrative, are soon enough bridged.

After Eve’s suffocating reign, Pearl is a breath of fresh air, an image of which the film will not fail to remind us at the end. As we would expect, a remarriage is pending, once Arthur is convinced he’s finally free. Meanwhile Eve busies herself being an interior decorator, although her ideas about beauty as requiring an impossible degree of perfection signal a delusional state of mind, just as do her hopes that there will be a reconciliation with Arthur.

The ending uses the final scenes of an earlier absurdist comedy by Allen, Play It Again, Sam (1972), as a template. In Play It Again, Sam, Allen discusses rape, as a hypothetical situation, with Keaton, who plays Linda, his best friend’s wife. What turns into a belated scene of foreplay feels shocking now, from Linda’s saying she would attack her assailant, “unless I was enjoying it,” to Allen’s telling shift to third-person, “They say it’s every woman’s secret desire.” The next day, Allen feels remorse for his night of passion with Linda, imagining his best friend’s committing suicide by walking into the ocean, just like the famous death scene in A Star Is Born (1954).

In Interiors, Arthur and Pearl’s wedding at the family’s beach house allows Frederick, once everyone has retired for the evening, to make his move on Flyn, who is in town for the occasion. But he’s so drunk that, while forcing himself on top of her, he tumbles to the ground. This scene, as disturbing as the rape-as-foreplay innuendo in Play It Again, Sam, segues to another part of the house, where a half-asleep Joey sees the figure of Eve. Joey follows Eve into the ocean, to near certain death, until Pearl rescues Joey and gives her mouth-to-mouth resuscitation. As she has renewed the rest of the family, Pearl works her magic on Joey.

After a brief shot of people passing by Eve’s coffin, which conveys to us that, presumably, it was her ghost that appeared on the wedding night, Joey and Renata look out onto the water and exchange banalities: “Water’s so calm.” “Yes. It’s very peaceful.” For a tragic ending, this lacks the requisite degree of profundity. But for a comedy, it works as a kind of parody of a serious moment.

Therefore, rather than being seen as a departure from his comedies, even going as far, as it is widely believed, to attempt an homage to the weightier themes of Ingmar Bergman, Interiors harmonizes quite well with Allen’s comic riffing in Annie Hall and Manhattan. Taken together, all three films suggest that Allen, moreover, is no less limited in imagining an alternative to women as objects of fear/desire than any other big-name filmmakers of the late 70s, who bring the so-called “last golden age” of Hollywood to a close. 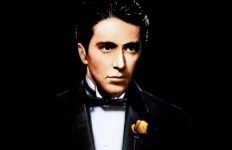 Year of the Month: Doug Wykstra on THE GODFATHER: PART II’s Immigrant Story→ 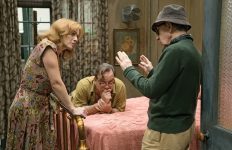