Maybe these didn’t find that magic balance of art and commerce exemplified by the Regal theater chain’s pre-show shorts series pimping Coke and popcorn from the visionary film students canny enough to sell out before giving the Hollywood machine a try. Maybe Regal’s idea of “appropriate to show before a G-rated feature” is too restrictive. Or maybe The Man just can’t face some Hard Truths. I dunno. All I know is these short scripts by students with one noble goal – to inform the public about the availability of popcorn and Coca-cola in the lobby – didn’t make the cut. Judge for yourself.

Patrons flock to the cinema. They’re dressed casual, but just a little dressy, like they’re super-happy to be going out, like the way you dress when Mom and Dad come into town the same week you did laundry. Pan up to reveal the marquee title: LET’S GET TOGETHER.

MARVIN and HUDSON walk up to the concession counter. We dolly in on the guy behind the counter, DEXTER, and it’s clear that he might be a racist.

MARVIN
Hey, my man, how about some popcorn?

Marvin is taken aback. NOTE: Marvin should be black or something so we see that Dexter could be a racist.

He stares down Dexter. Dexter stares back.

HUDSON
–what did you say to my FRIEND?

DEXTER
I just asked if his kind even likes popcorn…

More stares. Hudson won’t back down!

DEXTER
…without a refreshing Coca-cola to wash it down?

Marvin and Hudson exchange a smile.

Marvin and Hudson sit in the front row of the theater (but they’re happy about it). Dexter joins them. They share popcorn and Coca-cola and joke around like old friends.

On the screen as the movie’s title comes up: LET’S GET TOGETHER.

“The Future of Flavor (A Techria Chronicles Installment)”

RIVA, a Class-10 android from THE TECHRIA CHRONICLES* brings up the controls on her holo-interface. She’s an attractive android made in the image of an Earth female, of slight build but, like all Class-10 models, given modifications to make her subtly more attractive to enemies and thus distract them into underestimating her, giving her the advantage in hand-to-hand combat scenarios. These modifications include a firm bosom and an hourglass figure. She’s dressed in a standard-issue Rulon Militia Force uniform which keeps her well covered but without concealing the bosom and figure modifications from enemies.

Riva scrolls past several snack options and makes a face. They all suck. She stretches.

Her uniform has a subtle difference from standard-issue uniforms in that there is a small triangular cut revealing the top portion of the bosom modification, just enough of a modification to prove distracting to enemy combatants and make them underestimate her considerable power.

Riva turns to her Holo-Matter Inducer.

RIVA
(voice like butter)
HoMI – combine the tastiest ingredients in the known universe.

Suddenly, DARKRO enters the skydome and pulls out his neuron blaster. It’s set to death.

Riva delivers a dragon kick to his throat!

Darkro holds up a Coca-cola.

Riva smiles and helps him up.

Darkro is super-built but he somehow never has had to work out at a gym. You could lose yourself in his deep blue eyes and just the way he holds his arms at his sides you know you’d feel safe in their grasp. He’s genetically modified in ways that aren’t visible immediately but you won’t help but notice in other situations. His silhouette would give a few hints.

Darkro and Riva eat popcorn and watch a movie.

(*THE TECHRIA CHRONICLES is as yet unproduced – please email the author for more information.)

DOUG and MILLIE stand in line for POPCORN and COCA-COLA. DOUG looks down at Mille’s hand. He’s NERVOUS.

DOUG and MILLIE are nearly to the front of the LINE. Their hands MOVE CLOSER, almost TOUCHING.

The POPCORN GUY smiles at them.

Suddenly, A MAN IN A DOCTOR’S OUTFIT jumps the LINE. It’s a DOUG’S DOCTOR. He HOLDS UP a clipboard. It says HAND HERPES TEST RESULTS.

MILLIE PULLS her HAND away. THAT is GROSS.

The DOCTOR HOLDS UP A FINGER indicating WAIT THERE’S MORE. He FLIPS to the NEXT PAGE. It says RESULTS: NEGATIVE.

DOUG sits down next to MILLIE holding their POPCORN and COCA-COLAS. She MOVES her hand closer and closer to DOUG’S… and then TAKES some POPCORN! 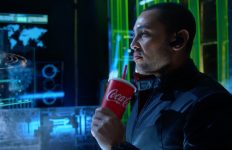 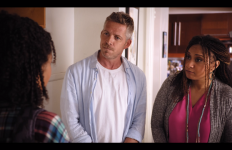 Lunch Links: ARE WE GOOD PARENTS?→ 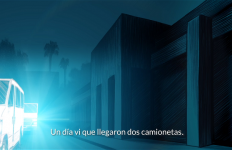