These are difficult times. And in addition to the most vulnerable portions of our population, it’s natural to wonder how this crisis is affecting the nation’s most promising young visual artists. Specifically, how has worldwide pandemic affected those who use their opportunities at prestigious film programs to compete for the right to make a pre-show ad for Coca-cola at a (currently shuttered) Regal Theater?

Fortunately, the creativity of some of these visionaries knows no boundaries other than the strict ones laid out by the 33-page corporate Program Brief. These rejected Coca-Cola Regal Filmmakers have created scripts for ads to reassure us and to inform the public about the things they need to know: that Regal Theatres offer the best movie-going experience when you enjoy your visit with popcorn and refreshing Coca-Cola.

Why these entries were rejected remains a mystery. Is it because their envelope-pushing ideas fail to recognize that “while teens are more overwhelmed than ever, they don’t like to be reminded of stress as that stresses them out more” (page14)? Is it because they violate the directive not to “imply cause and effect as it relates to health claims or leads to supernatural powers” (page 22)? Or are these simply ahead-of-their-time masterpieces awaiting re-evaluation during better days?

MINDY (early 20s, sad) sits at her large bay window. She scrolls through the selfies on her phone from happier times: tanning on a crowded beach (Caption: “Spring Break!!”), fellating a public drinking fountain (“Trip of a Lifetime!!”), making out with Senator Ted Cruz in front of the Leaning Tower of Pisa (“No Regrets!!”)

BEEYOOP! A new message pops up on her phone from KEVIN (mid-20s, happy): WANT TO GO TO A MOVIE? [grinning face emoji]

Another message. Kevin: NO PROBLEM! LOOK UP! [surprise face]

Mindy looks up and sees Kevin standing at the window of his apartment across the alley. He waves.

Kevin opens his curtains to reveal a BIG PROJECTION SCREEN. It plays interviews with actors of a soon-to-be cancelled TBS series.

Mindy opens the door. There’s A BOX OF BUTTERY POPCORN AND A DELICIOUS COCA-COLA on her doormat!

Mindy balances the popcorn and Coke as she replies.

IT’S JUST LIKE A REGAL BRAND MOVIE THEATER! [bowling ball, this is a typo]

Kevin: YEAH! I HAVEN’T CLEANED MY BATHROOM IN AT LEAST A WEEK! [thumbs up] JUST VENMO ME $35 AND I’LL START UP BLOODSHOT! [flexing arm]

No reply. Mindy looks out the window.

Mindy is disappointed before remembering the popcorn and Coke. BEYOOP!

Message from Daisy: WANT TO WATCH WHATEVER CRAP IS ON A STREAMING SERVICE TOGETHER?

Mindy: NO WAY. I’M SAVING MYSELF FOR THE REAL DEAL!

Rack from the phone to Mindy’s framed photograph of her local Regal Theater. Mindy sips her Coke and smiles like it’s the first caloric intake she’s had in a week.

“The Cure for Thirst”

A scientist in his thirties with a lab coat is working really hard at his microscope. Another scientist enters and walks up to the first scientist. They are diverse. The second scientist talks.

SCIENTIST 1
Are we almost done? I want to go to a Regal Theater movie tonight.

SCIENTIST other
No can’t you see in the microscope? we need to solve covid before a movie

The scientist looks through the microscope

This part is animated. A big, nasty virus comes floating by. It lifts up one of its spiky things like its giving the finger then punches a healthy cell in the face.

The scientist stands up again.

Scientist enters. This is the third scientist and is also diverse. She is holding a refreshing and fizzy Cocacola drink cup.

SCIENTIST2
Oh monkeyshit can I see?

She leans over to look into the microscope but some of her cocacola spills! A drop flies through the air in slo-motion past the scientist and lands on the flat part of the microscope

The Scientist look at each other. Then they look at the microscope.

The virus floats up to the big drop of Coke and then sucks it up. It shakes. Then it explodes!!!

The scientiests celebrate! They did it!

The healthy cells dance around the Coke dancing and wearing hats.

The scientists sit down in a full movie theater. Everybody holding Cokes and popcorn. The diverse crowd around them looks happy and healthier than they did before

FIONA and JEN FaceTime. Each one sits in a COMFORTABLE REGAL THEATER RECLINING CHAIR.

JEN
I can’t believe you were able to self-isolate
in the Regal 14 on Tenth Street!

FIONA
I can’t believe YOU chose the Regal 16 on Madison!

JEN
There wasn’t a wrong choice!

FIONA
And I’ve got something to make it better!

She holds up a tub of BUTTERY POPCORN. Jen holds up her own tub.

FIONA
(cont’d)
Best of all—

FIONA & JEN
(unison)
Nobody to have to share it with!

JEN
I’m using humor to deflect from my fear. I have vulnerable
people in my life and I’m scared for them. People are suffering
and dying and it’s only the beginning of something worse. Our
leaders are unprepared to deal with this and I can’t help but feel
that while I indulged in popcorn and movies, the world edged itself
over a precipice and all that’s left is the fall. I try to make connections
on social media but it only worsens the depression. I don’t know what
the world on the other side of this looks like, and I’m cut off from the
people I might have shared this fear with, whose embraces might have
made me braver, happier, healthier. It’s too late for so many things
and I fear discovering what those things are alone.

Fiona holds up a Coke.

Jen does the same.

They clink their Coke cups against their phones and laugh. Their laughter continues, reverberating through their empty theaters.

It reverberates through the empty lobby.

Through the empty parking lot.

Through the empty streets. The sound is barely recognizable as laughter. It could be the involuntary cries of distant animals. It could be the whirring of an abandoned ice machine, forever cooling its contents for an public not there, waiting to quench a thirst that doesn’t exist.

A crow takes off in the waning light.

(Note: Per page 23 Fiona’s cup should have the Classic Coca-cola label, Jen’s the Coke Zero logo.) 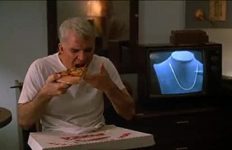 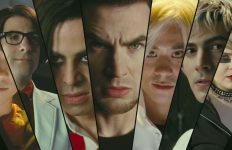 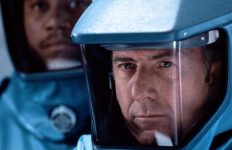