Editor’s Note: Yes, we did see the Return of Twin Peaks, but…how do you expect anybody to be able to review it episode by episode. The first two hours of Season 3 is weapons-grade David Lynch, pulling from his post-Fire Walk With Me filmography, namely Lost Highway, Inland Empire, and Mulholland Drive, I do ask the first people to discuss what we witnessed to start a separate thread for it apart from the “What Did We Watch” segment for easy hiding from those who don’t want to know. Thank you.

Editor’s Note #2: I will say this about it: I am really glad this form of Twin Peaks exists right now in the America we find ourselves in. There’s something so awesomely Now about it.

Editor’s Note #3: No, we haven’t forgotten about the recap of Twin Peaks original flavor. I have the final two episodes mostly written out, but I can’t wrap my head around what I want to say for the final sequence of the show.

We here at the Seattle International Film Festival absolutely love Alex de la Iglesia. Back in 2010, SIFF showed the utterly magnificent The Last Circus, a surreal assault of dark humor and bad taste combining with gorgeous imagery. If you haven’t seen The Last Circus, it’s probably de la Iglesia’s finest achievment. Since then, SIFF has shown all of his feature films except My Big Night, with his features ranging from the quiet As Luck Would Have It to the insanely misogynistic but completely original horror-comedy Witching and Bitching.

His latest feature, The Bar, is his take on a familiar formula: a group of people are trapped in a bar when a shooter kills random citizens on the street. They attempt to call for help, but they can’t get phone reception, and then the people outside start disappearing. The opening credits play against a variety of microscopic creepy crawlies from worms to strands to mitochondria, hinting at what the movie is actually about.

It’s a movie completely in the vein of The Mist or [REC] or any number of bottle horror movies trapping people in a confined space and trying to survive. The characters are full on Alex de la Iglesia’s stock characters, which means this gets weird fast. There’s a dirty bum who quotes Jesus, a self-centered woman on her way to a hookup with a guy in a Ramones T-shirt, a fat schlub who runs to the bathroom, a beardy techno-geek, the aggressive older woman, and a half dozen more. The game of “Who Will Survive and What Will Be Left Of Them” gets interesting fairly quickly, especially as the movie reveals itself.

De La Iglesia’s direction is what keeps this movie popping right along, peppering the movie with extremely dark humor, grotesquery, extreme violence, and moral judgement. For some, this was a nail biter of a thriller, one with questionable decision making and a great engine for suspense. It’s a blast. 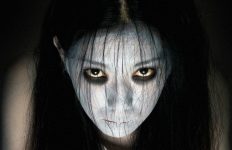 Year of the Month: Quinn Bailey on JU-ON→