Aside from this opening line, every sentence is lifted from an article posted on The Solute in 2018.

Tom Hanks wasn’t allowed to smoke as Walt Disney in Saving Mr. Banks.
David Cronenberg remarked that title sequences in movies were like “vestibules,” transitional spaces between the outside world and the world of the movie, where you take off your jacket, get comfy, and adjust to this new place before you go fully go in. The cover of In The Wee Small Hours features a painting of Frank Sinatra leaning against a building on a street corner, lit cigarette in hand, sharply dressed and wearing his trademark fedora. John Travolta is one of the oddest movie stars Hollywood has ever produced. Standup comedy is both a relatively young art form and one that takes a surprising amount of craft and effort to perfect. What happens when you cross Full Metal Jacket and Fight Club, and sprinkle in bits of David DeCoteau’s repressed homoerotic fetishism? There have been better weeks for home video, I’ll say that much. My parents were anti-fast food when I was growing up, and as a result I can count on one hand the number of times one or both treated me to it. The central premise of Bright is so good.

You’d be excused for thinking the monthly subscription movie service MoviePass is dead. Nobody knows if it was an accident or suicide, but his body wasn’t recovered. You’re born with a perfect soul, and every sin you commit degrades it. Even if Fariña’s last words were slow down slow down slow down, this was a man who, if he wasn’t looking to die, wasn’t trying all that hard to stay alive. I was one of the very few people who saw Freddy Got Fingered in theaters. Character motivations become clear only after character deaths. This isn’t yet a story about characters who make bad decisions. It is, possibly, one about happiness that’s too good to be true.

For those of us without a genetic or emotional connection to Russia’s WWII losses, the biggest draw here is, of course, the artwork. Nolan’s use of abrupt, jarring editing to build tension and end scenes with a jolt would likely get a polite nudge out the door now. He’s aided in this by Darius Khondji shooting the dinge of the ship with warm colors gradually darkening and coating the aliens’ heads with extra KY jelly to get reflective pop. Hanson’s aesthetic, in contrast, is shaped by Technicolor and two-fisted machismo. He claims not to have a distinctive musical style. This is, of course, ridiculous; there have been movies he’s scored where I identified that it was his work before the studio logo even faded from the screen.

I don’t quite know what Suttree does after the last lines linger: does he get married again, have another boy, live the life his father always wanted for him of prosperity and influence? Does he just find another houseboat to sleep in, in another city, another state? Shouldn’t we be encouraging people to try out new films instead of shaming them for their current artistic blindspots? Either way, it seems like a happy ending, but the careful listeners are rewarded — or is it punished? — with yet another twist. Tom Hanks wasn’t allowed to smoke as Walt Disney in Saving Mr. Banks. 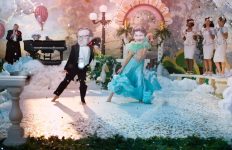