So I saw Mad Max: Fury Road this past weekend. It was excellent, but I’ll leave it to others to offer a full review (there have already been many, mostly positive: The Dissolve’s Keith Phipps gave it five stars and the “Essential Viewing” tag, and even The A.V. Club’s A. A. Dowd gave it an A-, a rarity that inspired almost as much discussion in the comments as the film itself). Rather, I felt moved to comment by the discussion of the film’s supposed “feminist” message: I don’t just mean the obvious MRA nutjobs whose calls to boycott Fury Road have gotten them a lot of attention in the last week (I won’t bother to link them, but if you’ve followed this story at all you’ve probably encountered their remarks). The fact that they accuse the Australian series’ writer-director George Miller of desecrating an “American” icon says more about the validity of their arguments than any point-by-point rebuttal could.

It should be obvious that the MRA faction objects to Fury Road (or at least what they’ve heard about it, since clearly many of them haven’t seen it) for the same reason that the film is being celebrated by many mainstream critics, fans, and feminists: it co-stars Charlize Theron as a powerful female warrior who is every bit Max’s equal in battle, and with whom, after captivity and an uneasy truce, he makes common cause.

It’s true that the film belongs as much to Theron’s Imperator Furiosa as it does to Max (Tom Hardy, replacing the original trilogy’s Mel Gibson), and that’s apparently enough to set chauvinist teeth on edge, but that’s not the radical part of Fury Road. Nor is it a first for the series, or for sci-fi action in general. In a recent blog post, The Guardian’s Ben Child nicely reminds us of strong women such as Ellen Ripley of the Alien series and Sarah Connor of Terminator fame. He also points to Warrior Woman in The Road Warrior and Auntie Entity, the wily, charismatic leader of Bartertown played by Tina Turner in Mad Max: Beyond Thunderdome as capable, significant women in the Mad Max series. Clearly George Miller is not a new convert to the creation of strong female characters. Child is correct, but he doesn’t go far enough.

The dictatorship against which Furiosa rebels has a distinctly patriarchal character and is contrasted with a self-sufficient clan of women: warlord Immortan Joe is a literal father to his people, keeping a harem of enslaved “breeding stock” and raising his many inbred sons as “War Boys” who live only for the glory of battle and the hope of ascending to Valhalla if their death pleases papa Joe. As exemplified by Nux (Nicholas Hoult), an invalid who inadvertently draws Max into the conflict by tapping him as a personal blood supply, the War Boys’ veneration of Immortan Joe combines worship for an incarnated god (early on, Nux is ecstatic that Joe even deigns to look at him) and a childlike need for their father’s approval. In its design and the behavior of its characters, Immortan Joe’s Citadel (a hollowed-out mesa made accessible by ingenious future-primitive pulleys and retractable platforms on an enormous scale) is as hierarchical and regimented as Pharaonic Egypt or the Inca Empire. Joe is literally and metaphorically at the top, with power and influence flowing downward to the serfs who gather at the very bottom of the mesa to beg for drops of the fresh water Joe controls.

It is in his organization and the mental control of his people that Immortan Joe differs from Lord Humungus, the superficially similar villain of The Road Warrior. Immortan Joe’s Citadel, as cruel as it is, appears to work, in the sense that the trains run on time. It’s not so great for women or for the serfs, but Joe has convinced them that this state of affairs is as inevitable (and necessary) as the rising and setting of the sun. It is The Way Things Are. Joe’s cult of personality represents the solidification of an ideology that must be challenged (represented again by Nux, whose experience leads him to a change of heart) before evil can be overcome. This is what makes Furiosa’s liberation of Joe’s wives so dangerous for him: more than the loss itself, it calls into question his right of ownership, his place at the top of the pyramid.

The Guardian’s Mark Kermode points out in his review that, while Furiosa represents a classic “butch” interpretation of the female warrior, the wives are much more typical damsels in distress, noting, “for all its avowed feminist credentials Miller’s film can’t quite reconcile its horrors-of-patriarchy narrative with its exotic fashion-shoot depiction of ‘The Wives’, leaving its gender politics weirdly conflicted.” Kermode has hit on a problem that has bedeviled critics and artists alike: how is one to depict exploitation (particularly the exploitation of women) in a way that is not itself exploitative? In the first scene in which the wives appear, Furiosa is removing their chastity belts with a bolt-cutter: it would be hard to think of a more pointed symbol of women taking control of their own bodies.

But Kermode isn’t wrong to point out that the wives seem dropped in from another world: they are beautiful, glamorous, and clean, the obvious product of pampering and sheltering. (Later in the film, a weather-beaten old woman comments to the same effect, noting how soft the girls are.) Importantly, our first view of them is through Max’s eyes; a man of few words, we don’t really know what he thinks or feels when he sees them, other than surprise. Miller effectively throws it back to the audience, asking, “Well, what do you see?”, but he takes for granted that the male gaze will be present no matter how these women are depicted. It always is.

One of Fury Road‘s trickier inversions hearkens back to Mad Max’s origin story, back in the first film, thirty-six years ago. In Mad Max, patrolman Max Rockatansky’s wife and child were killed by a vicious biker gang led by Toecutter, driving Max to vengefully hunt down the members of the gang, Death Wish-style. The film ends with Max hollowed out, driving the highways with nothing left to live for except survival itself. This is the default characterization with which each following installment has begun: Max wandering the wasteland until he is drawn into someone else’s story and finding that his innate (decency? sense of duty? need for a purpose in life?) compels him to help out.

In Fury Road, one of Immortan Joe’s wives, Splendid, carrying his child, is killed by falling from the speeding war rig and being crushed by its wheels. Recovering the body, Joe and his men perform a C-section and find that she would have given birth to a son, “perfect in every way.” Joe was livid at Furiosa taking his wives from him before, but after this scene It’s Personal, and he rejoins the pursuit with only vengeance in mind; the fact that Hugh Keays-Byrne played both Toecutter in 1979 and Immortan Joe in 2015 suggests that this role reversal is no accident.

But what, if anything, is Miller trying to say by linking these two installments in such a way? What makes Max a hero and Joe a villain if it all boils down to fighting over women as trophies? Most obviously, Max’s grief is informed by his love for his family and the sense that he has failed in his role as protector; Immortan Joe rages at having his property stolen from him. But I would also put it down to changing attitudes. It’s hard to reconcile the fascist elements of Mad Max–the disdain for courts and civilian experts; the temptation to enact rough justice on the streets–with the anti-patriarchal bent of Fury Road, other than to point out that Mad Max was very much a product of its time and genre, and to recognize that George Miller is more empathetic than he’s sometimes given credit for.

Despite the Mad Max series’ well-earned reputation for violence and brutality, there’s a humanistic bent in George Miller’s work. In Mad Max, his sympathy is with the victims: not just Max’s ill-fated family, but a young couple terrorized by Toecutter’s gang. The scene in which the couple’s car is destroyed–a violation clearly meant to stand in for the girl’s off-screen rape–is horrific, and unlike many rape-revenge films of the 1970s, there’s nothing titillating about the way it’s portrayed. When Johnny, the gang member caught at the scene and charged with the rape, gets off on a technicality, the patrolmen’s anger is made palpable and understandable (and ultimately Johnny’s punishment is more gruesome than that of Toecutter, the gang leader).

If Miller is better than most at expressing the frustration of good people unable to stop civilization’s steep decline, it’s in part because he doesn’t soft-pedal the price of violence. As grandiose and baroque as Miller’s vision is, it is not a romantic vision: it’s the original “grim and gritty.” Unlike fellow action filmmaker John Milius, Miller remains acutely aware of the suffering experienced by those on the fringes and at the bottom. The will to power is not Max’s motivation. Not for him is Conan’s desire “to crush your enemies, to see them driven before you, to hear the lamentations of their women.” In Miller’s world, those sound like the words of Lord Humungus or Immortan Joe.

Is George Miller making an overt political statement with Fury Road? Perhaps; having his actresses talk about human trafficking with author Eve Ensler certainly indicates that he is trying to get things right and not simply using sexual violence as a prop. I have no doubt that Imperator Furiosa will join Ripley and Sarah Connor as icons of female strength. But this isn’t a new turn for Miller: his filmography shows a longstanding awareness that women suffer disproportionately in times of warfare and social chaos. Fury Road differs only in placing that reality directly in the foreground.

This article was informed by discussions with fellow commenters at The Dissolve, and by revisiting several classic action films of the 1970s and ’80s (including Mad Max) at the Return of the Cults series presented by Wichita Big Screen. Thanks to those who helped me sharpen my ideas. 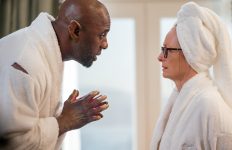 The Friday Article Roundup: Get Comfortable→