Tune in Next Week is an ongoing feature, examining serials one chapter at a time. You can watch Chapter Five here. 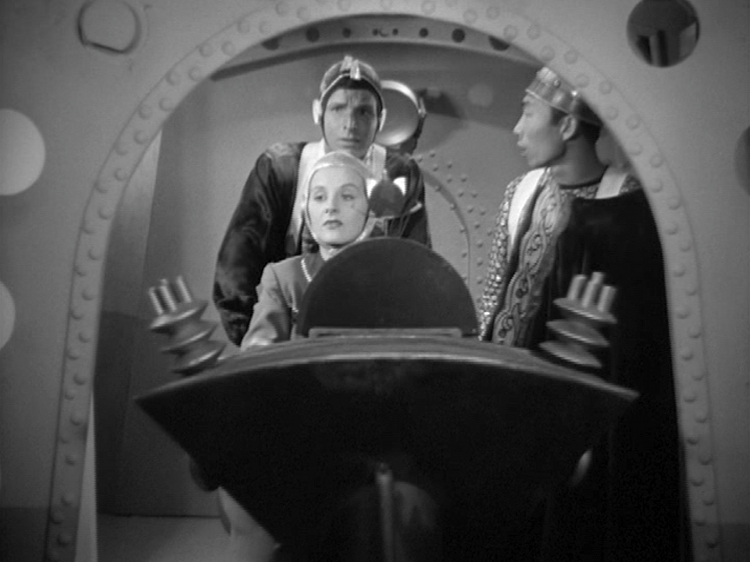 “See, Tallen, what we’ve been forced to do to escape Kane and his outlaw army?”

“With the help of my planet, Saturn, you will soon see the end of Killer Kane.” 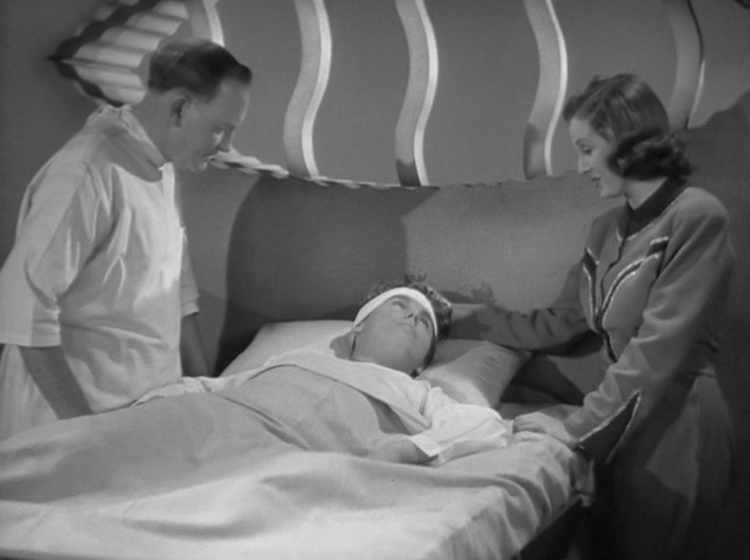 All right, now things are starting to cook! The characters and situations set up in previous chapters are snapping into place and beginning to pay off earlier plot developments. Although there is as much running and flying from one place to another as in previous chapters, not to mention scenes of characters speaking into radios, the breathless action slows down enough to give us some fine character work. I love the over the top pronouncements one finds in the serials, and in this chapter there are some nice contrasting scenes of competing leaders Dr. Huer (Montague Shaw) and Killer Kane (Anthony Warde). The former is didactic, patrician, and chooses his words carefully, like a kinder, gentler Oz (and why shouldn’t Huer be a nice old grandfather? He has Air Marshal Kragg to be the bad cop). The latter blusters and bullies his men, using whatever carrots and sticks he has at his command to get results; as opposed to many mad scientist or politically-motivated villains, Kane is drawn directly from the gangsters of contemporary crime films, a literal “robber baron.” (I could never prove that there’s a connection, but Kane reminds me quite a bit of Al Pacino’s Big Boy Caprice in Dick Tracy. Maybe it’s the mustache.) 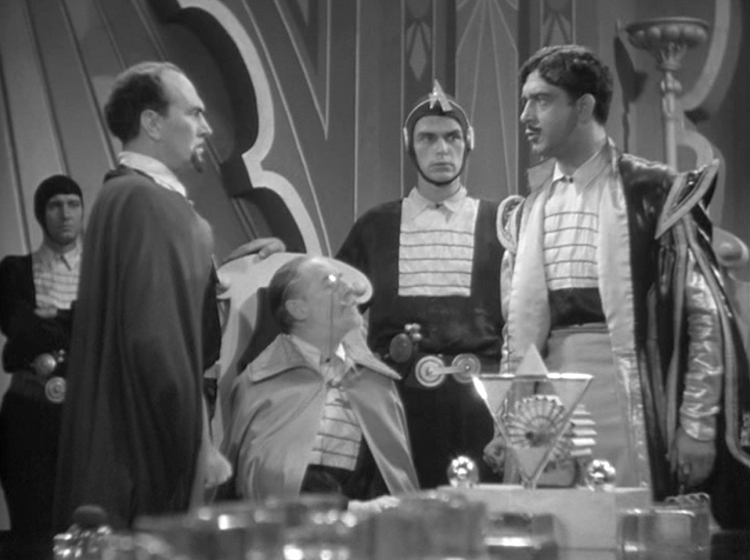 Both leaders have an array of high-tech toys at their disposal, but they reflect their owners’ character. In Kane’s city, we finally get a close-up view of the Leader’s robots (or “robuts,” as if Dr. Zoidberg were the dialogue coach), as he sentences the wonderfully-named Councilor Krenko to enslavement for daring to question Kane. (Krenko was the same councilor who challenged Kane in Chapter Four.) As Edgar Wright reminded us in The World’s End, “robot” is a word meaning “slave” (from the Czech robota, the labor of serfs). By having a coffee pot strapped to his head, Krenko (like all the other victims of Kane’s misrule) is drained of his identity and will. Sometimes the phrase “living robots” has been used in this serial to distinguish them from mechanical automatons, but they are just as subject to Kane’s command as any programmed machine. (Mind control is a common device in many serials, pulps, and comics; sometimes the term “zombie” is used, reminding us that before George Romero, the horror of the zombie was not only its relentlessness but its enslavement, even past the point of death.) “One more dead mind in the ranks of the Leader’s enemies,” says the guard who straps Krenko in: is there a more evocative phrase for the oblivion that awaits those who would try to stop the whirring gears of a fascistic technological agenda? 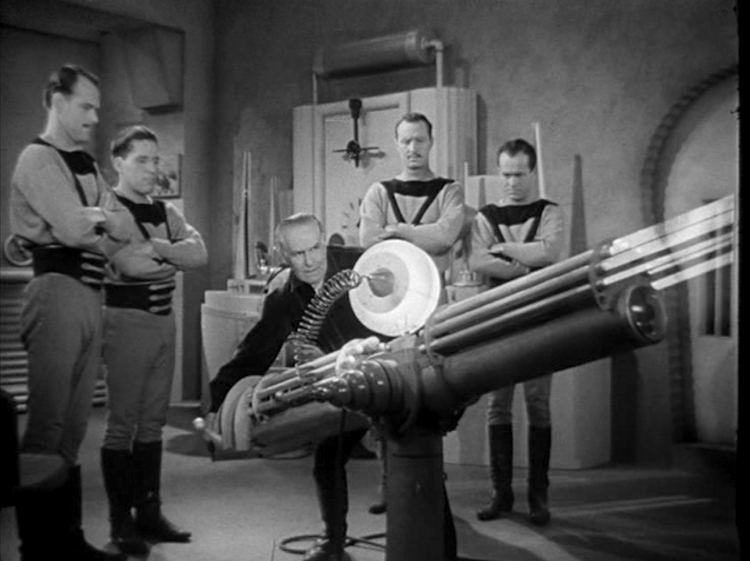 By comparison, Huer shows off his latest creation, a purely defensive invisibility ray. (Even the way in which he seems to suddenly recall this new invention, as if he had been conducting pure research until forced by necessity to put it into practice, speaks volumes about how we are meant to understand Huer’s character: the absent-minded professor as defender of his people.) Just as Huer’s city is hidden within a mountain, camouflaged by sliding rock walls, so will the new mission to Saturn be cloaked, slipping by Kane’s blockade unseen. Interestingly, the scenes involving the ray, both its demonstration and its final application, emphasize its uncanniness: playing the slow student to Huer’s lecturer, Buck Rogers first assumes that the ship has been destroyed when the ray makes it disappear; later, as Buck, Wilma, and Tallen fly through the upper atmosphere invisibly (an effect achieved through double exposure) they comment on the “strange sensation being up here in a ship we couldn’t see.” In these moments we vicariously experience something that we are all familiar with, but which is rarely the focus of this kind of science fiction: the sense of disorientation in the face of the new. 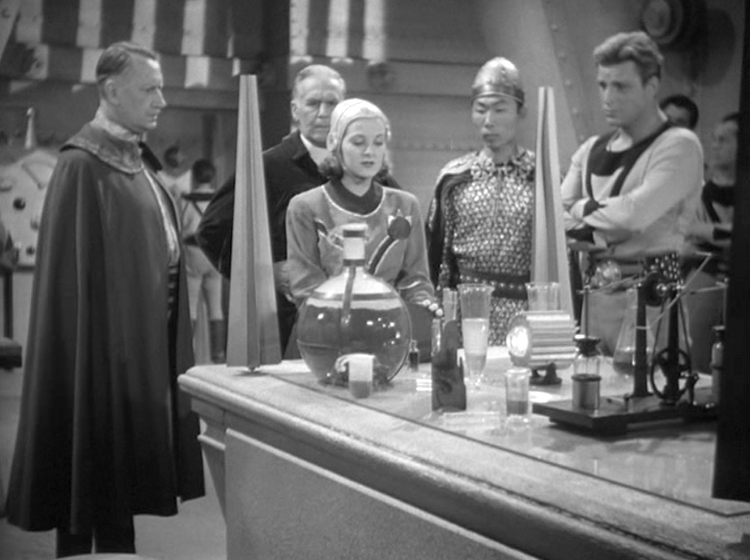 Incidentally, this is a marvelous chapter for fans of retro sci-fi gadgetry. (The radio mouthpieces hovering in mid-air, seen before and in this chapter, are a nice touch.) In addition to Huer’s “dissolvo” ray (oh, 1930s, always with the rays) and Kane’s mind-control helmets, there are many scenes involving ships, inside and out, including an ambitious dogfight sequence. If you were the type to own copies of the starship Enterprise‘s blueprints, you will find plenty of specific information in this chapter about how the ships function: apparently each burst of forward or retarding propulsion comes from a rocket that must be fired individually. So when the “rocket tubes” are damaged, as was the case with Killer Kane’s private ship, stolen by Buck Rogers, the ship is not only defenseless, it cannot fly properly. That also explains why even small fighter craft carry crews of two or three (or more). 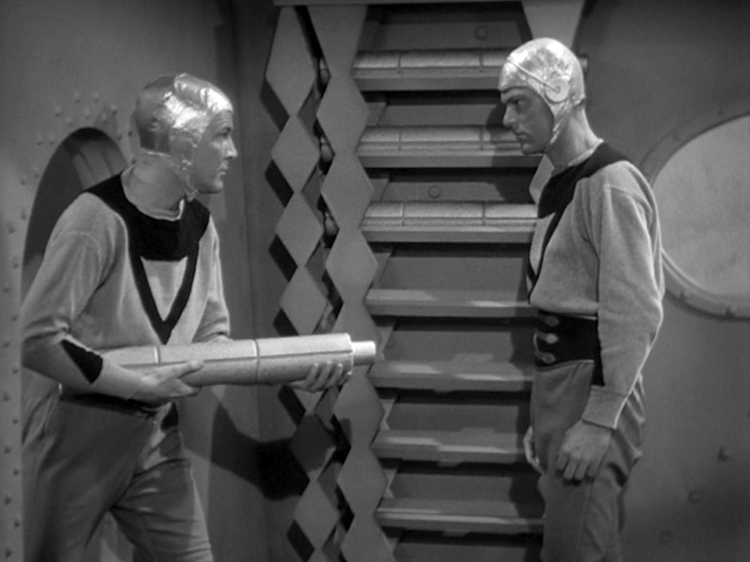 I’m pretty sure that in 1939, while space travel was still in the realm of speculation, at least some science fiction writers had come up with the idea of rechargeable fuels for rockets (or at least assumed that something would be developed); not so the production designers and special effects men at Universal, who didn’t have the luxury of leaving such matters to viewers’ imaginations, and who had to give the actors something to do to look useful, even if it was pure balonium. (On the other hand, as Hypercube Villain pointed out last week, every shot of ships in motion is accompanied by a constant hum, like the sound of an airplane engine, so perhaps it’s best not to think too hard about any of this. Suffice it to point out the obvious: the loud engine noise and explosions in the airless vacuum of space that annoyed nitpickers watching Star Wars in 1977 have their antecedents in this and other science fiction movies of the 1930s, and even in the ’30s it was probably a case of not letting real science get in the way of a thrilling spectacle.) At least it gives us the exciting sequence in which one of the rockets ignites during loading and Buck Rogers rushes to turn off the circuits, metaphorically jumping on the grenade while everyone else runs away from it. Again, the revelation of character in this moment is more important than the logic underlying the fictional technology. 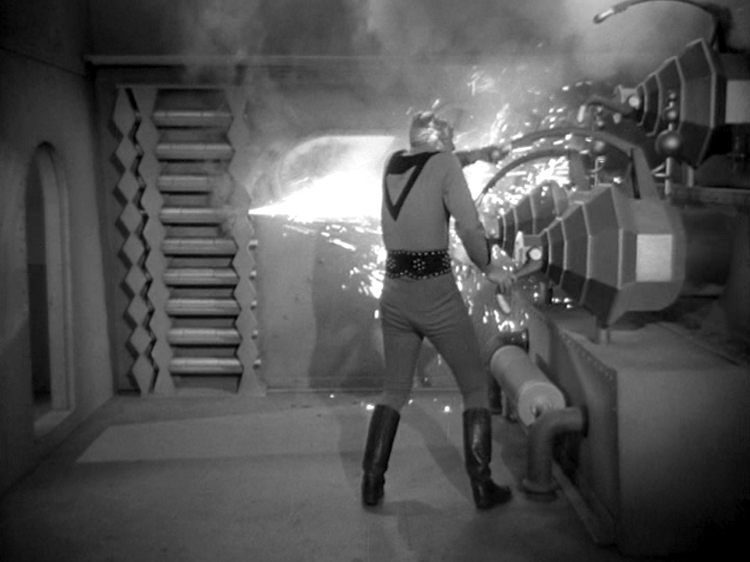 Despite the larger-than-life performances and the prominence of all those cool props, there are several small moments that I also liked in this chapter: the little smiles that pass between Buck and Wilma when they reunite and when Wilma suggests that she accompany Buck and Tallen to Saturn are an indication of some chemistry between the pair (beyond the foregone conclusion that comes with being the only woman in the cast). Likewise, while Buddy is temporarily out of commission because of injuries taken from Kane’s patrol’s bombing, he shares a quiet moment with Wilma; his first concern upon waking up is for Buck and Tallen. I also love the subtle look of eagerness that passes over Captain Laska’s face when Kane offers him Krenko’s former seat at the Councilors’ table as a reward for successfully cutting off Tallen’s return to Saturn. This is only moments after witnessing Krenko’s fate and being given a second chance himself, but Laska knows how it is: you move up or you move out, and unlike Krenko, Laska is a company man through and through. 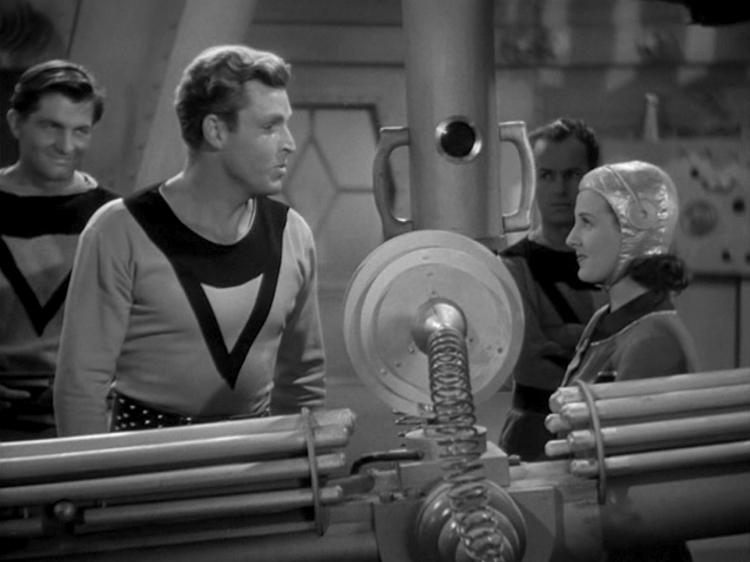 Cheek-by-jowl with the awesome wonder of outer space, it’s still a day’s work: it’s amusing to hear Buck’s casual twentieth-century diction on the Saturnian surface when the three heroes investigate Laska’s ship (unknowingly stepping into a trap): “I tell ya whatcha do: run over to our ship and get a wrench,” he says. Wouldn’t you know it: it made the same noise on the drive all the way over here, and now it’s quiet. After Laska traps Buck and the others in the ship and floods it with poison gas, he casually says, “That ought to take care of them,” as if he had just replaced a pair of worn-out wiper blades. That seat at the table is as good as his. 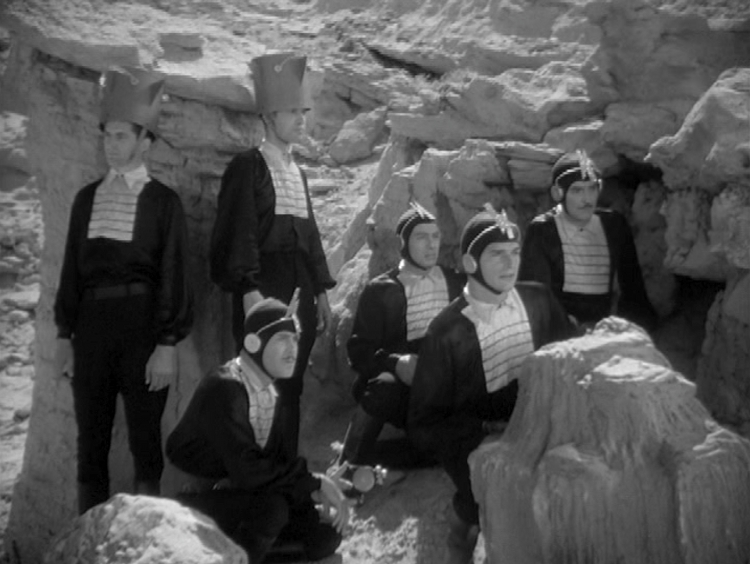 Is this the end for Buck Rogers and his allies? Has Kane’s henchman accomplished what Kane himself could not? Tune in Next Week to find out in Chapter Six, “The Unknown Command,” as Kane decides that maybe switching all of his servers to UNIX really wasn’t worth the hassle after all.