Browse: Home / What the F? Babalugats on LOST SOULS

Since Cinemascore began operation in 1979 only 19 films have received the lowest score. In this series I’ll be reviewing those 19 films. This week, Steven Spielberg’s go-to cinematographer, Janusz Kamiński, gets his first shot in the big seat and delivers exactly the sort of movie you’d expect from an Oscar-winning cinematographer with no writing or directing experience.

Lost Souls is a high minded and reserved take on an Antichrist thriller. Originally planned for an October 1999 release, it was pushed back to February 2000 in order to avoid a showdown with the similarly themed Stigmata (B-) and End Of Days (B-) (both movies featuring Gabriel Byrne, who must have suspected something was coming), and then pushed back again to avoid getting crushed by Scream 3 (B), before finally opening in October of 2000 and facing off against the re-release of The Exorcist. It’s one thing to run from Arnold Schwarzenegger or Wes Craven, but one must stand their ground against movies old enough to run for Congress. And so Lost Souls limped into theaters, where it opened in third place and was quickly forgotten.

Like all movies that lack the courage of their convictions, Lost Souls opens with a block of expository text, this time in the form of a fake Bible verse:

“…a man born of incest
will become Satan
and the world as we know;
it will be no more”

A few problems right off the bat. First there’s no “Deuteronomy Book 17”, that’s not how Bible verses are cited, and Deuteronomy is just the one book all on its own. Deuteronomy is also a book of law, not prophecy.  The movie should be pulling from one of the spookier books here. If Revelations is too on the nose, then at least an Isaiah or Ezekiel. But theology aside, the real problem with this quote is that it doesn’t feel very Bibley. It’s no, “And you will know my name is the Lord when I lay my vengeance upon thee!” It doesn’t have a Biblical cadence or a Biblical vocabulary. It sounds more like a script note, explaining the premise to a particularly dense producer. You can see they realized this late in the game and tried to cover by swapping that semicolon to the wrong side of “it”, and opening with an ellipsis so that we can at least imagine some Bible sounding shit coming before, but its too little too late. After the title card the movie settles down a bit, maybe a bit too much, and we get right into the plot.

Winona Ryder is a woman who was once saved from her own demonic possession and is now an unshakable and devout Catholic who, in her free time, assists a group of priests in their battles with the forces of Hell. After a botched exorcism leaves her friend and mentor (Father John Hurt) in a coma, Ryder discovers an apocalyptic prophecy in the rantings of the demon, and begins experiencing terrifying visions of her own. The prophecies in this movie are refreshingly direct, full of useful information like names, dates, and addresses. This one tells us that Ben Chaplin will become the physical embodiment of Satan upon his 33rd birthday. Ryder goes to warn the man, though cautiously, fully aware that this story is unbelievable.

We get to meet Chaplin a bit.  He’s a wealthy and successful psychiatrist, has written several true crime best sellers, and is married to a beautiful woman whom he loves. He’s also an atheist, though not a militant one, and he still has a good relationship with his uncle (Philip Baker Hall) a priest who raised him as his own son after the death of his parents. Chaplin is skeptical but intrigued by Ryder, and soon he begins experiencing strange occurrences of his own and discovers himself at the center of a vast satanic conspiracy.  With his life unraveling and his deadline quickly approaching, he turns to Ryder for help, but it’s too late. After a few last ditch efforts for salvation fail, they park their car, Ryder holds a gun to his head, and the two wait for his transformation. Chaplin begs her to kill him before he turns, but she won’t as long as there’s hope. When the hour turns over and Chaplin remains, he says that he has been spared and begs her to give him the gun. But she recognizes the demonic forces at play and kills him. She exists the car, and walks off alone into the night.

An abrupt and anti-climactic ending, uninvolving characters, and a style of horror that’s heavy on the atmosphere and light on the jump scares. This is also the second exorcism movie we’ve covered, and I wonder if audiences are particularly sensitive around the genre. Perhaps some people are objecting as much on theological grounds as artistic ones.

Interestingly Lost Souls opened opposite Dr T. & The Women, so after over twenty years of never issuing an F, Cinemascore would give out two on the same day. Perhaps people were just in a bad mood that week. Maybe the theater where they conducted the survey had a projector on the fritz, or the heat was out. The sample size that Cinemascore is working with is so small that if somebody farts during one of the screenings, it will show up in the data.

Lost Souls is intense, creepy, and atmospheric. A waking nightmare with an ever-present sense of dread, a subtle wrongness twitching at the edges of the frame and pulsing beneath the carefully composed normalcy. It’s a beautiful, if sometimes overly busy, film, well cast, well performed, and well plotted. Sometimes with this genre, movies spend too much time setting everything up, with all the incident crammed into the final act. But Lost Souls doesn’t suffer from this, with exorcisms and hallucinations keeping the early going lively before the dark secrets and demonic conspiracies can come to a head in the climax. It is also a short film, coming in well under two hours, and if it’s not quite fast paced it’s at least always steadily moving forward.

What Lost Souls isn’t is an engaging story. It lacks emotional stakes. We don’t know what these characters want beyond simply the continued survival of the species and they hardly react at all to the events in their lives. When Chaplin discovers, for example, that the man who raised him is not only his uncle but also his father, having had a secret incestuous affair with his mother, his reaction is “Hmm, I suppose that is in keeping with this obscure biblical prophecy.”  When his wife is shot dead in their living room, moments after he discovered her role in a conspiracy to turn him into the physical embodiment of Satan, he responds with mild surprise.

Now, the disposability of life is not a bad theme for a cosmic horror story, and the dull affect of the characters and the way that the plot seems to happen to them rather than their choices driving the story goes a long way to creating the nightmarish vibe of the film. But it also makes it hard to care about them. This is most evident at the climax when what ought to be a huge emotional moment, with both our protagonists putting their lives and souls on the line in the absolute test of faith and sacrifice, instead feels like a very perfunctory conclusion of the plot. That ending has grown on me. I like my horror melancholy and about moral degradation and cruel truths that can’t be unlearned, but I have to admit, my first reaction was, “That’s it?”

The movie would also have been wise to choose one protagonist and stick to their perspective. There should be a certain amount of mystery surrounding these characters, whether it’s the strange girl who’s telling you your life is a lie, or the seemingly nice man who you believe is destined to become the Antichrist. But jumping between the perspectives the way we do, robs the film of this tension, which is a problem when the rest of the movie is so subdued and low key.

What can you say about a movie that does everything well except the one thing that matters? Lost Souls is a great movie and a terrible story. I enjoyed it, and would recommend it, but with the caveat that it’s not very good and you probably shouldn’t see it. 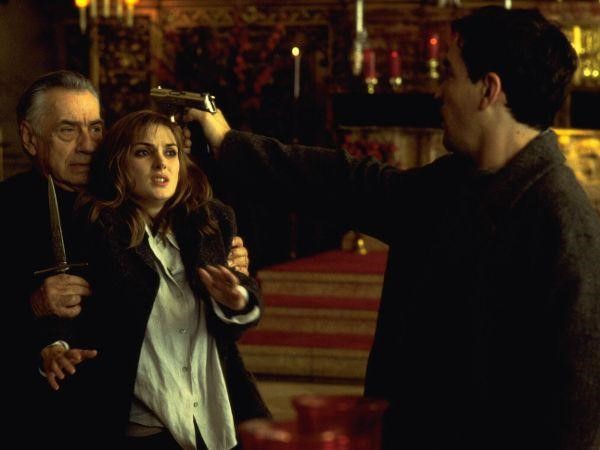 Next Time:  What strange unholy noises do you hear in the Darkness? It’s the audience leaving the theater.