To properly contextualize Crazy Heart, we have to go back two years. In 2007, Walk Hard: The Dewey Cox Story was released, and fit into the same category of incisive music satire as This Is Spinal Tap (1984). While Spinal Tap mocked the macho fantasies and delusions of grandeur of a washed-up hard-rock band, Walk Hard took dead aim at the music-bio film, in general, its trite rise-fall-redemption narrative and, in particular, at the pious platitudes of country music in Walk the Line (2005).

You might think that Crazy Heart would be at least a little bit self-aware about treading on the turf of Walk Hard. With the sole exception of the protagonist, Bad Blake, being in his later 50s, thus obviating the “rise” part of the narrative, Crazy Heart plays it straight down the line. It’s premise reminds me of what Waylon Jennings sang in 1975:

The influence of “Let’s All Help The Cowboys (Sing The Blues)” is more than hinted at in the film’s tagline, “The Harder the Life, the Sweeter the Song.”

Crazy Heart should’ve been DOA, but the casting of Jeff Bridges, who was/is, for the most part, critically bulletproof, in the lead role gave the film more than a fighting chance. Whoever decided that Bridges should play the role as the Dude—his career-defining performance in The Big Lebowski (1998)—transformed into a broken-down alcoholic country singer-songwriter had pretty much nailed what audiences would likely want to see.

And Bridges does elevate Crazy Heart, even though it’s a very safe ride, compared to the brilliant, almost indescribable, and criminally-overlooked films about the dark side of the music business, Cisco Pike (1972) and Payday (1973). Unlike these earlier films, Crazy Heart is too heavily invested in the illusion that hanging out with an alcoholic musician is a good time—I’ve played shows with a few, and, trust me, it’s far from a fun experience. That doesn’t prevent film critics, such as Roger Ebert, from gushing over how Blake can pick up almost any woman he chooses.

Okay, I get it: most of us would jump at the chance to toss back drinks and shoot the shit with Bridges. It’s not his fault, really, that he sells Crazy Heart so well—he was, after all, rewarded with an Oscar for Best Actor.

The major flaw in the film is the middle act, where he meets a music journalist, Jean Craddock, a younger divorced women with a young son. Although her character has multiple layers, they’re all tired tropes. She’s an interesting character drawn in an uninteresting way. Jean is played by Maggie Gyllenhaal, who goes all out, and was nominated for an Oscar for Best Supporting Actress. But she has the thankless task of being a muse, lover, and responsible adult all at the same time.

Here yet another 70s film reference appears, to Alice Doesn’t Live Here Anymore (1974), about a woman trying to balance her career, raising a child, and a relationship. By now, it should be apparent that there’s nothing much in Crazy Heart that we haven’t already seen before.

Even the breaking point in Blake and Jean’s relationship can be glimpsed from miles away, if we recall a scene from The Big Lebowski. Maude tells the Dude that she had a child with him, because she wanted to raise the child by herself, and he was the last person she would ever want in her life. The cold, hard truth is that men like the Dude can barely take care of themselves much less anyone else.

In Crazy Heart, once Blake fails at the task of momentarily looking after Jean’s son, the relationship is over for good. He gets sober and writes that hit song.

It’s still tempting, however, to argue for the film based on its authenticity. Crazy Heart does get every little critical thing right. For example, there’s Blake’s confrontation with the guy running sound when he’s an opening act. Blake wants his vocal levels raised, because he knows the guy is deliberately setting the levels too low. It’s common knowledge that headliners often sabotage the opening act in such a way, in order to prevent the opening act from blowing them off the stage. And, although Blake writes a hit song, he doesn’t make bank singing it himself. Instead he writes it, on spec, for a friend who’s a much more popular act than he is. In country music, the rule is that top performers sing songs written by other people.

But this argument falls right into the trap that Walk Hard so elaborately constructs: all the surface detail in the world matters little if the story being told is constructed poorly or carelessly, or both. The only ironic thing about Crazy Heart is that the film unintentionally supports this very point.

Crazy Heart also illustrates that the strength of a country song turns into a liability when making a film about country music. In a country song, a powerfully emotional story about finding love, losing it, and regretting the loss is over in a few minutes. Stretched out to two hours, such a story risks feeling overly sentimental.

One of the greatest songs in this genre, “Me and Bobby McGee” (1970), was written by Kris Kristofferson* and Fred Foster. While the version recorded by Janis Joplin, Kristofferson’s friend and lover, was a bigger hit, Kristofferson’s version hits mighty hard. At the beginning of the track, Kristofferson ad-libs, “If it sounds country, man, that’s what it is.”

I guess my real problem with Crazy Heart is that it doesn’t sound country enough.

*Nathan Rabin writes that Bad Blake “could have been inspired by about a hundred different country icons (though physically he bears an uncanny resemblance to the supremely grizzled Kris Kristofferson).” Kristofferson’s name comes up frequently in discussing 70s Western/rock music films: he had leading roles in Cisco Pike, Pat Garrett and Billy the Kid (1973), and A Star Is Born (1976). 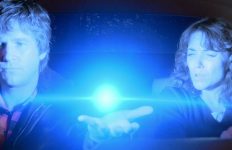 Year of the Month: Sunil Patel on STARMAN→