Nowadays, newspaper comics are the lowest form of life — page after page of crotchety old farts complaining about golf and their wives for readers to skim past on their way to the crosswords, copies of copies that have been running on autopilot longer than most of us have been alive. Occasionally masterpieces like Calvin and Hobbes and Peanuts rise above the sludge, but that’s an awful lot of sludge to rise above.

But it hadn’t always been this way. Before the World War II paper shortage shrunk the canvas, before TV leeched away the audience and comic books leeched away the talent, the funny pages were a wonderland. Instead of being crammed into little postage-stamp-sized squares, pre-war cartoonists ran wild across whole newspaper pages the size of throw rugs. And no one knew how to use that space better than Alex Raymond.

Starting out his adult life as a Wall Street clerk, Raymond had to get out fast when the bottom fell out on Black Tuesday, 1929. He took art classes and started a new career as a cartoonist, back when that was still a viable way to make a living. He bounced the studios of several established artists — he drew the crowd at Blondie’s wedding to Dagwood. In 1933, his bosses at King Features held a contest to find competitors for the biggest rival comics of the time — Dick Tracy, Tarzan, and Buck Rogers in the 25th Century. Raymond won in all three categories with Secret Agent X-9 — which teamed him up with no less a talent than Dashiell Hammet — Jungle Jim, and Flash Gordon.

That last one is mostly remembered now for his movie incarnations, first in the serials starring Buster Crabbe and then for the ‘80s epic with the Queen soundtrack (Flash, ah-ah, et cetera). But what Raymond did with his creation was something else altogether. His comics have all the campy kitsch of future interpretations (and we wouldn’t have it any other way).  But Raymond combined it with something close to high art. The story’s the same — polo player Flash meets Dale Arden, Dr. Zarkov shanghais them onto rocket ship, they end up on planet Mongo ruled by tyrannical Ming the Merciless. The planet’s full of every wonder Raymond and his successors can cook up — hawkmen, lionmen, monkey men and, in Harvey Kurtzman and Wally Wood’s Mad parody “Flesh Garden!” menmen. But Raymond transforms it into something else — which is that much more inspiring when you remember he was working for flimsy newsprint that was supposed to end up in the trash at the end of the day. (That would excuse the sloppy editing at least — one caption reference the “hawkmem.”)

In 1935, Raymond was at the height of his powers. Soon, he’d transition to the pen-and-ink technique of most comics, but for the time being, he used a paintbrush to create gorgeous, swooping arcs of ink that would take days to draw one line at a time. Maybe he wanted to give the technique one last hurrah before he moved on, because one story this year is built around it. Dr Zarkov builds an improbable contraption “for bending and destroying light” (???), making Flash visible only in the velvety lines of his shadow. As the rays wear off, his face and hands seem to swim in the darkness. 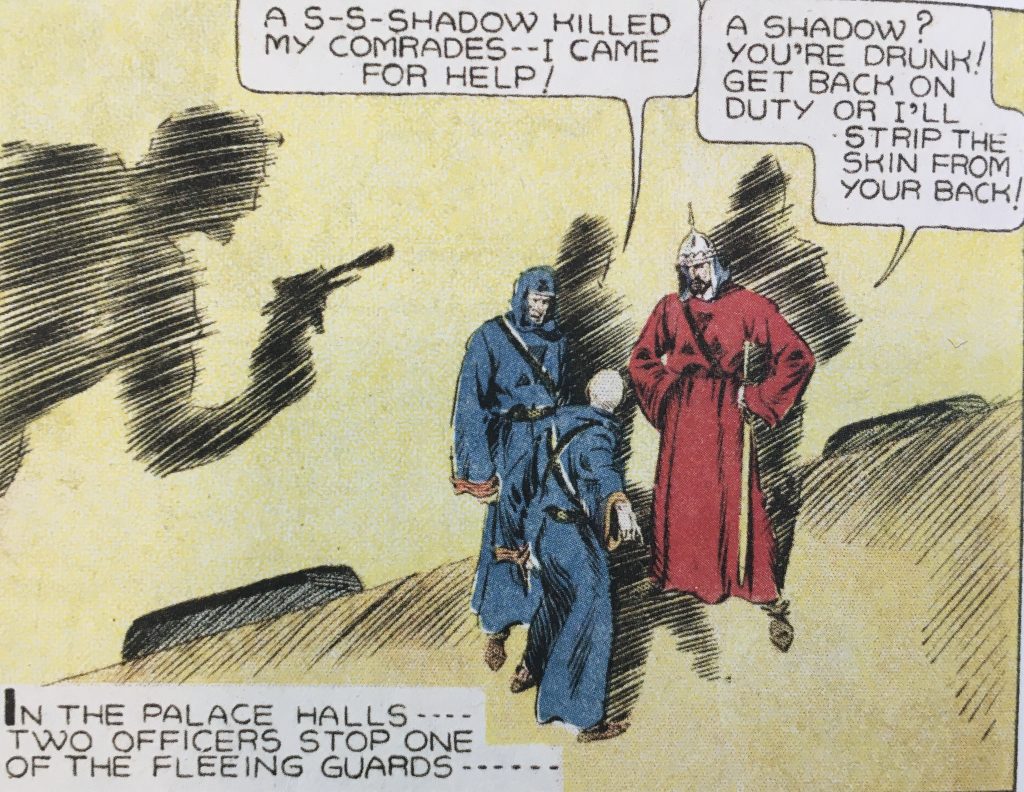 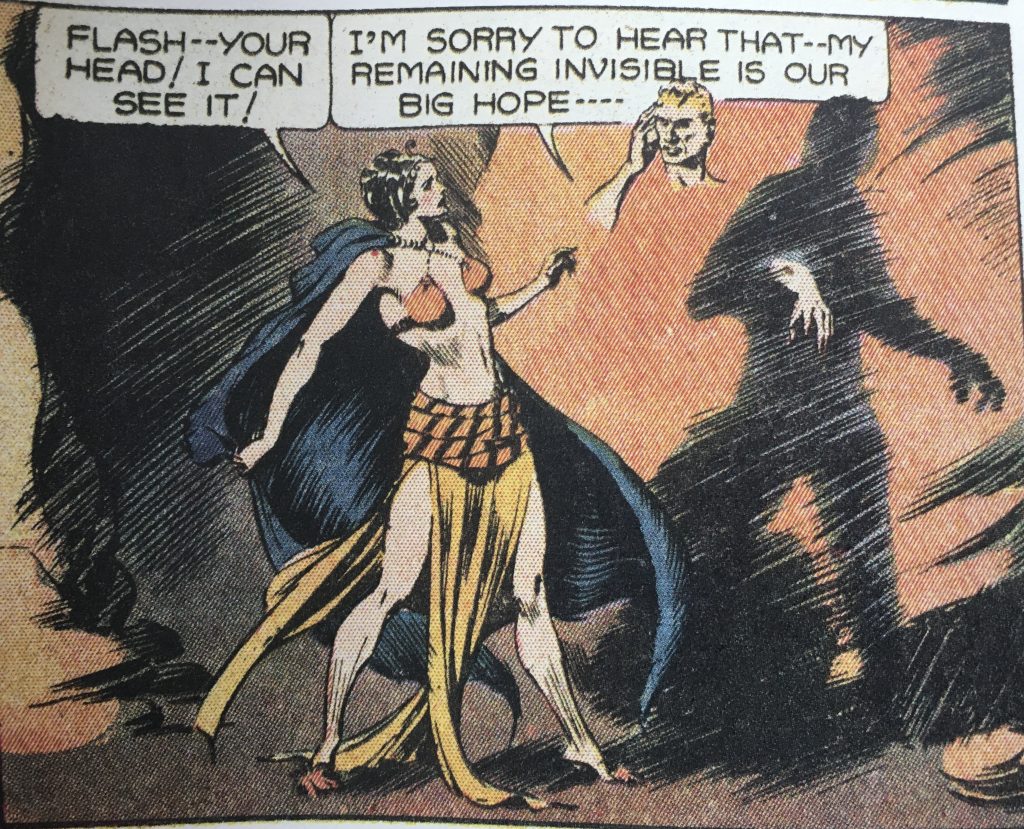 This original art shows how versatile Raymond’s brushstrokes could be — mist, shadow, and water, all at once. 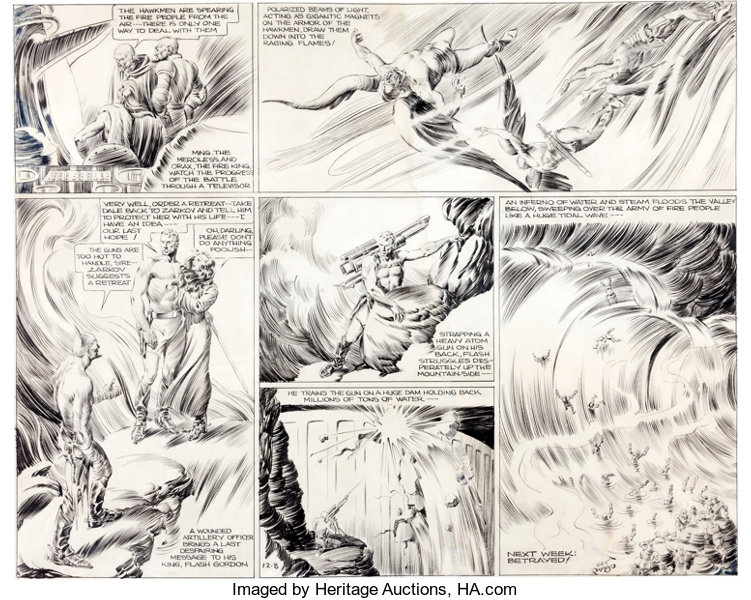 And then there’s the image that first introduced me to Raymond at age ten when I found this image in The Smithsonian Book of Newspaper Comics. At this point in his career, Raymon designed his comic so it could take up a whole or half page, and instead of stacking panels as he did every other week, he expanded them. Flanked by two tiny images of the opposing armies is in an enormous vertical panorama of the hawkmen diving, their arc echoed in the textures of the wings and the sky. 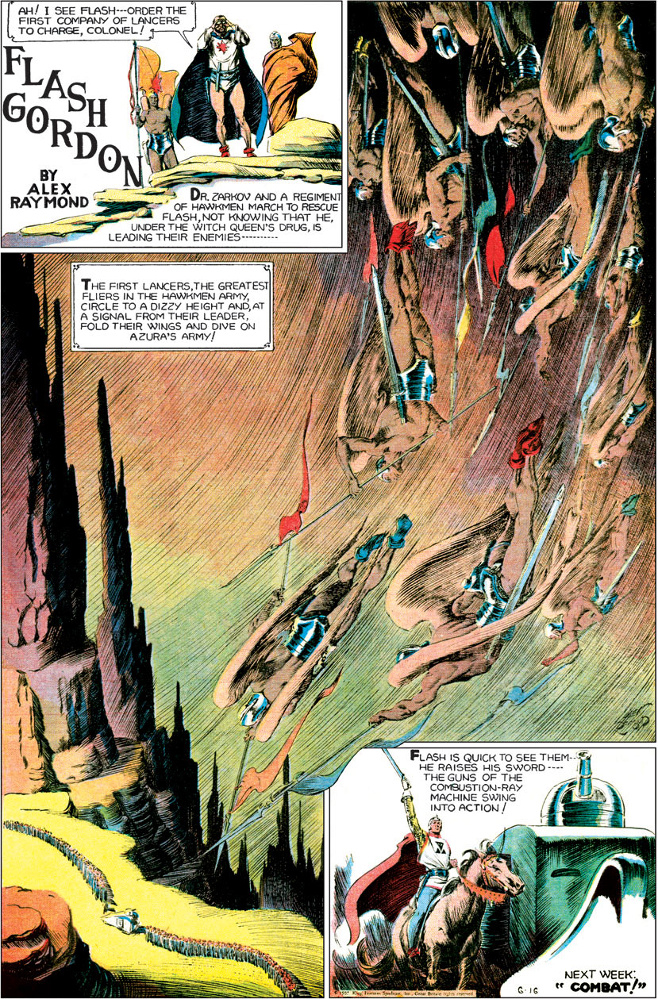 Flash Gordon is built on arcs, so dynamic and so graceful it seems to be moving right there on the page. There’s one in nearly every panel, either flames or water or bodies in motion. 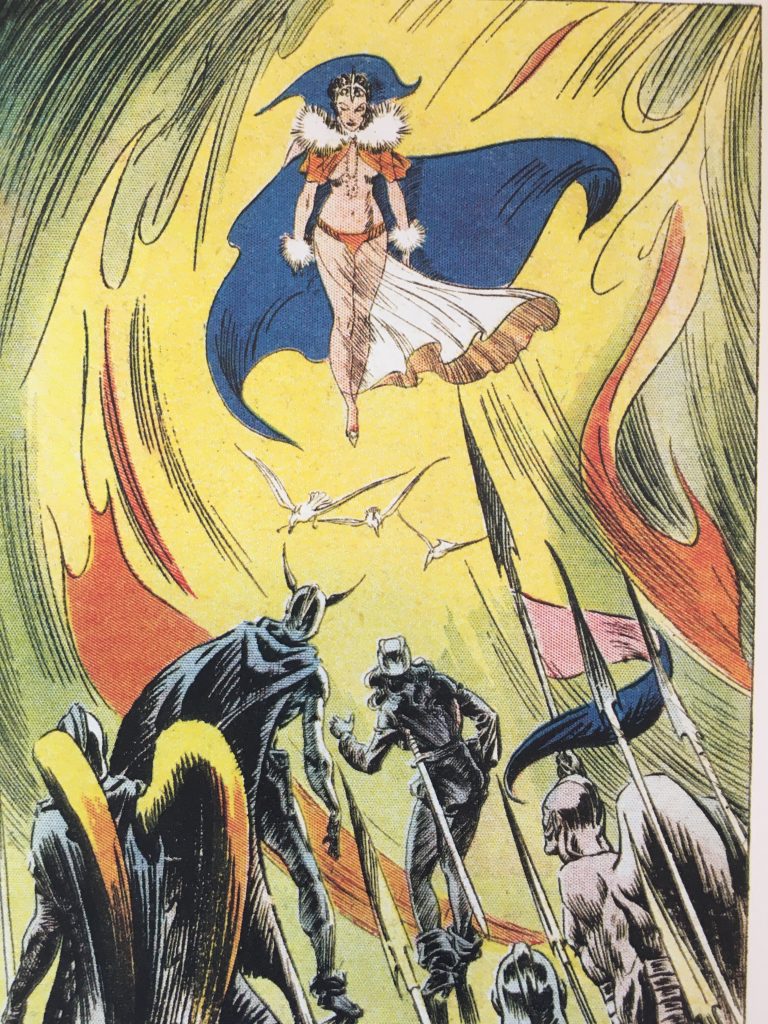 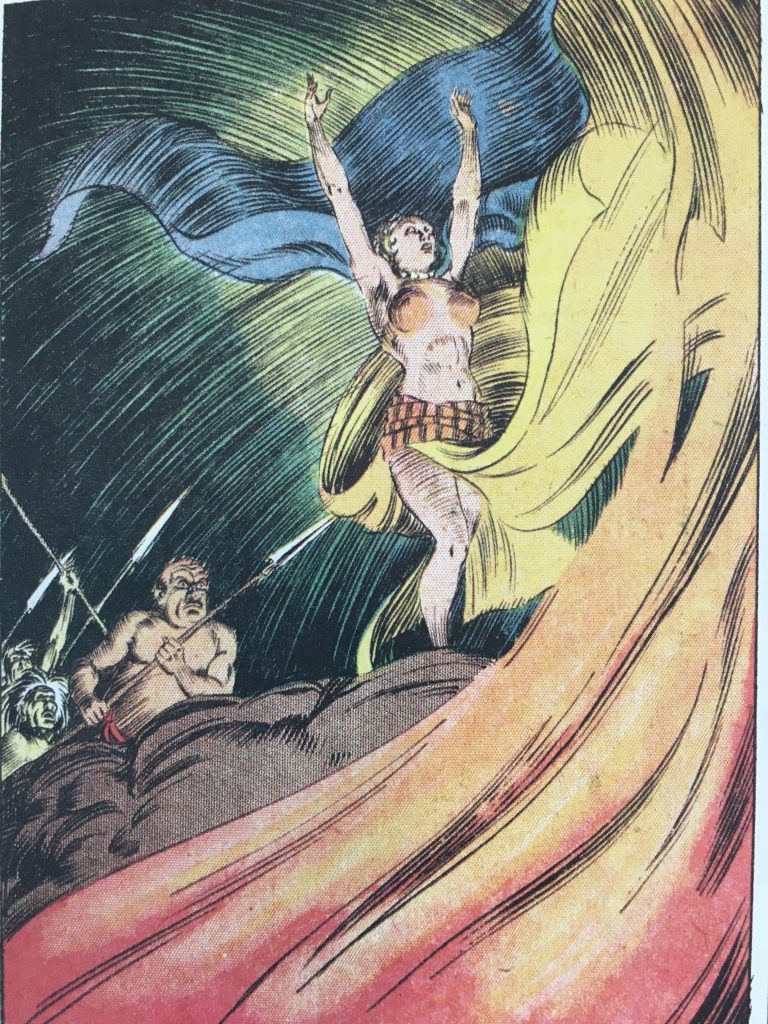 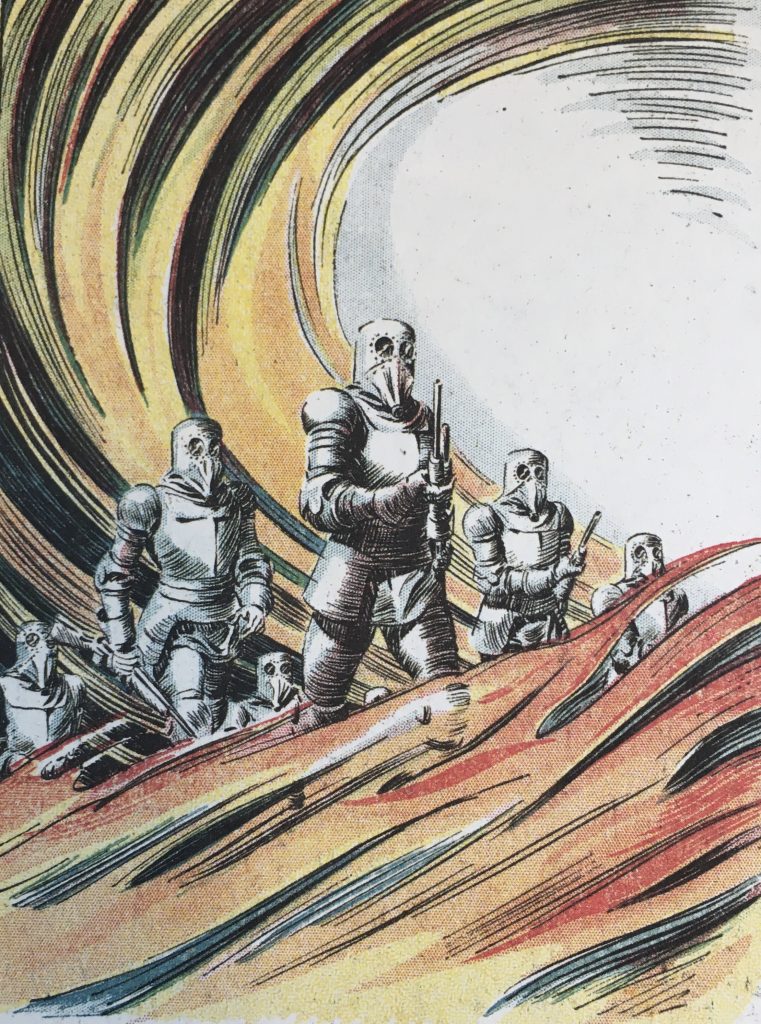 Even when the characters stand still, their clothes arc behind them as if they’ve just stopped moving or as if they’re twitching in anticipation. 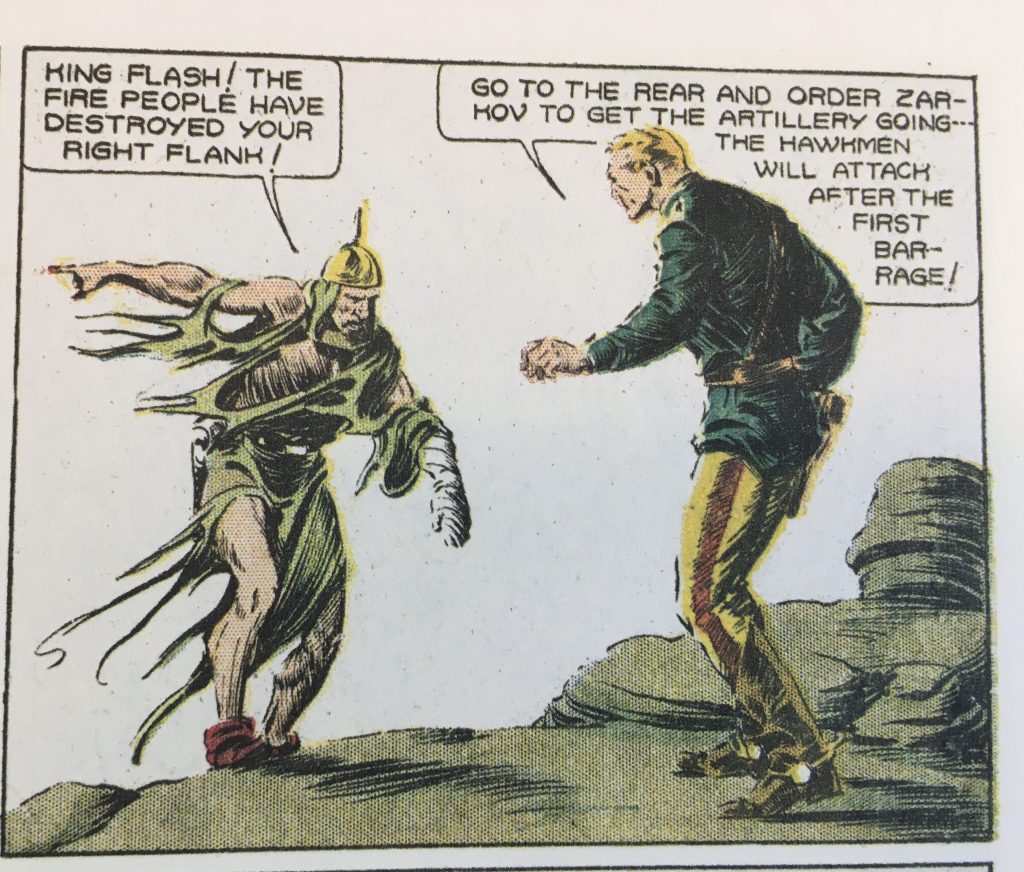 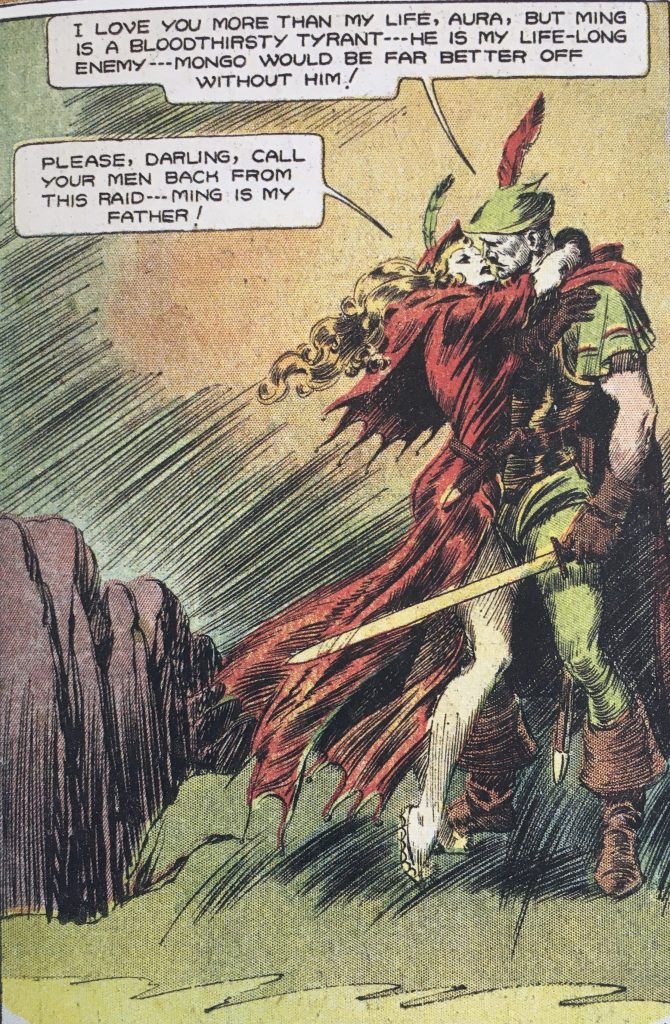 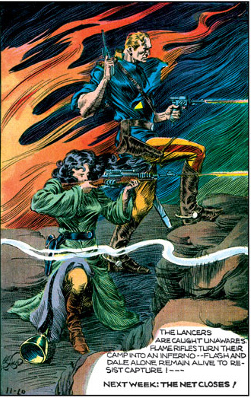 Maybe it’s also built on Raymond’s experience — unlike the stereotypical schlubby dork we imagine drawing most comics, he was as athletic as his heroes in real life. In fact, that’s what got him into college before money troubles forced him to drop out. Exaggerated as it is, it’s easy to see how Raymond drew the muscles and motion of Flash Gordon from experience. Look at this panel and tell me you don’t see the wheel and whip moving. 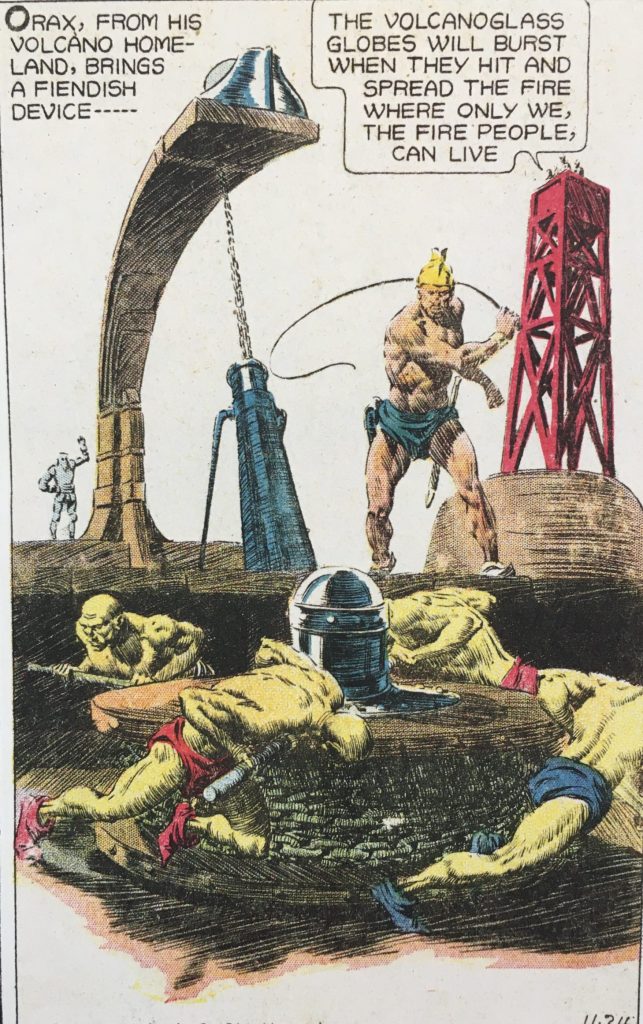 Even in its motionless moments, Flash Gordon is still dynamic. On paper, it’s hard to imagine anything more boring than this panel of some bureaucrat reading a scroll, but Raymond’s velvety shadows make it unforgettable. 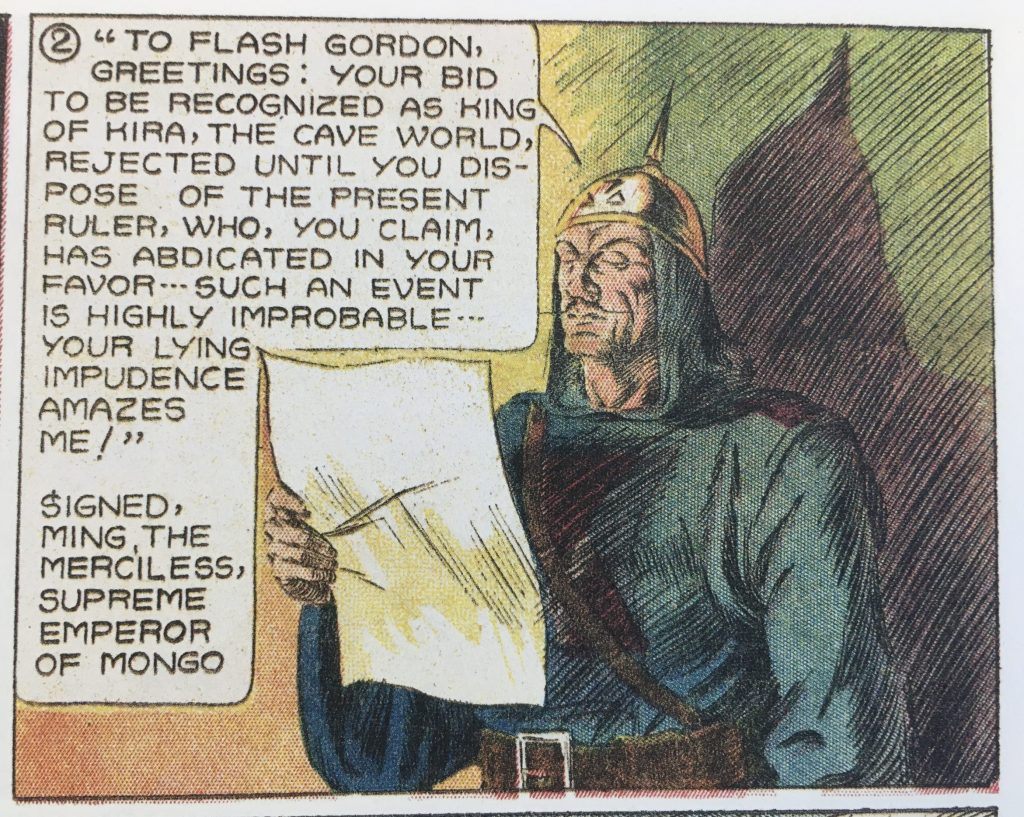 And when he gets something more promising to work with, Raymond rises to the occasion with brightly colored cannons and rockets bristling with energy any Futurist painter would kill for. 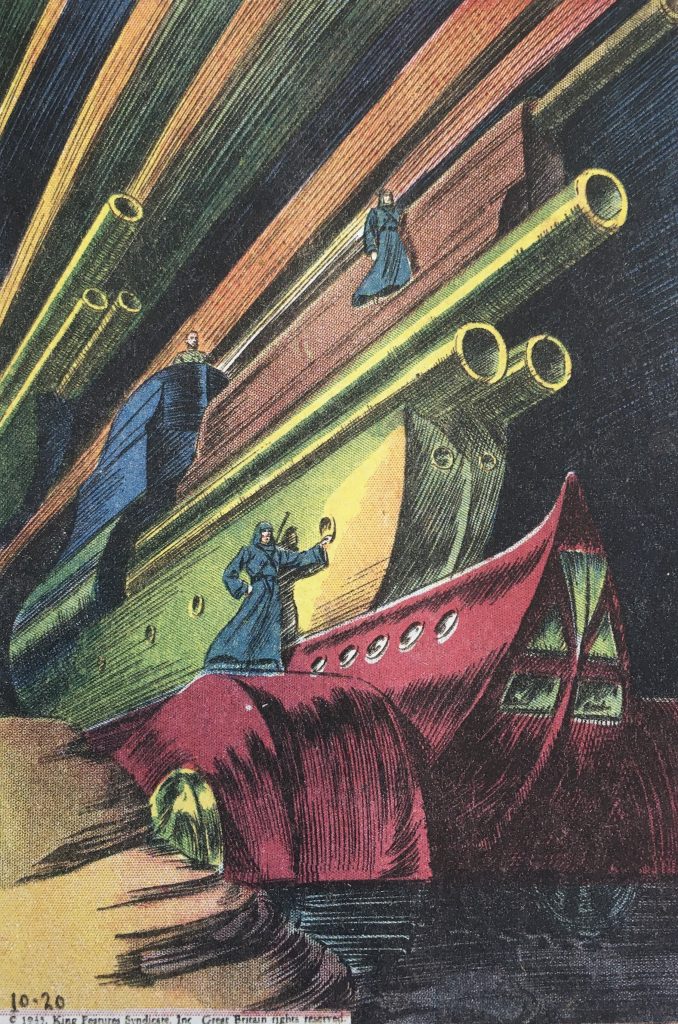 Raymond creates his palpable sense of movement by freezing his characters mid-action and often mid-air, making them both dynamic and eerily still, like insects in amber. 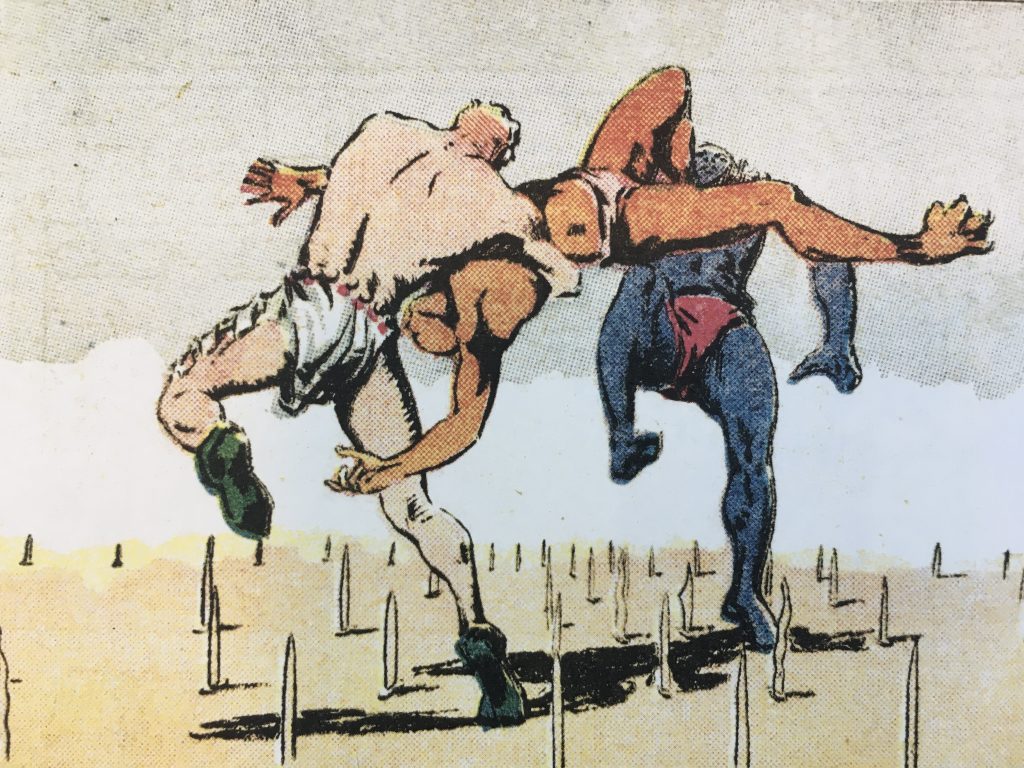 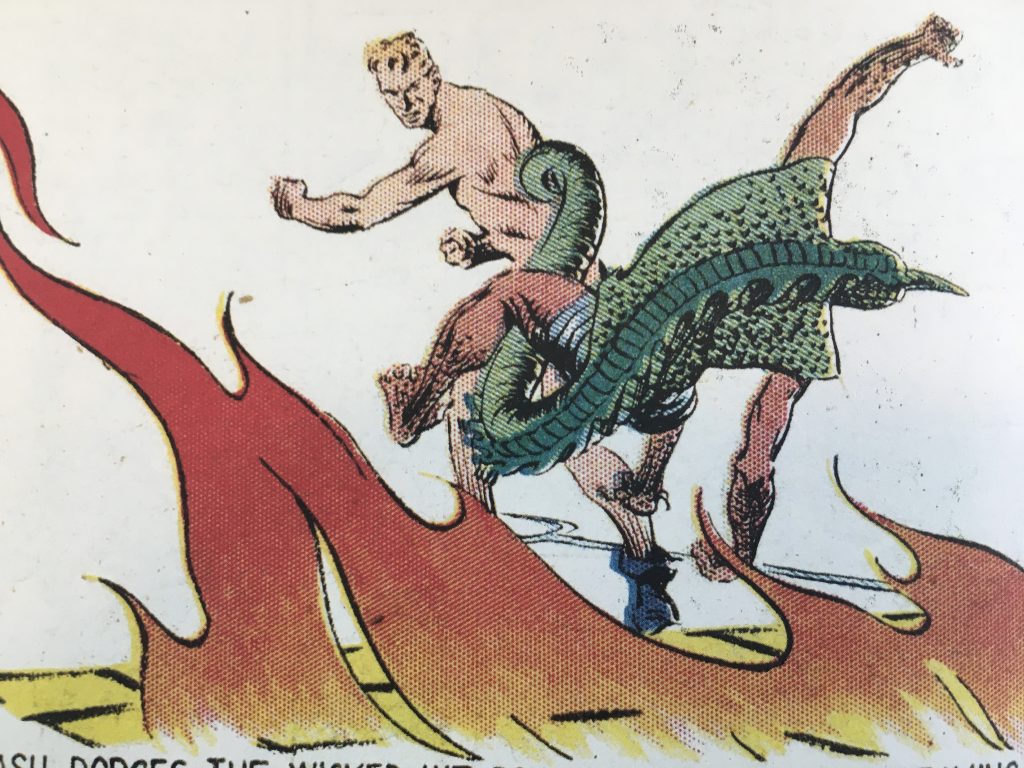 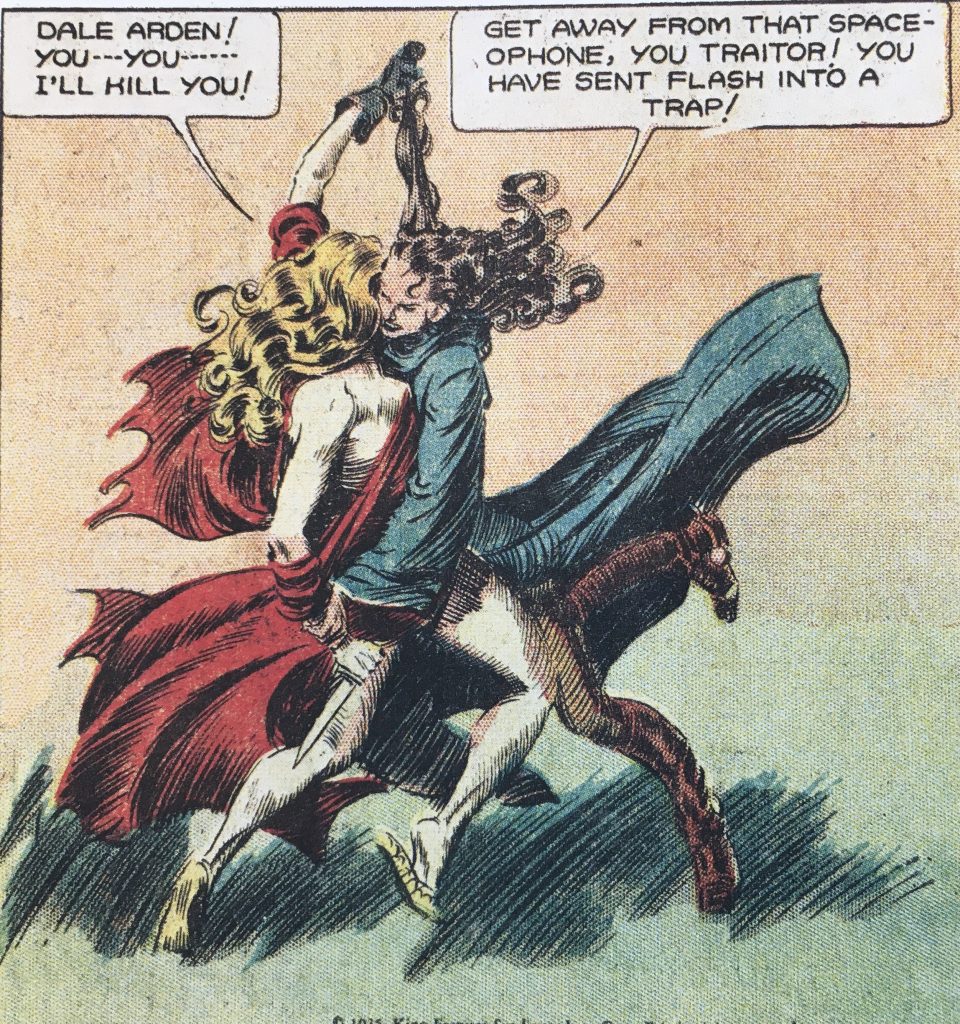 “Comics” means the union of words and pictures, and by that definition, this great comic isn’t very good at all. Raymond’s realistic figures and fluid lines owe more to “serious” illustrators than his peers, and his storytelling reflects that. He’s illustrating his narratives instead of using text and images together to tell them. Like an illustrated book, Flash Gordon often shows just one moment of the text story. Whole battles are described instead of shown.

That’s probably for the best, because Raymond’s a much better artist than he is a writer. (Pulp author Don Moore would take over scripting duties the next year, without much improvement.) But he’s not bad either. He keeps the pace as fast and thrilling as the art, and this year of comics is full of phraseology that can be poetic — “dance of the poison daggers” “black lancers” — gloriously ridiculous — “spaceograph,” “constrictosaurus” “death dwarfs” (you think they ever met Lester Bangs?)— and unexpectedly prescient — at one point, Zarkov drops “atom bombs” on Ming’s army. At the time, science fiction hadn’t settled into its current form, so Raymond looked backward to Medieval romance for inspiration. The title shows a medieval crest held by dragons with a banner reading “We sing of arms and heroes.” Characters ride into battle on unicorns (sorry, horn-horses), wearing chainmail and waving rapiers. Coming back at it after eighty years of later writers refining Raymond’s formula and removing the anachronisms, it looks fresh again — a mashup of two genres we’re no longer used to seeing together.

Like most adventure-strip artists, Raymond made up Flash Gordon as he went along. But while others turned that into a virtue with shaggy, unpredictable plots that could go on for months or years and end up a continent away from where they started, Raymond’s stuck with the single, overarching plot of Flash’s struggle with Ming that can never progress without ending the series. So there’s a lot of odd turns here. Flash begins the year sentenced to death in the arena, then wins over Ming’s vassals so much Ming’s forced to make Flash a king. Ming weasels out by making him “king” of the unconquerable underground caves so that the cave people can kill Flash for him. Putting the hero work for the villain illuminates the ugly history of colonial tyranny behind the adventure genre’s stock conquest/exploration plots, but if Raymond realized what he was doing, he’s not telling.

This means fighting Azura, witch-queen of the Magic Men, who drugs him into her amnesiac servant. She also captures Dale, leading to a moment of shocking sexual perversity Raymond somehow smuggled into family newspapers from coast to coast of Azura’s servants whipping Dale, who’s covered by nothing but a thin loincloth.

Dale and the other female characters show up Raymond’s failings the best. There’s some sub-high-school-level drama where she gets in a tiff with Flash after she saves his life and catches him honoring Azura’s final wish for a kiss goodbye, then is just as easily won back over again. And then there’s Ming’s daughter Aura, who has a will-they-won’t-they relationship with Flash and a more stable one with supporting character Prince Barin, even though she tries to murder Dale twice this year alone and sells the whole crew out to dear old dad.

Raymond may not have populated his worlds with the most three-dimensional characters, but he still populated them with every bit of invention imaginable. But his bosses didn’t know what they had. He came back from the war to discover they had no interest in giving him his creation back. Raymond still landed on his feet by creating Rip Kirby, a detective strip that gave him  a showcase for his clean, beautiful lines, cleaner and more beautiful than ever. But the earthbound series wasn’t nearly as much of a showcase for his boundless imagination. We’ll never see just how much he was capable of creating or what he would have thought of inspiring pop culture’s biggest juggernaut when George Lucas turned a rejected Flash Gordon pitch into Star Wars. He died in a car wreck when he was only 46. But his art still lives on for anyone willing to dig it out from under decades of old newsprint.