Browse: Home / Year of the Month: Jake Gittes on A SUMMER AT GRANDPA’S

If you’ve ever wondered what My Neighbor Totoro might be like in live action, perhaps the closest answer you can find among existing films is A Summer at Grandpa’s, an early breakthrough for Taiwanese director Hou Hsiao-hsien, which premiered four years earlier and has occasionally been referred to as an inspiration for Hayao Miyazaki’s animated classic. A quick search yields no direct quotes from Miyazaki himself on the matter, but the similarities between the two films are immediately apparent and widely noted: in both, two siblings (one of them a small girl aged about four or five) spend a summer in and around a house in the countryside while their mother is being treated in a hospital; both juxtapose a grand, becalmed Nature with depictions of child’s play and discovery inside an unhurried narrative built more out of overlapping incidents and storylines than a single overarching plot; both find visual and narrative use for such elements as an enormous tree and a community’s search for a child gone missing.

What A Summer at Grandpa’s, perhaps unfortunately, doesn’t happen to have is any giant friendly cat-like deities, and it’s important to note that in this case “live action” is very much analogous to “realistic,” and to real-life rhythms, layers and detail. My Neighbor Totoro, save for a brief third-act turn, is an idyllic and joyous film, looking on warmly at its little heroines’ delight at the world and treating their environment as magical even before it turns to actual magic; it’s a large part of what makes it such an enduring favorite. Hou is after something trickier and more ambivalent: approximating children’s view and experience of the world that is lived, and shaped, not only by themselves but by surrounding adults with their adult problems, and as such can feel casually strange, disturbing and threatening as well as fun and blissful. A telling distinction between the two films’ sensibilities is found early on: here, the fact of Mom’s illness is revealed immediately rather than strategically withheld (and we hear news of specific complications she’s suffering from throughout the film) and casts a shadow over the kids’ holiday before it even begins. 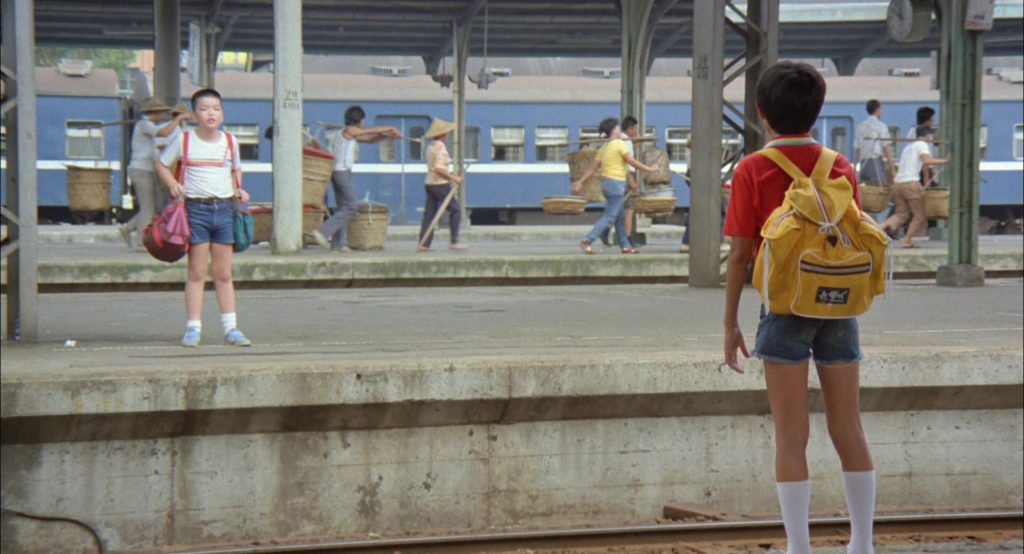 The subsequent train trip from Taipei to the countryside already ends up involving the kinds of crises that are ultimately inconsequential yet can feel all-encompassing at the moment people are going through them (here, the film knows it can draw on embarrassing memories of each individual viewer for identification): little Ting-ting discloses that she needs to pee just before departure, and can’t do so while the train is moving, which leads to her sullying her dress and having to be changed right in the carriage; later, the kids’ ne’er-do-well young uncle, Chang-ming, entrusted with delivering them to their destination, doesn’t make it back to the train in time during a stop, which leaves them stranded at their station as they wait for him to catch up. All ends well: the kids never panic and don’t find themselves in trouble, and Chang-ming, in his relief at seeing that they didn’t decide to show up at the house alone, says that his father would kill him if they had, which sounds like familiar exaggerated talk — but then again, Grandpa does turn out to be a tough, reticent, stare-you-down-silently type; his first reaction to something Chang-ming does later being to chase him around with a crowbar.

While waiting outside the station, Tung-tung, the older of the siblings, befriends a gaggle of bored local kids hanging around nearby and exchanges his impressive RC car for a live turtle, which prompts leaps of endearing child-logic that the film dutifully observes to the end: the next time Tung-tung meets his new friends, every one of them has brought a turtle to trade for a toy — and when the boy admits that he only has one of the latter on him, the obvious solution is to have an impromptu turtle race, and “whoever’s turtle is the fastest gets to trade!” which all goes about as smoothly as you’d expect. Moving on to further interactions between the kids, Hou and his regular co-writer Chu Tien-wen (on whose childhood memories the film was based) capture forms of hurt and vindictiveness that can enter into them: while all the boys are swimming and playing in a stream, Ting-ting, who resents not being accepted as a playmate, throws all their clothes in the water, forcing them to run home butt-naked. 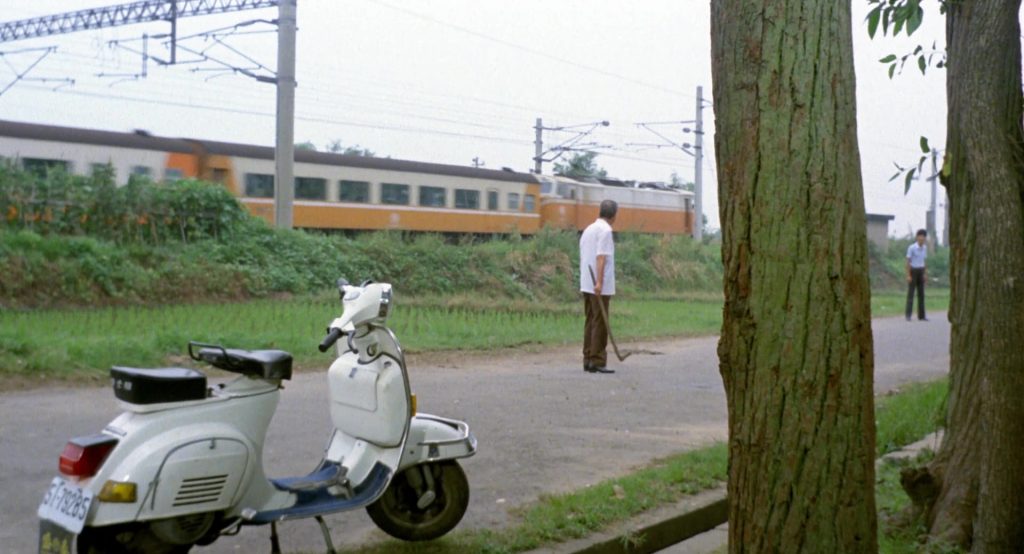 The adults have their own stress and aggression they bring on each other and themselves. The main grown-up dramas that take place partly in, partly out of children’s sight are a violent robbery in an underpass and its fallout, and not one but two unplanned pregnancies, which both call for tense conferences that involve Grandpa and his family. One leads to a hasty marriage, officiated by a judge who intones on autopilot, “Families are building rocks of a nation…Our ancestors told us: the order of the world starts from the order of a family”— and meanwhile, no adult family from the groom’s side is present, and both newlyweds, in their everyday clothes, stand there like deer in headlights, still a couple of kids themselves for all intents and purposes. Tung-tung, present at the ceremony, doesn’t yet consciously understand the ironies, his main takeaway being that the bride “didn’t look as pretty as Mom in Mom’s wedding album”. The film, for its part, sees all.

This sequence may be the purest example in A Summer at Grandpa’s of Hou applying the same principle to narrative that he consistently brings to his images, which tend to be captured from a master-shot distance and are consciously “deep”: inside, the action is often seen through doors, outside (where most of the film takes place) the frame stares down streets and roads and/or gets broken into parallel lines, incorporating a variety of left-right, foreground-background human activity. The director’s detached, implacable style has earned him a reputation as being difficult, or at least demanding; some of his best-known and most acclaimed works, like the sprawling A City of Sadness, the hermetic Flowers of Shanghai, and, most recently, the Cannes-winning The Assassin, are known for being willfully opaque and/or dense. In A Summer at Grandpa’s, however, his reserved sensibility stands in productive counterpoint to both the visible and unspoken joys and turmoils of children’s and adult life; it provides a bracing emotional clarity, much like it would in Hou’s later triumph of a family drama, 2007’s Musée d’Orsay-commissioned, Paris-set Flight of the Red Balloon, starring a particularly live-wire Juliette Binoche. 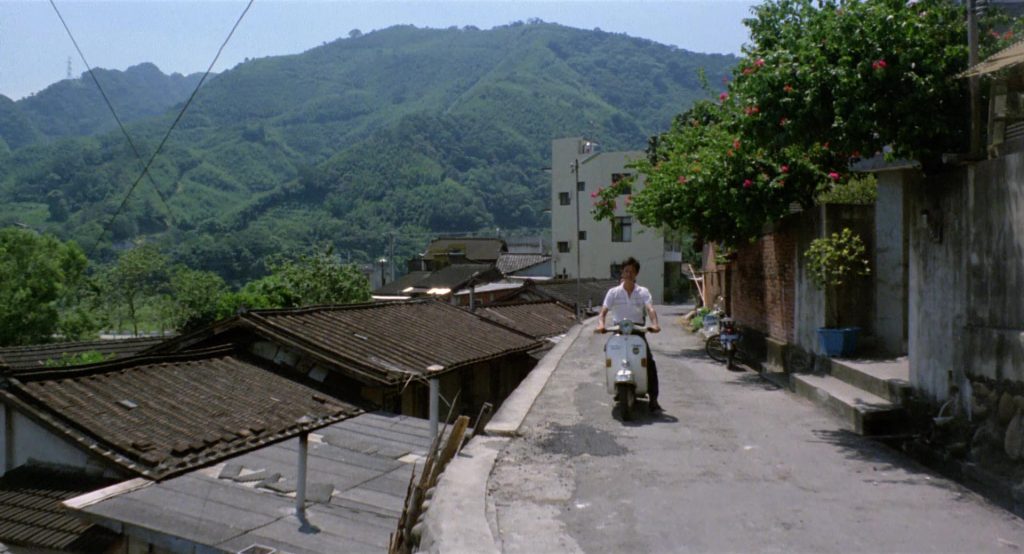 It works because it’s all-absorbing, taking in various elements and interactions and contemplating their possibilities, thus, e.g. the continuous rumbling of trains on- and offscreen carries a soothing quality — adding to the peaceful pastoral vibes — yet we also get a jaw-dropping moment where a character is saved from being hit by one with just seconds to go, with the film itself never breaking its composure. This way, it becomes capable of achieving a sense of serenity without romanticizing what it depicts, and of occasionally being as pitiless as any movie without ever turning cruel or even especially downbeat. The combination of unshakable style and troubling, anxious goings-on underneath ultimately reflects both Nature, placid and majestic from a distance but dangerous up close, and the childhood experience of moving unselfconsciously through life without fully understanding what everything means or realizing that any random moment could end up permanently imprinted on your mind. A few years later, these kids may well become like the teenage schoolgirl in the opening scene, delivering a thank-you graduation speech where her description of education sounds increasingly inseparable from growing up itself (“Everything to me was so fresh and interesting…What’s left are the memories and the reluctance to leave…We are striding into a new journey, towards more knowledge…”); and still years after that, perhaps, they may just become mature and wise enough regarding the whole thing to make a film like this about it.

Year of the Month: EYES WITHOUT A FACE→