Browse: Home / Year of the Month: Under the Influence of Cassavetes – MARGOT AT THE WEDDING

With the news that John Cassavetes’s Husbands (perhaps my all-time favorite film) is getting the Criterion treatment in a few months, now all of his most important films, Faces (1968), Husbands (1970), A Woman Under The Influence (1974), Opening Night (1977), and Love Streams (1984), will have been released in Criterion editions. Cassavetes’s influence has been felt lately: the Safdie brothers and Barry Jenkins have openly stated their allegiance.

To trace Cassavetes’s influence back further warrants looking at Margot At The Wedding. It stands out for its unusual lineup (for Hollywood) of two outstanding female leads, Nicole Kidman and Jennifer Jason Leigh. Kidman is a narcissistic writer who sabotages the wedding of Leigh and Jack Black, cast as a semi-charismatic misfit/fuckup.

Scott Tobias, in The A.V. Club, suggests that Margot At The Wedding “has a kitchen-sink realism that’s genuinely unsettling, like a John Cassavetes movie populated by the hyper-articulate.” In addition to being “hyper-articulate,” the film departs in other ways from the Cassavetes modus operandi: Cassavetes was notoriously adverse to working with a star of Kidman’s stature, and he never would have green-lighted the tony setting of the Hamptons.

But like Cassavetes, writer/director Noah Baumbach is out to smash clichés left and right. Following up on the success of The Squid and the Whale (which I found overly precious), Baumbach treats the Hamptons as distinctly unglamorous—Harris Savides’s cinematography imparts a washed-out look—having the association with a soured nostalgia. And, evoking Cassavetes, Baumbach sets the stage for a collaborative acting out of bruised feelings that lets John Turturro, in what only seems like a minor role as a fellow writer, to nearly steal the show.

We open on a train—a paradigmatic setting for a 70s road movie. Margot (Kidman), who can impulsively turn on a dime, is with her son, Claude. They’re going to the wedding of her estranged sister, Pauline (Leigh). The groom, Malcolm (Black), picks them up at the station. He tells them that he’s cool about the wedding; seconds later he blows up at a driver trying to turn in front of him: almost none of the adults, as we will see, tend to ever say what they’re feeling, only what they think will help to get what they want.

In her manipulative arts, Pauline is the mirror opposite of her sister. Margot is a cold chisel, while Pauline is a warm sunbeam that can melt the toughest defense. They share, however, an insecurity instilled in them from growing up with an abusive father. To cope, Margot has become a devotee of pot and wine; Pauline has turned to self-help books/seminars and prescription pills.

Margot, as might be expected, immediately starts to pick apart Malcolm’s numerous flaws, which are not hard to miss, especially a troubling lack of maturity. For Margot, this begins as merely an amusement; the real purpose of her visit is to hook up with an equally narcissistic writer living nearby. When, in a moment of what appears to be questionable judgment, Pauline tells Margot—before anyone else—that she’s pregnant and that Malcolm’s the father, that’s all the incentive Margot needs to escalate her offensive against Malcolm.

If we can look away from Margot’s antics, which Kidman does make tough to do, we observe the drama brewing between Pauline and Malcolm. His exasperated response to her question, “Did you drink your teas?”, speaks more about the frenetic state of their union (owing to Black’s perfect line reading) than pages of dialogue. Yet Black, adeptly trading on his comic persona, gives Malcolm a teddy-bear charm calculated to win over the sort of unmoored cosmic dreamer that Pauline is.

The passive-aggressive battle between Margot and Pauline is interrupted when Jim (Turturro), Margot’s husband and Claude’s father, shows up. We peg him as the outsider at the gathering (even Pauline’s psychotic neighbors fit in), because he’s genuinely empathetic. Turturro, as much as Kidman or Leigh, slips into his character, a writing teacher (his own fiction doesn’t earn enough) on solid terms with his son, but unable to have the same rapport with his wife.

Jim and Margot’s already strained relationship takes a body blow after Jim, very much against Margot’s wishes, rescues and pays for the emergency medical care of a stranger’s dog. When he assures her that she would’ve done the same thing, Margot, gripped by stoner paranoia, unloads on him. This confrontation, which Tobias calls “ugliness…raw and unvarnished,” makes us think that Malcolm is right to have warned Pauline about the threat Margot poses to their relationship.

Except it turns out that Margot is right about Malcolm. He gets caught doing something that would be even more of a deal breaker now than in 2007. Everyone flees to a seaside hotel; their trip by ferry (paralleling Margot and Claude’s arrival) is accompanied by the sonic implosion of Fleetwood Mac’s “That’s All For Everyone.” Malcolm remains in exile at the house.

Although it feels freeing to be out of the claustrophobic setting of the house and its grounds, the hotel’s dinginess becomes just as oppressive. Margot tries unsuccessfully to get Pauline to come with her and Claude to see Jim, for the purpose, we suppose, of double-teaming him.

Then we get to what, for me, is the most Cassavetes-like scene. In the background of the hotel bar, a karaoke singer performs, with the barest competency, the classic 70s downer love song, “On and On.” During a phone conversation (we can hear both sides) in the foreground of the bar, Malcolm and Pauline start to play damage-control. But the mood shifts when Pauline is genuinely moved—Leigh’s facial gestures and vocal cadence depict the unsure awareness of someone else’s distress—as Malcolm’s confession breaks down into uncontrollable sobbing.

Baumbach has yet to make a film as challenging in its emotional messiness as this one. Compared with the ice and fire dynamic of Margot At The Wedding, Marriage Story (2019), critically lauded as his latest achievement, feels like lukewarm water. 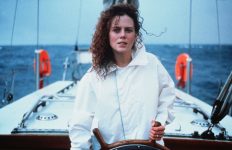 Film on the Internet: DEAD CALM→