King Kong was far from the last attempt to jump on the Jaws bandwagon. Columbia thought they’d cracked the code by adapting another novel from Jaws author Peter Benchley and casting Captain Quint himself, Robert Shaw, to make The Deep. They even ripped off the iconic Jaws poster with a woman, instead of a shark, swimming up to the surface. 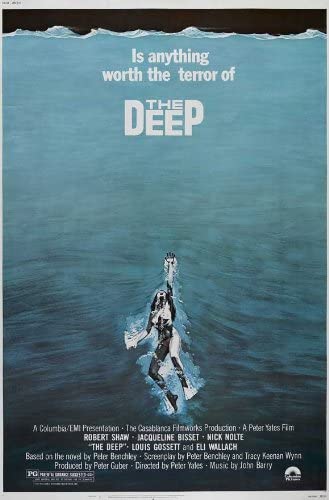 But Benchley was never the reason Jaws worked, and The Deep makes it painfully obvious why. It seems to be made out of all of the sex and crime Spielberg wisely cut from Jaws, with a plot about a couple who discover sunken treasure and have to fight Haitian gangsters for it — even if, for some reason, they’re only interested in the bottles of morphine and not the priceless historical artifacts. Shit, even the bottles are probably worth more than the morphine inside.

As for the sex, The Deep is a reminder of the sleazy, pre-Star Wars world of genre film, where some kind of sexual violence is always either taking place or just about to. The gangsters force New Wave star Jacqueline Bisset to strip and later break into her apartment so they can hold her down on the bed and paint red voodoo symbols on her near-naked body. A lot of ink has been spilled about how Star Wars de-sexed the movies, but if this is the alternative, I’ll take the sexlessness, thanks. And that’s without even getting into the fraught racial politics, and there’s a lot of that with its white-tourists-vs.”savage”-Haitian-villains plot. Worse, the action itself is almost perversely inert, playing out in dull silence that really makes you appreciate how John Williams goosed the Star Wars setpieces.

Apparently, Hollywood decided Jaws took off not because of Spielberg’s craftsmanship with thrills, but because of the underwater scenes. At least, that’s the impression you get from Airport ‘77. Before Airplane! killed the series for good, the Airport movies were the hot ticket in Hollywood, and this one tries to liven up the formula by trying to get a plane out of the water instead of the air. You’d think the filmmakers would be concerned the title would date it, but since one scene prominently features a game of Pong, it’s hard to imagine they cared.

Before Star Wars, stars got asses in seats better than special effects, and Airport ‘77 has a whole daytime variety show’s worth, most of whom would be above this kind of crap if their glory days weren’t several decades behind them. There were enough of these kind of star-studded disaster movies to get an entry in Roger Ebert’s Little Movie Glossary: “Box Rule: Useful rule-of-thumb about movie advertisements that have a row of little boxes across the bottom, each one showing the face of a different international star and the name of a character (e.g., ‘Curt Jurgens as the Commandant’). The rule is: Automatically avoid such films.”

This one includes Olivia De Havilland, Joseph Cotten, Christopher Lee, a great actor despite starring almost exclusively in terrible movies; Jack Lemmon, who seems to be doing a bad impression of himself in his introductory scene; and Jimmy Stewart, the ultimate folksy everyman, inexplicably cast as a multimillionaire. They don’t get much to do except scream a lot, but to their credit, they’re so bad at it they’re occasionally good for a laugh.

Before Star Wars, the biggest franchise in the movies was James Bond, but even that one couldn’t resist ripping off Jaws. Not only does The Spy Who Loved Me mostly take place on and under the water, with Q giving Bond a submarine car (which makes more sense when you remember Ian Fleming also wrote Chitty Chitty Bang Bang). It also has a bad guy who feeds people to sharks and a major character literally named Jaws.

I was shocked to discover this was the best-loved of the Roger Moore Bonds, which just confirms my decision not to seek out the rest of them. It could just be because Bond fans like to see their hero treated as Serious Business and this one doesn’t embarrass him as much as some of the others. But some embarrassment would have at least livened things up. (It does have one memorably ridiculous moment when we learn that MI6 somehow has a secret base inside an ancient Egyptian tomb.) The grainy, beige world of ‘70s filmmaking is kryptonite to the glamour a good Bond movie needs, and the disco score doesn’t help any.

And then there’s Moore himself, who never seems to get any lines except limp one-liners. When the folks at Eon phased out Sean Connery, they inexplicably decided to replace him with someone even older than him. By ‘77, Moore was turning fifty, and it shows. Most of the action sequences are just him and his enemies pretending to throw each other around by kind of nonchalantly ambling into walls.

At least it has one killer stunt at the beginning when some skiing goons chase Bond off a mountain and he jumps off an extremely high cliff for an excruciatingly long time before his parachute opens. Eon obviously knew what they had there, because the stuntman gets his own line in the opening credits.

The best original songs of 1977, according to the Academy (Year of the Month)→