Director Wes Anderson’s The Grand Budapest Hotel is a madcap series of adventures of Monsieur Gustav H; the legendary concierge at the mountain top hotel and his eternally devoted Lobby Boy and best friend, Zero Moustafa.

The film is a Russian nesting doll of stories, its opening frames ostensibly taking place in modern day, where a young girl pays respects to a brass statue of the author of the Grand Budapest Hotel memoir– only to quickly leap backwards and have the author himself (Tom Wilkinson) introduce us to how his book was inspired. He remembers being young and resembling Jude Law and meeting the mysterious and quiet owner of the Grand Budapest Hotel, Zero Mustafa (F. Murray Abraham). Zero invites the young Author to dinner to tell stories of his mentor and friend, the hotels greatest and most legendary concierge, Gustave H. The film jumps further back in time to the 1930’s, introducing us a younger Zero played wonderfully by Tony Revolori and the moment he meets Gustave, a top of his game Ralph Fiennes. Gustave H. is suave, coolly sophisticated Lothorio of high class and expensive cologne. I’m biting my lip at the thought of writing the phrase: ‘Not since Schindler’s List…’, but damn-—I don’t recall Fiennes being as concentrated and soaring at such a level as he does between these roles.

When we meet Gustave, he’s in the midst of courting Madame D (Tilda Swenton), one in a series of his old, wealthy dowager clients. After Gustave receives news of the woman’s death, he crashes the reading of her will and discovers she has bequeathed him an expensive painting, Boy With Apple. With the dedicated help of Zero, Gustave makes off with the painting despite the seething anger of Madam D’s son, Dmitri (Adrien Brody). For the painting and the mystery surrounding the old woman’s passing, Gustave is arrested and imprisoned. Zero helps Gustave escape by sending him tools baked within cakes made by Zero’s equally dedicated girlfriend Agatha (Saoirse Ronan). As Zero helps Gustave prove his innocence, they’re both pursued by an assassin (Willem Dafoe) hired by Dmitri. All this while the outbreak of war hangs over the entire proceedings.

As a director Wes Anderson embroiders his frames as an artist does with a graphic novels. His camera a kind of Exacto-knife, dollying or panning over spaces so richly detailed they’d give Stanley Kubrick a toothache. For Anderson, art direction and set design are equal co-stars and the enriched inventiveness of the film makes it pop visually with detail usually reserved for a children’s film. That makes the Grand Budapest greatly rewarding on re-watch. Anderson sometimes earns laughs just in showing how a character occupies a room. When his camera zooms its to crop the image without distraction. One gets the idea Anderson spends as much time designing the ticking on doilies hanging in the background as he does writing poetic dialogue. Character monologues and exchanges often sound as if written in cursive. One could spend the entire movie just watching the parade of facial hair from Lobby Boy Zero’s wax pencil moustache to Madam D’s lawyer’s (Jeff Goldblum) pi—shaped goatee. Other critics use the word ‘confectionery’ in writing about the film’s look and noted how the hotel pops out of its mountain top address like a birthday cake— but everything in the film looks sugary sweet; Tilda Swinton’s Madam D character is old, but her hair and skin appear whipped and frosted.

The Grand Budapest Hotel is Anderson at his most playful and its a perfect intersection of actors and the director’s vision. As a film, it would be described zany or madcap if the performers played any of their embroidered dialogue less than genuine. Fiennes is heroic here as a comedic lead, playing every character beat as cooly sophisticated and thoughtful, even as circumstances and plot shifts aim to humiliate him.

Anderson is a unique visionary. Kubrick’s name might occur while watching Grand Budapest, what with its art gallery wide shots and generous reds, but there’s no one else who makes films with Anderson’s OCD level of attention to detail. The word twee occurred to me watching this, in regards to Anderson’s directorial eye and writers voice. But it feels cruelly dismissive here. Here’s a film like a excited puppy with a embroidered ribbon around its neck. Impossibly adorable and cuddly.

Film on the Internet: THE LIFE AQUATIC WITH STEVE ZISSOU→ 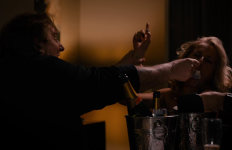 Not Available in the US: WELCOME TO NEW YORK (Uncut)→ 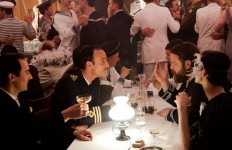 Film on the Internet: THE CIRCLE on Netflix→