Mumblecore.  The term for me has a mixed connotation. It has overtones of “hardcore”—pushing the envelope, swimming against the current (etc.)—while at the same time being liable, like any radical artistic impulse, to being commercially co-opted and exploited (see “alternative music”).  It also suggests a self-denigration (the opposite of speaking out) expressed as a preemptive defense against the judgment of the market.

That it can mean different things that don’t exactly fit together is perhaps why the term has stuck.  Certainly its low/micro-budget aesthetic—owing a fair amount to the groundbreaking films of John Cassavetes, who missed few opportunities, when he could, to work outside of the Hollywood studio system—is a defiant counter strategy to the continuously escalating budgets, one-size-fits-all characters, and stick-out-like-a-sore-thumb plot points of global blockbusters.

In 2007, film critic Amy Taubin stated that mumblecore (referencing Warhol) had by then its 15 minutes of fame.  She pointed out, notably, what the movement did not successfully accomplish: take control out of the hands of white male filmmakers.  The verisimilitude of setting, when repeated enough, of the post-college upper/middle-class world, suggested a lack of imagination, made all the more glaring by the refusal to substantially address the changes forced by globalization.

A little after five years having passed since Taubin’s pronouncement would seem an ideal time to reexamine films that were categorized as mumblecore.  We will first look at the film that started the movement.

If there’s one thing that Hollywood films are really good at doing, it’s putting us in the right place at the right time.  We tend to never forget how privileged we are as spectators: always having a front row seat, or, at the very least, an unobstructed view of whatever the central event is in the film.  Now, if for whatever reason, our view is obscured, it creates a critical distance—some films play around with this idea to make our viewing experience more complex.

But it is a rare film indeed that has the crucial event occur off screen, out of our view altogether.  This is a principle trait of Andrew Bujalski’s filmmaking, and it works to utter perfection in Funny Ha Ha.  The central event is the sudden and unexplained wedding of Alex, whom Marnie, the female protagonist, is friends with but has been trying to make their friendship something more.  The news of the wedding, which Marnie hears from Alex’s male co-workers, shakes her up.  In a further insightful touch, Bujalski turns the camera to focus on a female co-worker, who cryptically says she is not at all surprised by the news, yet goes no further in providing an explanation,  again reminding us that we don’t, and can’t, know everything about Alex.

While Marnie has been able to bounce back from previous setbacks, all of which we have seen, this hurts more—as if the randomness of the post-college world she is trying to navigate has become even more frustrating, even more involved with the messiness of conflicting desires.

Why this non-scene works so well is because we are forced to identify with Marnie’s confusion which emotionally roams all over the place: from funny to funny ha ha.  We, after all, have no knowledge of/about the wedding that she doesn’t have.  Thus we do not have the illusion we might respond differently than Marnie, because we are not placed beyond what she experiences.  But we do know the wedding is the central event in the film, because of the way it occurs in the middle of the story.

Marnie is a bit of a dreamer who tries to live in the moment.  However, the film reminds us this is harder to pull off than it looks.  Unlike Hollywood films that play on our fantasy of getting what we want if we just have the right intentions, Bujalski allies himself with Cassavetes in challenging this fantasy.  Early in Funny Ha Ha, we watch Marnie choose exactly the wrong guy to romantically engage with: he is polite, but cold.  This is why, comparatively, Alex seems a reasonable possibility, even if his joking around with Marnie is hard to read (a sign of confidence or insecurity—or both?), because unlike a comedian his sense of timing is idiosyncratic.  He does, in a classic case of compensation, arrange for Marnie to get a job as a research assistant for his uncle, a college professor. 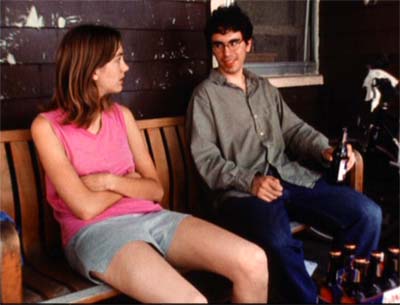 And in the second half of the film (after the news of the wedding), we feel the relative absence of Alex, as Marnie gets pulled into the orbit of a much greater asshole.  Played brilliantly by Bujalski, Mitchell works at a place where Marnie did a brief stint, and tries to initiate a relationship with her.  Bujalski pulls off the feat of making the character feel so sorry for himself, we don’t want to.  Thus we can see how dangerous he really is, a prototype of the “nice guy” whose resentment at Marnie, whom he sees as somehow fortunate (which the film keeps showing us is certainly not the case) shifts his passive-aggressiveness into aggression.

Therefore one way the film deals with the insularity of its subject matter (as Taubin, among others, have leveled this charge against the mumblecore genre) is to show how it is a major cause of dissatisfaction in Marnie’s life.  For example, there is the boyfriend of one of her best friends, who takes the opportunity, seemingly the minute his girlfriend is safely out of view, to hit on her.  What gets passed off in Hollywood films as roguish male charm is exposed in this film as ethically questionable behavior.  This is made all the more important, I think, because the inarticulateness of all the characters (a primary mumblecore signifier) points to moments when they are acting unaware of what they are doing.  At the same time, it bears pointing out that college, for women, has a way of acting to socialize, if not normalize, such behavior.  Yet the film never lets up in its questioning of our assumptions about this world.  Just when we think Marnie is really a misfit, an attractive coffee guy flashes a look at her from over the counter—Marnie and another female research assistant afterwards talk about him, suggesting that the balance of power in gender relationships can shift at any moment.

Marnie does appear to be in the initial stages of putting together a plan to leave.  And, of course, with whom does she bring this up but Alex, over a lunch in the park.  Yet the dialogue is hard to pick up; our attention is distracted by two somewhat ridiculous looking young men playing Frisbee close by.  It is as if the film is showing us how all momentous occasions (as this one will turn out to be as we will see) take place around other people, which affects what is being said, possibly being thought.

And true to the film’s leisurely pace (another reason why a scene in a park works as the finale), Marnie brings up the issue of leaving in the form of a standard chat-among-friends what-if question: “Hey, if you could move anywhere, if you were moving out of here, just anywhere in the country, or anywhere I guess, where would you move?”  Alex does not directly answer, instead giving the premise of the what-if question a further spin: “I dunno. I guess a better question is: if you were thirteen feet tall, would you rather be that or have eyes on the stalks on top of your head?”

Just as in the previous exchanges, Marnie keeps up with him.  Yet when he makes an offhand comment, largely inaudible, meant to signal (if we look at his body language) a beat or pause in the conversation—to turn it into a scene that he can control (like he tends to do), Marnie’s sudden laughter overlaps with his gesture.  To which Alex can only reply, “No dice.”

In a Hollywood film, this moment would be acted so much larger, spelling out the turning point in Marnie’s life.  Conversely, in this film, it merely suggests that Marnie may have a new way of looking at the world and her place in it.  That, however, is enough in the real world, as opposed to the fantasy world we view in most other films.