D.O.A. has had an unusual influence on noir.  Its dialogue is pedestrian, its story is overwritten, its performances are workmanlike, and its cinematography is often—though not entirely—unremarkable.  But it’s next-to-impossible to resist the film’s hook.  D.O.A. feels less like a movie in its own right and more like the first installment of a really promising game of exquisite corpse.

The movie opens with Frank Bigelow (Edmond O’Brien) walking into a police station.  A few days ago, Bigelow was a dull man with dull problems and priorities; now, he tells the police, he needs to report a murder, and the murder is his own.  He’s been poisoned.  There is no antidote.  Bigelow is a doomed man trying to spend the last hours of his life solving his own murder.

There are D.O.A. remakes and even a D.O.A. musical, but more importantly, there are scores of D.O.A. off-shoots that simply steal the premise and move on.  Credit where credit is due: this sometimes-plodding film created an idea so automatically riveting that it would go on to become a cliché.*

And the film doesn’t entirely squander its premise.  There’s a doomy fatalism to Bigelow’s quest to solve his own murder.  While subsequent takes on the story sometimes change it so that the poisoned person must solve the murder in time to find an antidote, Bigelow is doomed from the start: when he’s diagnosed, the doctor ominously tells him, “There is nothing anyone can do.”  Bigelow can go home, refrain from exerting himself, and possibly live two weeks at the most, or he can run around Los Angeles and San Francisco chasing after the truth.

He chooses to burn the candle at both ends.  In his early weakness and his later grim determination, he is a recognizable noir figure.  He may die with his girlfriend’s name on his lips, but he’s not going to go home to die with her.  He chooses the maze, chooses the plot, and that’s the noir choice, the selfish but understandable commitment to his own goal.  He is poisoned because he’s merely an unknowing witness, not because he invites his fate, but he gets his death on his own terms.  He’s vaguely unpleasant at the beginning and vaguely unpleasant at the end, but he goes from passive to active, and there’s satisfaction in that.

It’s just a shame that there’s so much chaff surrounding the wheat.  Bigelow has a kind of atavistic appeal, eventually, but he’s also a particularly uninteresting schmuck.  He’s stringing along Paula, his girlfriend (Pamela Britton); there’s an implication he’s already cheating on her with a hair stylist, and as the film opens, he’s abruptly ditching her to take a solo vacation in San Francisco.  You could have a neon sign saying I’M GOING TO FUCK hovering over his head at this point and it wouldn’t make things any more obvious.  In case you were in any doubt, the film makes the bizarre choice to incorporate an almost incessant wolf whistle sound effect in Bigelow’s early scenes in San Francisco: whenever an attractive woman appears on screen—which is often—Bigelow looks at her and the slide whistle wobbles to let you know that she’s been deemed fuckable.  This thankfully cuts out once the poisoning starts up, because presumably director Rudolph Maté could work out that constant mental wolf whistles and certain death don’t go together.  Would that he could have worked out that they didn’t go with anything. 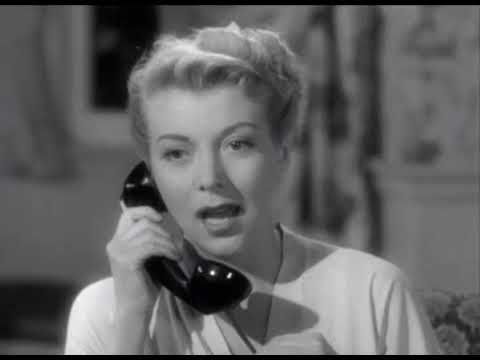 Paula knows the score and tries, futilely, to lean into it, telling him, “There’s nothing you can do that you ever have to feel guilty about.”  In a genre filled with vivid female characters, Paula is reduced to making loving, endlessly forgiving phone calls; if she ever gets mad at Bigelow, she’s over it a scene later.  She’s both his girlfriend and his secretary, following his life and having none of her own.

The most interesting part of the film, besides the opening, is Bigelow’s pre-poisoning time in San Francisco, where the movie succeeds in offering up an intriguing time capsule of Middle-Class Whiteness, 1949, a world where you could casually demand a pack of razor blades and a dry Manhattan from a bellhop, where people leave their hotel room doors open like they’re in a college dorm room, and where a jazz club is a slightly baffling normal experience but an established “hip” one.  (D.O.A. is oddly endearing about piling on the new slang in the night club scene: the characters roam around exclaiming about coolness, hipness, and things being “really silk.”)  We even get a snippet of stranger-on-stranger seduction, startling to Bigelow in its openness: “You’re lonely in a big city.  You don’t have to go through a whole routine with me.  I like good company too.”

After that, sadly, we get into the plot, which is a mess of character-shuffling, possible iridium theft, affairs, and what I can only think of as a reverse Columbo move that Bigelow inexplicably practices more than once, letting someone know at the end of an interview that he has realized that they have admitted to knowing information they shouldn’t but then smirking and leaving rather than following up on it. 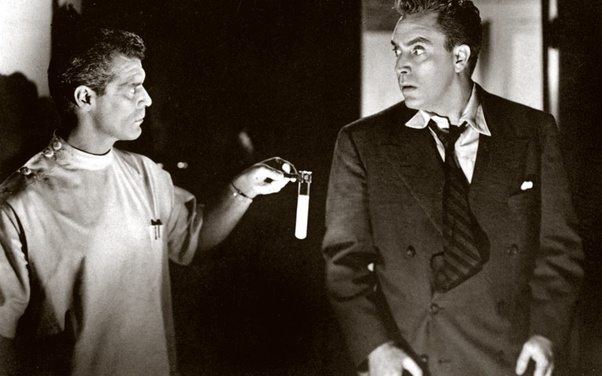 The dialogue, never great, deteriorates, giving us gems such as, “I suppose he died from whatever people usually die from,” and “Doctor, I want you to examine me for luminous poison.” / “Yeah, you’ve got it all right.”  Should you happen to miss that the poison Bigelow was dosed with is luminous, don’t worry, it’ll be reiterated approximately a hundred and fifty more times, always phrased with the same baffling combination of vagueness and specificity.  What poison?  Doesn’t matter.  Is it luminous?  Oh, yes, very.

But in the end, nothing, not even mediocre execution, can spoil the pleasures inherent in D.O.A.’s premise, and any movie that coins such a specific Man in Impossible Situation hook has its charms.  And even at its worst, when the pacing is a slog and the story is nonsensical, the film manages an odd, appropriately nightmarish vibe, one where the same people, sights, and turns of phrase come up over and over again.  Frank Bigelow’s ruined vacation ultimately deserves its spot in cinema history.

* I first encountered D.O.A.’s setup as a child in a Sweet Valley High offshoot book, the sure sign that the trope, like Frank Bigelow, has become the walking dead. 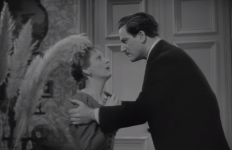