Browse: Home / Year of the Month: Jake Gittes on The Lineup

“It inspired Bullitt, which is a yawn by comparison.”

In front of a San Francisco pier, a porter grabs a newly arrived passenger’s bag, throws it in a taxicab, runs away. The cab takes off, drives into the side of a truck, has to back up, start again. A cop’s in front of it. The cab runs him over; he lives just long enough to put a bullet in the driver through the back window. The cab crashes, for good. This all happens within the first minute of The Lineup, and Don Siegel’s crime thriller scarcely lets up for the remaining eighty-five. Lt. Ben Guthrie (Warner Anderson) and Inspector Al Quine (Emile Meyer) initially have no explanation for what just happened at their crime scene. Soon, they will. Inside that bag, there’s a statuette, bought in Hong Kong for $20. Inside that statuette, another bag – with a quarter kilo of pure heroin in it. And that won’t be the only instance of unsuspecting travelers returning to the city with this kind of luggage planted on them this week.

For its first twenty minutes and change, The Lineup is solid but unexceptional, as Guthrie and Quine talk to witnesses, gather clues, and determine that they’re dealing with a large-scale drug smuggling operation. Having established that, they fade into the background. A plane flies into San Francisco; on it, Dancer (Eli Wallach) and Julian (Robert Keith), sent from Miami to collect three more bags of heroin that are due to arrive with different passengers later that day. Dancer is short, brawny, energized, sardonic; Julian is tall and mustachioed, both foppish and cadaverous, treats the younger man as equal parts protégé, partner, and object of fascination (“He’s a wonderful, pure pathological study,” he observes of Dancer. “A psychopath with no inhibitions.”), and has a habit of collecting and analyzing the last words of people unfortunate enough to get killed by his companion. From the moment they appear, The Lineup is their movie — and it kicks into high gear.

This odd structure takes a little getting adjusted to, and could use explaining. The Lineup was the film adaptation of the mid-’50s TV series of the same name (later syndicated as San Francisco Beat), also shot on location in Bay City and starring Anderson; Siegel had directed its pilot episode, and was called in for the movie. (“Too hot… too big… for TV!”, roared the tagline.) On the film’s highly entertaining DVD commentary, in between laughing nervously at James Ellroy going full James Ellroy in response to what he’s seeing (“I herald a new era of suppressive police methods”), Film Noir Foundation president Eddie Muller claims that the director was not in fact remotely interested in the show’s characters and didn’t even want to call the film The Lineup, having been attracted specifically to the pair of antisocial psychopaths let loose in San Francisco. This would explain the TV-episode feel of the opening stretch, and the relative insignificance of the actual lineup scene, in which the passenger from the first scene is called in to identify the porter who grabbed his bag and fails to do so. The porter soon turns up dead; the lineup reappears only once — in dialogue, as a potential threat: “It’s your mug in the lineup, not ours, if we get caught.” 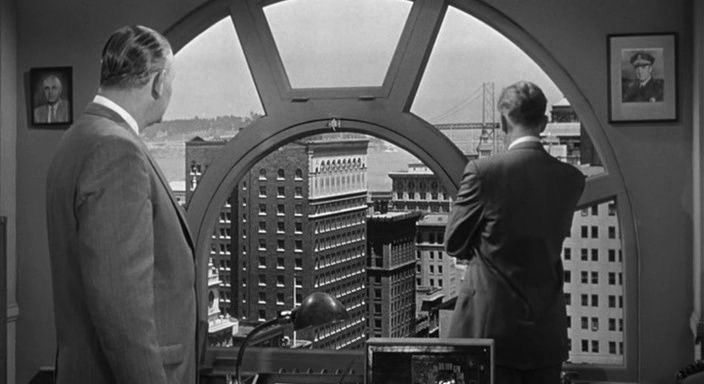 Whatever Siegel’s actual motivations for doing the movie, he was too much of a professional to let any part of it go to waste, and comparisons between the two pairs of protagonists he ended up with, and how he approaches both of them, are inevitably significant. Anderson’s Guthrie, with his cool intelligence and gravelly, authoritative voice, and Meyer’s heavyset Quine, whom Ellroy characterizes as “the guy who’d drag you to the back of the precinct, beat the shit out of you with the phonebook,” are basically dogged policework personified; they don’t have time to be anywhere other than on the job, are generally unconstrained by demons, flaws or complexity (although Quine does get some nice shading in the form of his quiet but persistent initial disbelief that the passenger who got the drugs across the border could be innocent; he never becomes at all aggressive, but you get the sense that this guy needs to be controlled), and the camera rarely gets to lock in on their faces, mostly watching them move from behind or from the side. If they come off as a natural part of the San Francisco landscape, Dancer and Julian feel imposed on it, their figures standing out more harshly against open spaces. Siegel’s work, as Muller observes, becomes more inventive when he’s filming them; he allows himself flashy mirror shots, gives Wallach and Keith monumental, screen-filling close-ups. They’re disruptors of the peace, more colorful and interesting – but more unstable, too. More prone to mistakes. 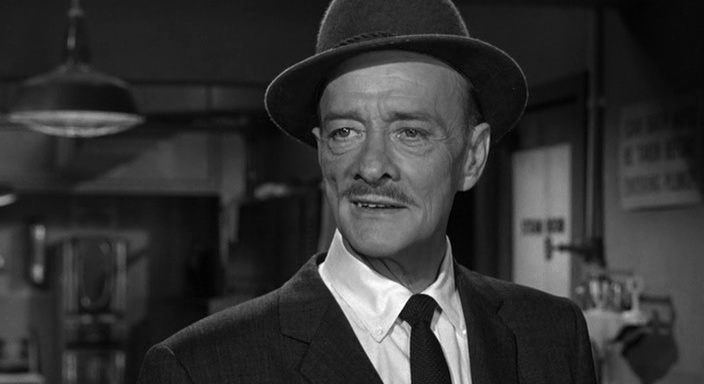 That cab driver in the beginning, he made a mistake —- got shot up before the job. It increased his anxiety, reduced his coordination. Got him and another man killed, and The Man — the head of the operation — never got his hands on over $100,000 worth of business. The operation itself had made a mistake, hiring a junkie as a wheelman — and this streak does not escape Guthrie and Quine. “Folsom’s full of mistakes,” the latter notes matter-of-factly. Cue Ellroy: “Criminals are indigenously fucked up.” Dancer, Julian, their wheelman — a cocky, blonde young guy who talks too much and drinks on the job — aren’t Coen-esque idiots; they’re prepared to do what they’re tasked to, and the people who make the mistake of underestimating them pay the full price. But they each have their weaknesses, and the situation they operate within is flawed, even faintly absurd, from the start: despite the risk of sending its own, known men through customs with drugs, what organization would prefer to plant something so valuable in the belongings of ordinary travelers, then have to laboriously track them down all over town and try to retrieve the dope without arousing suspicion — and all on a tight deadline? 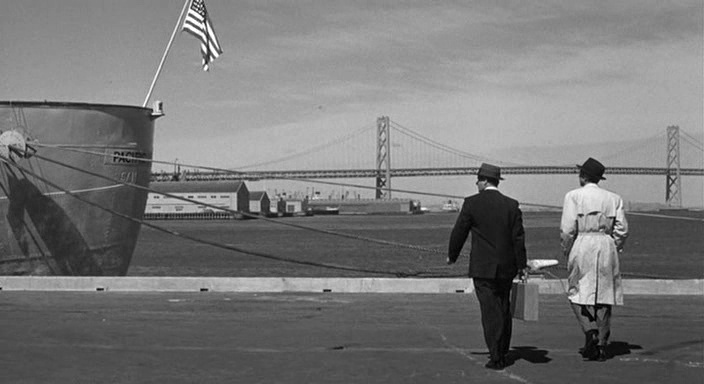 To what extent Stirling Silliphant, who wrote the screenplay, intended this incongruity is hard to tell — yet, regardless, it serves the film well, enabling some of its most compelling qualities. One doesn’t have to be a native of The Lineup’s setting to recognize it as an all-time great San Francisco movie, up there with the same year’s Vertigo, as the camera captures the characters in and around a handful of the city’s landmarks, some of which don’t exist anymore; these include The Seaman’s Club and, most notably, the massive Sutro’s museum and ice skating rink, which burned down eight years after the film’s release. (On the commentary, Muller, born and raised in San Francisco, never misses a chance to identify and talk about these settings.) It’s all too easy to take for granted that the reason we get to see so much of the place is because of how thoroughly it has been infested with crime, represented by both the drugs and the men who make their living chasing them. The twisted thing about The Lineup is that it’s not twisted at all. As noir, it’s not shadowy or crooked; it takes place on a beautiful day, in bright sunlight. Its style is clean and steady, and unfazed about it. And its villains are its protagonists, mingling with the ordinary folks, who are lucky if they never get to suspect their true nature; they invade public places and quiet homes, make friends with lonely women, murder, and kidnap.

And what are they to do when they’re faced with something that truly, and intentionally, brings out the absurdity in their mission — like, say, a little girl who’s found and used an entire bag of heroin in a hilariously harmless fashion? “When you live outside the law, you have to eliminate dishonesty,” declares Julian in an earlier scene; so, in an almost touchingly childish display, they decide to be honest. That, too, proves a mistake. In the film’s best scene, Dancer meets The Man, and The Man meets Dancer. Both make a mistake in assuming that they know how to deal with the other, and both own the hell out of each other in ways specific to them. But the film is not done yet – and it caps itself off with nothing less than a pull-out-all-the-stops car chase. If much of The Lineup is ultimately about the thrill of watching vicious people find their way out of tight spots until they no longer can, then this sequence, which even turns the obvious use of rear projection into an intensity-raising weapon, acts as the movie’s climax, summation, and essence all at once, finally stripping all conflict down to pure movement that only stops when the spot literally becomes too tight. The siren on top of the Ferry Building blows: it’s 4:30. All this, and the day is not done yet.