Ever since 2010’s fascinating (that doesn’t mean good or watchable, for the record) experiment I’m Still Here, Joaquin Phoenix has been reinvigorated as an actor. He’s gotten choosier about what he acts in (I’d like to believe that he’s rooting out the Ladder 49s and Reservation Roads at this point), he’s showcased astonishing range from role-to-role, and he’s brought high-waist pants and mustaches back in style. His run of The Master, Her, The Immigrant, and Inherent Vice is the stuff dreams are made of, and that’s if you don’t count Irrational Man, which you should, because it’s great. It seems like he can do no wrong. M. Night Shyamalan, on the other hand, can do wrong and has done plenty wrong. He and Phoenix worked together on Signs and the way-underrated The Village (my love for that is the hill I am going to die on), and perhaps it’s telling that the quality of Shyamalan’s output fell off a cliff after he stopped working with Phoenix. But the early Letterboxd reviews of Shyamalan’s latest, The Visit, suggest that it could be Shyamalan’s return-to-form (although I’ve also heard good things about Wayward Pines) even without Phoenix, and now comes news that Phoenix may be coming back to the fold.

Phoenix is in negotiations to star in Shyamalan’s next film, which will begin shooting in November. Nothing is known about the film besides this, and that it will be produced by Blumhouse Productions, the studio that turns low-budget horror movies into box office gold (they’re producing The Visit as well). The budget is likely going to be somewhere around Visit‘s $5 million, and that kind of restriction should be good for Shyamalan, given that his very worst films were made for upwards of $70-150 million. And Phoenix even possibly signing on is something of a vote of approval in itself, given Phoenix’s aversion to paycheck work, like him turning down the money-printing machine that is Marvel. If he wants to do this movie, it has to be even a little bit good. Unless he’s doing this solely as a favor to his friend. Or Shyamalan isn’t his friend, and he’s only doing this because Shyamalan keeps calling him and asking him to be in his shitty movies. Or maybe this was his reaction, verbatim, to the offer. 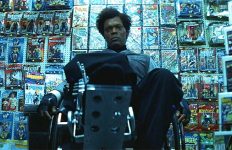 Year of the Month: Sunil Patel on Unbreakable→